'Only Pawar will tell exact date of Maha govt formation'

Prasanna D Zore reports on the backroom drama accompanying the efforts to cobble together the next government in Maharashtra. 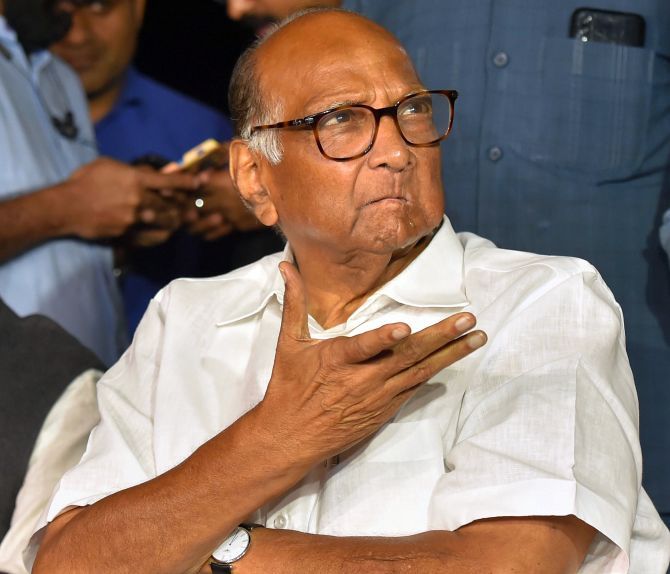 Strongly rejecting the claim made by a top source in the Congress about differences with the Nationalist Congress Party, former Maharashtra chief minister Prithviraj Chavan denied there was any difference of opinion between the Congress and the Sharad Pawar-led party over the issue of who will get how many ministries in the Maharashtra government that is likely to be formed with the Shiv Sena.

Chavan, who was among the Congress leaders to hold a close-door meeting with state NCP leaders at Pawar's home in New Delhi on Wednesday evening, said the common minimum programme has been finalised and "the decision to go with the Shiv Sena will be taken by both of us (the Congress and NCP) and only then will we be discussing the issue of power sharing."

Congress leaders Ahmed Patel and Mallikarjun Kharge along with Chavan and Maharashtra Congress President Balasaheb Thorat were part of the meeting at Pawar's residence.

"There are differences between the Congress-NCP about which party should get how many ministries. While the Congress is insisting upon equal power sharing structure among all the three parties, the NCP is of the opinion that ministries should be distributed based on the number of MLAs belonging to each of the three parties," a source in the party told Rediff.com.

However, this source also said that the issue was not a bone of contention between the two allies and he was confident that the NCP will accept the Congress's stand.

"The Congress will insist upon an equal power-sharing arrangement during the meeting and that will decide if the Congress will join the government or support it from the outside. Getting support of the party high command (Congress President Sonia Gandhi) won't be a big issue once this demand of the Congress is accepted," the source said when asked if ideological differences between the Sena and the Congress was still a thorny issue leading to the delay in the formation of the next government in the state.

"If there were any issues related to ideological differences, then the Congress would never have been part of all the meetings we have had till now," he added.

"We have not yet discussed the issue of deputy chief ministership with the Shiv Sena, but the NCP won't have any objection to a Congress deputy CM," he said.

"These are all rumours. You can believe in any rumour that you want. But I can tell you that nothing like this has happened," said Prithviraj Chavan, refuting reports of the Congress's demand for equal distribution of ministries among all the three political parties now being referred to as the Maha Shiv Aghadi.

Highlighting another important Congress demand, the source said, "The Congress has also asked for the post of Speaker of the legislative assembly which both parties have agreed to."

Against this backdrop, "The purpose of Wednesday's meeting is to tell the people of Maharashtra that we are progressing in the right direction and will form a stable government in the state," he added.

All Congress and NCP leaders are unanimous that the formation of the government in Maharashtra will have to wait till the time Sonia Gandhi and Sharad Pawar don't give their go-ahead which will happen only after Shiv Sena President Uddhav Thackeray gives his nod for the same.

When asked if the people of Maharashtra don't deserve a government at the earliest, this source quipped, "Only Pawarsaheb will be able to tell the exact day and time of the next government formation in the state."

He also claimed that the meeting on Wednesday evening was a mere formality as "the Congress, NCP and Shiv Sena have agreed on most of the issues of the CMP in a series of meeting held in Mumbai between the senior leadership of the three parties."

How CMP was forged by hoodwinking the media

Sharing interesting details about the number of marathon meetings that lasted anywhere between five and eight hours at different locations, away from the prying eyes of the media, this source revealed that the very first meeting of the Congress and the NCP was held at the Oberoi Trident hotel at Nariman Point in downtown Mumbai and not at the Trident, Bandra Kurla Complex, north west Mumbai.

As the media got a sniff of this crucial meeting between the Congress and NCP on the evening of November 13, it was decided by leaders of both parties to deliberately create confusion.

While some NCP leaders like Nawab Malik insisted that the meeting will be held at the Trident, BKC, Ajit Pawar declared he was not available for the meeting as he had to rush to Baramati.

The same evening, Manikrao Thakre, former state Congress president, told Rediff.com that the meeting had been deferred and would be held the next day.

"We wanted to avoid the media and so we decided together to talk in different voices," this source said.

With the media off their backs the leaders quietly met at the Oberoi Trident, Nariman Point.

"This meeting lasted for about five hours as the senior state leaders of Congress and NCP burned the midnight oil to chalk out the broad contours of the CMP," said the source.

While one of the many meetings that saw the leaders of the three parties ensconced within the comforts of the Trident, BKC, the crucial meeting that had all these leaders agreeing to the CMP happened at the Mumbai Education Trust, Bandra, north west Mumbai, an educational institute owned by former home minister and senior NCP leader Chhagan Bhujbal.

"We have had marathon meetings which extended up to eight hours at a stretch in the first few days of the coming together of the Congress-NCP-Shiv Sena," he said.

When asked, Bhujbal refused to comment if any of these meetings were conducted at the MET.

He said he was positive of the outcome of the intense negotiations happening among the leaders of the NCP, the Congress and the Shiv Sena and Maharashtra will soon see the formation of a new government.

When asked how decisive will this evening's meeting turn out to be, Bhujbal said, "All high-level meetings end with important decisions, but this meeting can be considered as just another decisive step in the formation of a stable government in the state."

The farmers loan waiver remains the top-most agenda of the next state government.

The second important agenda will be creation of more jobs in the state and filling the vacancies in government jobs on a war footing.

There was no hiccups during the discussions on the CMP as all the three political parties shared each other's views and concerns regarding the welfare of farmers, unemployment and emphasising on skill development programmes for the youth. 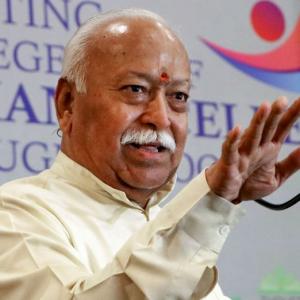