Not only is your privacy stripped stark naked, says Mitali Saran, the system itself is illegal and vulnerable.
Illustration: Uttam Ghosh/Rediff.com 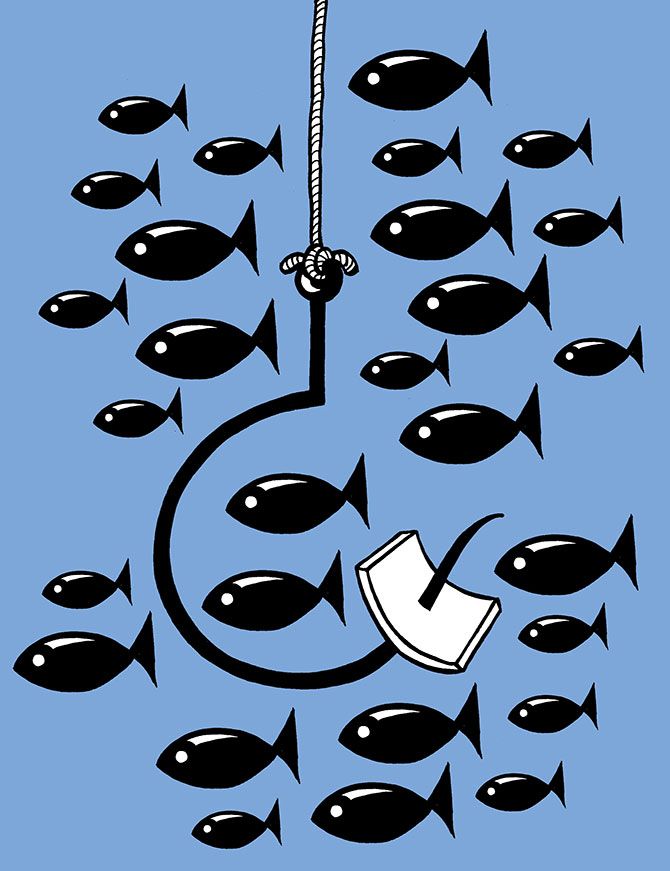 We live with chronic anxiety about the documents that get us the entitlements and paid services we need -- food, cooking gas, SIM cards, sale deeds, passports and so on.

We're so tyrannised by bureaucracy that when we hear of an official document that might simplify life, we fall upon it with cries of joy.

We laminate and file it, make 294 copies of it, and scan the sucker just to be sure.

Thus it was with Aadhaar, the biometrics-based unique identification number.

It was going to be purely voluntary, and could be used in lieu of other identification.

Imagine that -- one piece of paper to cut through the mess!

A billion of us ran out and got it.

It's got to be the biggest bait-and-switch in history.

I failed to educate myself about how the Unique Identification Authority of India, UIDAI, was building and handling the database to which I was voluntarily offering my most intimate, personal, irreplaceable biometric information -- fingerprints and iris scans.

Critics of Aadhaar have been trying for years to alert us to its real and serious problems, mostly in vain.

Today, as we discover that our voluntary, secure, private information is no longer voluntary, or secure, or private, their voices ring loud.

Here's my five-point layperson's recap of the most disturbing problems put forward by legal scholars, economists, and technology and security experts.

We all need to consider them, and read up on them, before blindly furnishing our Aadhaar numbers.

Imperfect authentication: Some people's fingers are too cracked or dirty for prints to properly register.

Authentication failure means that millions of people could be turned away from their entitled food rations, despite having a valid Aadhaar number.

It's illegal: The Supreme Court has repeatedly stated that Aadhaar is voluntary, and barring further orders, nobody can be denied anything for lack of it.

Despite that, the government is trying to hugely widen the range of services for which Aadhaar is mandatory.

The Aadhaar Act, forced through the Lok Sabha as a Money Bill last year, makes enrolment compulsory for those wanting subsidies.

This year, the BJP used the Finance Bill to smuggle in many more Aadhaar requirements, including for filing income tax, and giving children, whose biometrics keep changing, their midday meals, to which they are entitled not just by law, but by basic human decency.

The cherry on top: The government can also revoke or deactivate your number without notice.

It's not secure: This massive database of personal information is wide open to fraud, attack, and theft.

A dog was issued an Aadhaar number.

If your whole life is Aadhaar-based, a hacker -- or an official -- need only hack one database number to take over your entire identity and assets, or erase you entirely, with no way to appeal.

Not only the government, but also private companies, can access that database.

It enables mass surveillance: The government reserves the right to use your information for 'national security' -- this for a number that any foreign national can get by virtue of being a resident.

Would you trust this government, which prevented a Greenpeace worker from making a presentation in London on grounds of national security, to exercise the slightest rationality in that department?

Would you trust this government, which defends murderous gau rakshaks and denies their crimes, not to enthusiastically profile minority communities?

Would you trust it not to penalise people for their choice of spouse, or food, or entertainment?

But no government is entirely benevolent.

Would you trust any government not to target inconvenient journalists, whistle-blowers, Opposition funders, or political dissidents?

If DNA is ever included in the biometrics, think of how justice might be abused.

Given these and other issues, thoroughly and better articulated by experts like Usha Ramanathan, Reetika Khera, Sunil Abraham, Pranesh Prakash and many others, why this unseemly haste to mainstream Aadhaar? Where's the fire?

Until the Supreme Court has passed judgment on Aadhaar, we'd be wise to read up, and to refuse to be bullied.

As they don't say often enough: Aadhaar in haste, repent at leisure.

MUST READ AADHAR features in the RELATED LINKS BELOW...