'A sense of purpose is lacking in India's diplomacy.'
'This is what happens when foreign policy becomes the stuff for grandstanding before the domestic audience,' says Ambassador M K Bhadrakumar. 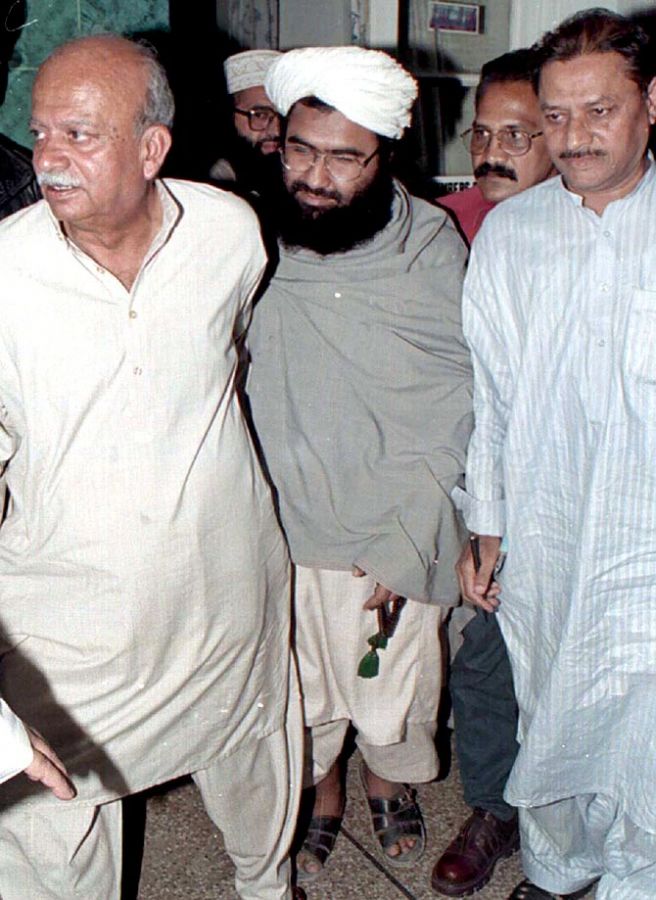 IMAGE: February 4, 2000: Masood Azhar leaves the Karachi press club after a news conference where he announced the founding of the Jaish e Mohammad.
He had been freed from an Indian prison along with two other terrorists in exchange for the passengers and crew of the hijacked Indian Airlines flight IC-814. Photograph: Reuters

The Chinese reservation about placing a technical hold on the listing of the chief of Jaish-e-Mohammed Masood Azhar as a 'global terrorist' by the United Nations security council does not come as surprise.

The Chinese foreign ministry spokesman in the recent days had made it amply clear that its stance remained unchanged, no matter the media hype in India.

One doesn't have to know rocket science to figure out the rationale behind China's stance. Pakistan is a key ally of China's -- and probably, the only steady ally -- and Beijing is obliged to its 'iron brother'.

Moreover, in the prevailing regional and international environment, the Sino-Pakistan alliance has assumed a global character.

Conceivably, Beijing assesses that the entire campaign about Azhar is less about terrorism than a concerted strategy to weaken the Sino-Pak alliance. The UN security council is not known to work on the basis of altruistic principles and politics is hard ball.

Indeed, the issue of terrorism is riddled with doublespeak.

The Western troika within the P-5, which has piloted the move on Azhar, are not lily-white. Syria and Libya are living examples of their close nexus with terrorist groups, including the jihadi breed.

In the case of Azhar, there is also the added factor that the recent positive trend of China-India relations is an eyesore for the West, given its profound implications for the security of the Asia-Pacific.

On the other hand, the three NATO countries who belong to the P-5 in the UN security council are intensely conscious that Pakistan is pivotal to an Afghan settlement in which they are stakeholders, and annoying Islamabad unduly at the present juncture is certainly not in their interests.

The sum and substance of it all is that the US, UK and France are dissimulating -- running with the hare (by courting/placating India) while also hunting with the hound (by mollycoddling Pakistan).

Truly, India finds itself in an unenviable position. It has painted itself into a corner by grovelling at the feet of the 'P-3' (the US, Britain and France) in the New Cold War conditions, while also aware that these Western powers are by no means India's 'natural allies' in its struggle against cross-border terrorism.

The Indian foreign policy establishment would know that the West's 'maximum pressure' strategy never works with Beijing -- and, arguably, it is not even meant to work.

Suffice to say, the Modi government's intentions are unclear. Surely, it is no big deal even if the UN security council brands Azhar as a 'global terrorist'. Similar gentlemen with chequered past from Afghanistan who used to figure in the UN list of global terrorists are nowadays holding structured talks with US Special Resentative Zalmay Khalilzad in Qatar.

And this is happening in spite of the UN's travel ban on them. The US, in fact, released 5 of them from Guantanamo Bay in a prisoner exchange that enabled them to reposition in Doha as America's interlocutors.

And, make no mistake, they were hardcore terrorists. These are hard realities.

Finally, Delhi should clinically reassess whether it can legitimately expect any improvement in the crisis situation in Jammu and Kashmir even if Azhar's movements were to be restricted.

All indications are that Azhar is so gravely ill that he is unable to travel outside his home. Herein lies a sordid tale.

Nonetheless, if the Modi government estimated that it is tactically advantageous to launch the Azhar project in the UN security council 1276 Committee, it can only be because the project has a big optic in the domestic audience. (It is doubtful if the world community loses sleep over Azhar's whereabouts.)

Of course, another BJP government had set free Azhar from an Indian prison and delivered him safe and sound (with VIP escort) to the Pakistani ISI on the tarmac of Kandahar airport some 20 years ago.

That shameful legacy seems to haunt the BJP and makes a mockery of its Hindu meta-nationalism and its posturing as the Praetorian guard of the national security state.

Simply put, the Azhar project becomes, in a manner of speaking, an act of atonement by the Modi government.

Secondly, the Azhar project helps divert attention from the complete policy failure in J&K by attributing to cross-border terrorism the sole reason for the crisis situation in that state.

Whereas, Indian security analysts who held authoritative positions in the intelligence and defence establishment, open concede that while Pakistan exploits the ground situation in J&K, the insurgency as such is largely indigenous today and stems from a profound disconnect between the people and the Indian State.

Thirdly, paradoxically enough, the Azhar project, which is the equivalent of what arm-chair strategists would call 'passive defence' (against Pakistan), grates against the government's most recent 'active defence' strategy (focused on 'pre-emptive' action), which it unveiled by attacking Balakot in Pakistan.

Now, when the Azhar project crash-lands in New York, our overall deterrence gets weakened insofar as our strategic vocabulary becomes inchoate.

Clearly, the Azhar project in the UN security council is a road to nowhere. It is needlessly complicating India's relationship with China, which has a raison d’être by far exceeding the fate of a Pakistan-based terrorist.

Again, lest it annoyed India, the world community may desist from using the 'K' word, but we should not take this as implying that they are oblivious of the 'root cause' of terrorism in the sub-continent.

The bottom line is that the Modi government started with a bang in 2014 with the PM personally initiating a bid to secure permanent membership of the UN security council for India and has ended with a whimper on Wednesday by struggling to get an ailing terrorist nearing the sunset of his life branded as global terrorist.

A sense of purpose is lacking in India's diplomacy. This is what happens when foreign policy becomes the stuff for grandstanding before the domestic audience.