The resurgence that Congressmen feel is more sentimental than substantive, and the reality is that the Congress is a party in terminal decline since 1989, says Shekhar Gupta. 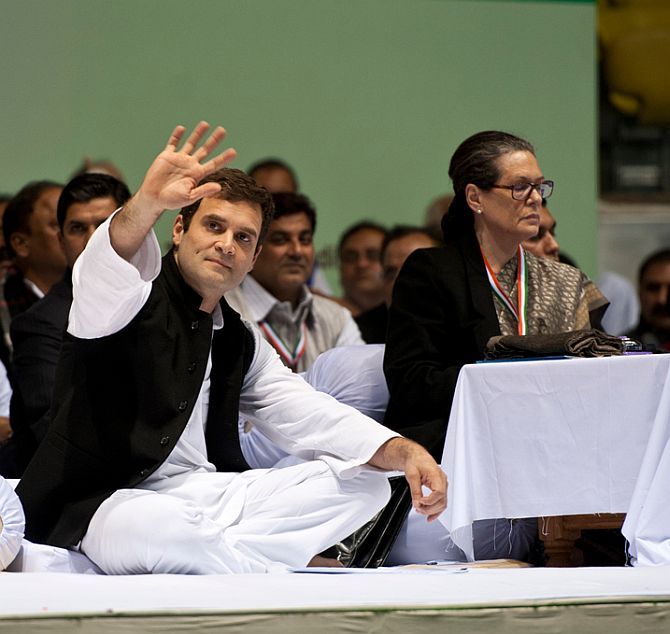 For the first time in three years, Congress-people are smiling. It is as if a revival of their party is on the way.

There is a revival -- but it is limited to their return to front pages, and also for five good reasons.

One, the success of their more realistic and humble strategy in Bihar.

Second, the win in the Lok Sabha by-election in Ratlam. There is nothing dramatic about ruling parties losing bypolls, but this is in a state which is a Bharatiya Janata Party stronghold, where the Congress had won only two seats (the personal pocket boroughs of Kamal Nath and Jyotiraditya Scindia) in 2014. For an even clearer perspective: it is only the ninth Lok Sabha seat for the party, as you drive from Kashmir to the border of Karnataka, out of 175.

Third, there are rumblings of discontent -- even if mostly by the seniors -- for the first time since the Narendra Modi-Amit Shah takeover over of the BJP.

Fourth, much more than Delhi, Bihar has now showed that the Modi-Shah charge can be stopped if the opposition comes together, offering a script for the elections coming up in the next 18 months. This has emboldened the BJP's many critics, in civil society, intelligentsia and popular culture, and the fear of the motivated taxman and the cop is diminishing.

And fifth, Rahul Gandhi turning vocal, and visible, causing excitement among both followers and foes.

The party has started this session of Parliament with visibly improved morale, and has shaken up its Punjab organisation.

Prime Minister Narendra Modi inviting his predecessors Dr Manmohan Singh and Sonia Gandhi to discuss the GST Bill over tea would not usually be a game-changing moment. But its significance can't be understated in an environment where the BJP had denied its main opposition even the parliamentary courtesy of the Leader of Opposition position. To that extent, this invitation signals the restoration of more normal, peacetime politics.

This is where the good news ends. The resurgence that Congressmen feel is in fact more sentimental than substantive. The substantive reality is that the Congress is a party in terminal decline since 1989. It did come back to power in two spells, 1991-96 and 2004-14. But, since this column appears in a premier financial newspaper, I can use an expression from the markets and ascribe it to "dead cat bounce".

More important than the number of seats is the vote-share pattern. Overall, in the key states of the north -- the Hindi heartland and Gujarat -- the Congress's share has generally declined, with two spikes in 2004 and 2009. Barring those two, its default score has been just over 20 per cent. So there is a trend, a secular decline.

A more revealing way of looking at this is the way vote shares have shifted in key individual states. As the Congress has declined, the BJP has gone up, and so have the regional parties. It means that the BJP is taking only some of the Congress votes. Regional challengers are picking up the bulk.

Our analysis of individual states shows you that, wherever a local party with a Congress-type ideology or underclass appeal has risen, the party has ceded its vote share to it. It started with Mandalites and Mayawati in the heartland and later spread from there -- its place being taken by Naveen Patnaik in Odisha, Mamata Banerjee in West Bengal, Jaganmohan Reddy and K Chandrashekhar Rao in Seemandhra-Telangana, and finally Arvind Kejriwal's Aam Aadmi Party in Delhi.

It is also significant that once the Congress has ceded its vote-share to a new force, it has rarely recovered -- at least, not lately, as Y S Rajasekhara Reddy's winning back of Andhra Pradesh from the Telugu Desam Party was a long time ago. It may be looking down the same barrel in Punjab in 2017, with the AAP growing there.

None of this justifies the party's achche din feeling. The five positive pointers we listed do not add up to a revival. These do not alter the fundamental reality of the Congress: an absence of leaders, big ideas, focus, and most importantly, internal democracy. The party's internal institutions, from the Congress Working Committee at the top, have all gone into a deep coma over the years. It will take more to revive them than the occasional "suit-boot" excitement.

The absence of leaders is the party's biggest weakness. Most senior leaders are getting old, at least according to Rahul Gandhi's comfort level. You can accuse the BJP of building a personality cult, but the Congress has it fully institutionalised. Taking their cue from the Gandhi family, many of its senior leaders have built their own mini-dynasties, killing internal competition and opportunity.

For the BJP, while Modi won all the seats in his state, so did Vasundhara Raje Scindia in Rajasthan, Raman Singh in Chhattisgarh and Shivraj Singh Chouhan in Madhya Pradesh (all but two). The Congress has no such leaders anywhere; the last such was YSR.

In Uttar Pradesh, Bihar, Madhya Pradesh, Odisha, West Bengal, Chhattisgarh, Jharkhand and even Maharashtra and Gujarat, there is nobody. The party's only strong leader, Siddaramaiah in Karnataka, is a recent import.

The party will need to deal with this lack of talent in the state elections next year. It has ruled Assam for three terms, but the old Gogoi is too old, the young Gogoi is not yet ready and the most talented other, Himanta Biswa Sarma, has defected to the BJP out of frustration. If the BJP continues its polarisation strategy, a Bihar-like coalition will provide Congress an unexpected opportunity in Assam; but the absence of a face will be a liability.

The Congress dropped to an all-time low vote share of just under 20 per cent in 2014. But, if you look at it from an angle other than voting percentages and the number of seats, it got nearly 115 million votes even in such a rout. It's also got time -- but only if it can stay together.

Many years ago, a top Singaporean diplomat had said to me: given how long your politicians last, and how young Rahul is, one day he will be your prime minister.

Such things are no longer inevitable. There may be the odd stirring in the mostly dead cat, but it will take more than a few good jabs and jibes to bring it back to its feet. 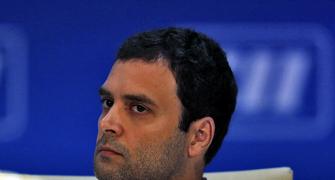 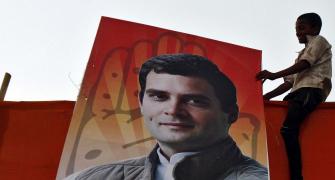 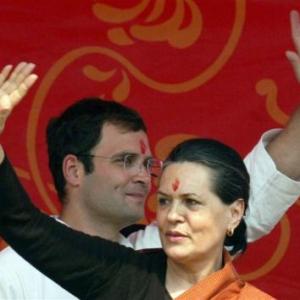 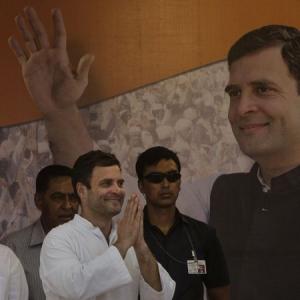 'Rahul to take over Congress by March or even earlier'