India, however, would be well advised to take this decrease in Chinese defence spending with a pinch of salt, writes Harsh V Pant.

After nearly two decades of double digit increases in its military budget, China last week announced a mere 7.5 percent jump in defence budget this year. This was the first time since the 1980s that China's defence spending increased in single-digit percentage.

The Chinese government maintained that while this increase will be used to enhance China's ability to meet various threats, the nation remains "committed to peaceful development and a military posture that is defensive in nature."

At the domestic political level, it was important for the Chinese Communist Party to control its expenditure patterns in light of the toll that the global financial crisis has taken on the Chinese economy, especially the crucial export sector.

China's massive economic stimulus programme and the attempt by the government to devote more resources to the social sector in light of growing socio-economic tensions may have forced the CCP to divest the defence sector of some of its resources. The CCP leadership is extremely sensitive to the charge that it is not adequately addressing domestic socio-economic issues and in light of rising unemployment, increasing military expenditure substantially would not have gone down well with the ordinary Chinese.

It is not without significance that this year's session of the National People's Congress is expected to see a shift in spending priorities toward affordable housing, education, health care and other social programs.

At the global level, the exorbitant increases in China's military expenditure over the last several years have been generating concerns among the major powers and China's neighbours. A growing economic power, China is now concentrating on the accretion of military might so as to secure and enhance its own strategic interests.

China, which has the largest standing army in the world with more than 2.3 million members, continues to make the most dramatic improvements in its nuclear force among the five nuclear powers and improvements in its conventional military capabilities are even more impressive. What has been causing concern in Asia and beyond is the opacity that seems to surround China's military build-up, with an emerging consensus that Beijing's real military spending is at least double the announced figure.

The official figures of the Chinese government do not include the cost of new weapon purchases, research or other big-ticket items for China's highly secretive military and as a result, the real figures are much higher than the revealed amount. From Washington to Tokyo, from Brussels to Canberra, calls have been rising for China to be more open about the intentions behind this dramatic pace of spending increase and scope of its military capabilities.

As a result, the relatively modest increase this year might be an attempt to signal that China is not as aggressive as some might think. Beijing has also tried to be more transparent about its defence spending. In an attempt by the Chinese government to assuage the concerns around the world about its rapidly growing military capabilities, it has been releasing White Papers on Defence for the last several years.

India, however, would be well advised to take this decrease in Chinese defence spending with a pinch of salt. According to the Chinese government's assessment, China's military spending had expanded by 14.9 percent over the 2008 total but in reality the spending grew at a greater rate because the Chinese military ended up spending around $2 billion more than anticipated.

Even this year's actual spending could be as much as two and half times the official estimates as it does not include purchases of foreign weapon systems. Beijing significantly under reports its military expenditures. Meanwhile, China has started asserting its military profile more significantly than before. Last year, Chinese vessels tackled Somali pirates in the Middle East, the first time Chinese vessels operated outside Asia. Beijing is also considering sending combat troops abroad in support of United Nations peacekeeping efforts.

Chinese military officers are openly talking of building the world's strongest military and displacing the US as global hegemon, by means of a war if need be. This might be a bit premature at the moment as the US military still remains far more advanced than China's, which does not yet possess the capability to challenge the US far from Chinese shores. It's China's neighbours who should be worried about, especially as the US starts to look more and more inwards.

China's sustained military build-up will continue over the next few years and this will pose a challenge to Indian military planners as India's military's modernisation programme is fast losing momentum. India will need a carefully calibrated response to China's rise, one that adequately protects Indian interests.

So far the Indian armed forces and the Indian government have not demonstrated that they realise the true extent of the challenge they are facing in their neighbourhood. It would be tragedy if the hype about this year's modest increase in China's defence budget lulls the Indian establishment into a sleep that this nation can't really afford. 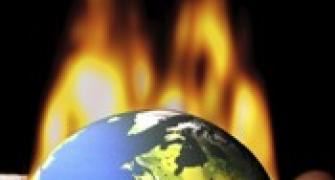 India, China back Copenhagen Accord