The Kartarpur corridor was an excellent opportunity for the Congress to seize centre-stage in Sikh religious affairs.
After all, the Akalis never achieved this in their years in power, says Sanjeev Nayyar. While Punjabis worldwide celebrate the opening of the Kartarpur corridor, it is also a subtle move by Chief Minister Captain Amarinder Singh to assume a central role in the Sikh Panth.

Before I go on to explain, first, a background.

In 1902, the first Sikh political organisation, the Chief Khalsa Diwan, was founded. It was a coordinating body for the Singh Sabhas.

Although the Singh Sabha movement died out in the 1920s, it awakened the Sikhs. They questioned why the job of a granthi (scripture reader) was done by members of the Udasi order (who believed in idol worship, and not followers of Khalsa) even though it was the practice since the Mughal times.

The Akalis took control of the gurdwaras after throwing out the mahants.

The success of these protests against the Udasis produced two institutions that dominate Punjab today -- the Shiromani Gurdwara Parbandhak Committee and the Akali Dal.

The more radical elements organised a semi-military corps of volunteers known as the Akali Dal (army of immortals) to fight for SGPC causes. Its aim was to give expression to a revived sense of Sikh identity.

The Akalis entered into a dispute with the British for the control of Sikh gurdwaras. In 1925, the Sikh Gurdwaras Act was passed. By virtue of its control over gurdwara affairs and revenue, the SGPC became an important body. The Akalis are yet to relinquish control since 1925.

Since then control of Sikh religious affairs, through the SGPC, is the key to political power in Punjab. The Congress has been trying to gain control over it for decades.

On becoming chief minister in 1972, Giani Zail Singh tried his best to wrest control of the SGPC and used every opportunity to placate Sikh religious sentiments and assert Sikh identity. In order to regain the initiative, the Akali Dal working committee passed the Anandpur Sahib Resolution in 1973.

Since then this pattern of politics, competitive communalism and brinkmanship, has been the hallmark of Punjab.

In 2017 the Congress won the Punjab assembly election. Like earlier Congress leaders, Captain Amarinder Singh wanted to gain control over the SGPC. This being very difficult, he wanted to do something so Sikhs would recognise the Congress's contribution to reasserting the Sikh identity.

In November 2018, Sidhu said: 'The seed Imran Khan had sown three months ago has become a plant. It is a happy moment for the Sikh community that the corridor to reach Kartarpur to get Baba Guru Nanak's blessing without any hassle.'

The mistake that the ambitious Sidhu made was that the former opening batsman who started off as twelfth man in Captain Amarinder's team, wanted to become the 'Captain' himself.

Further, Sidhu was seen as an Imran Khan (read: Pakistan) supporter. This came in direct conflict with Captain Amarinder who always spoke against the Khalistan movement and Pakistan, in order to gain the support of the Hindu community and the majority of Sikhs who realised that the violent movement of the 1980s (over 21,000 dead) set the state back by decades.

So the Kartarpur corridor was an excellent opportunity for the Congress to seize centre-stage in Sikh religious affairs. After all, the Akalis never achieved this in their years in power.

What did Chief Minister Singh do?

The state government built an international standard Tent City, spread over 270 acres, at Sultanpur Lodhi that provided free accommodation to 35,000 devotees. According to local sources, the state look the land on lease at a rent of Rs 50,000 per acre per month.

Next the state government is spending over Rs 300 crore (Rs 3 billion) on upgrade of infrastructure such as constructing roads, widening and repairing of roads, new bridges in Sultanpur Lodhi.

The money was made available, notwithstanding the Punjab chief secretary's plea before the Supreme Court that the state could not bear the burden of paying Rs 100 per quintal (non-basmati) to farmers who shun stubble-burning because its coffers were empty.

The Congress chief minister continued to don the nationalist cap so when Pakistan released the official song welcoming Sikh pilgrims which had posters of terrorist Jarnail Singh Bhindranwale etc in the background, he said: 'On one hand Pakistan shows love and on the other they do this. This is very inappropriate.'

We must remember that terrorism in Punjab was defeated by a Congress and not an Akali government.

In order to embarrass the Akalis, the Punjab assembly unanimously passed an unprecedented resolution urging the Akal Takht and the SGPC to allow women to perform kirtan at the Golden Temple in Amritsar.

On the defensive, the Akalis took refuge by saying that that according to Sikh rehat maryada’ (religious code of conduct), Sikh women are not allowed to perform kirtan at the Darbar Sahib.

Another historic move was making the Punjab Vidhan Sabha's one-day special session, to commemorate the 550th birth anniversary of Guru Nanak, a joint session for the legislatures of Punjab and Haryana.

Given the animosity that led to the creation of these two states in 1966 and later, the move is historic. This forced even former chief minister Parkash Singh Badal to say it was an exemplary gesture.

Captain Amarinder's moves on a joint session, no doubt, had Prime Minister Modi's blessings who sees a revival of the Khalistan movement as a hindrance to his idea of a 'New India'. Having said that, Modi is also a politician, as we shall see later.

The state government and the Akali-controlled SGPC prepared separate stages for the inauguration. One stage was close to the integrated check post under guidance of the SGPC. The other was built by the Punjab government at the start of the Shri Guru Nanak Dev Ji Marg, which leads to the site where devotees cross over to Pakistan to visit the Gurdwara Darbar Sahib in Kartarpur.

The stage made by the state government was of no use because Modi inaugurated the integrated check post of the 4.5 km-long Kartarpur corridor at Dera Baba Nanak in Gurdaspur, organised by the Akali Dal and the SGPC.

Conversely, as prime minister, Modi ensured that the central government agency Land Ports Authority of India built a state of the art terminal building, fully air-conditioned with over 50 immigration counters.

He also ensured that those standing by his side during the inauguration were the chief minister, Harsimrat Badal from the Akali Dal, Sunny Deol and Hardeep Singh Puri from the BJP, not to forget walking up to former prime minister Dr Manmohan Singh.

Sanjeev Nayyar is author of a mini book, How The British Sowed The Seeds For The Khalistani Movement Before The Indians Took Over, a chartered accountant, and founder, www.esamskriti.com. Twitter handle @NayyarSanjeev 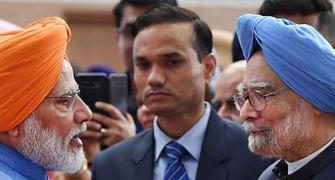