India's assessment is that the Kartarpur project was being implemented with alacrity and military zeal under the supervision of the Pakistan army as it has the strategic objective to use the corridor to encourage separatism in Punjab, say government sources. 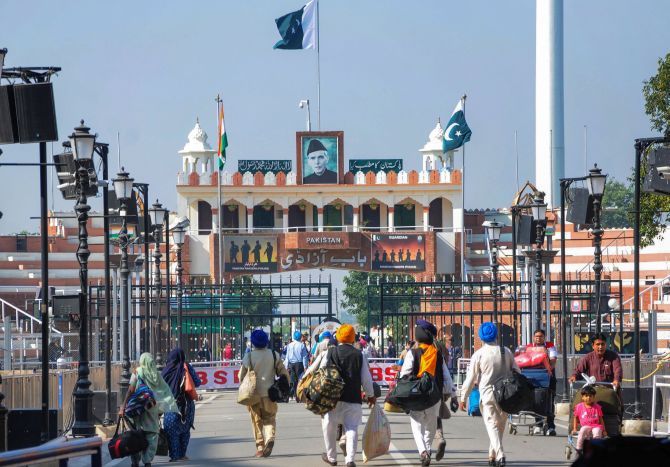 The Pakistan army was pushing for the Kartarpur corridor project with a strategic objective of promoting separatism in Punjab and Indian security forces will make no compromise if Islamabad tries to use it for ulterior motives, government sources said on Wednesday.

India conveyed its strong objections to Pakistan after a video released by it on the Kartarpur corridor featured a photo of three Khalistani separatist leaders, including Jarnail Singh Bhindranwale, they said.

The Kartarpur corridor is scheduled to be inaugurated on Saturday on both the Indian and Pakistani sides.

The corridor will link the Gurdwara Darbar Sahib in Pakistan's Narowal district to Dera Baba Nanak in Gurdaspur in Punjab.

India has asked Pakistan to provide top level security to the visiting dignitaries and conveyed to it that the threat of anti-India elements to the delegation has been a concern for it, the sources said.

They said Pakistan has not heeded to India's request to allow an advance team to assess the arrangements for the VVIPs, including for the former prime minister, which is a normal practice.

A team of officials from the Indian High Commission, however, was allowed to visit Kartarpur to see the arrangements, the sources said, adding that Pakistan has been told that no Khalistani groups should be allowed around the shrine or the corridor.

Pakistan is yet to respond to India's request. If there is a change, the Kartarpur agreement has to be amended, the sources said.

The Kartarpur corridor project survived the crisis in bilateral ties after the Pulwama attack as well as India's historic decisions on Kashmir as powers larger than the civilian government in Pakistan were pushing it for strategic objectives, they said.

India decided to go ahead with the Kartarpur project respecting the sentiments of the Sikh community and that it saw a real possibility of peace coming through the initiative, the sources said.

India's assessment is that the Kartarpur project was being implemented with alacrity and military zeal under the supervision of the Pakistan army as it has the strategic objective to use the corridor to encourage separatism in Punjab, they said.

The real purpose has been to promote separatism in Punjab and drive a wedge between the Sikhs and the Hindus, the sources said.

Asked whether Punjab MP Navjot Singh Sidhu's request to allow him to travel to Pakistan was cleared, the sources only said those who are part of the official delegation to visit the shrine on Saturday will not need political clearance.

Notwithstanding a chill in bilateral ties over Kashmir, Pakistan and India after tough negotiations signed a landmark agreement in October to operationalise the Kartarpur Corridor to allow Indian Sikh pilgrims to visit the holy Darbar Sahib in Pakistan.

Punjab Chief Minister Amarinder Singh on Wednesday lashed out at Islamabad over a video clip that featured Khalistani separatists, saying this showed Pakistan's hidden agenda in opening the Kartarpur corridor.

The clip also showed a poster of a banned pro-Khalistani group, Sikhs for Justice, which is pushing for Sikh Referendum 2020 as part of its separatist agenda.

Commenting on the video clip, Singh told reporters, "All this is what I have been saying from day one, that Pakistan has a hidden agenda here."

Later, in a strongly-worded statement, he warned against the 'agenda' of Pakistan's Inter-Services Intelligence behind Islamabad's decision to allow access to the Sikh shrine through the corridor across the border.

"Even though the corridor marked the realisation of the long-cherished dream of the entire Sikh community, including me, to pay respects at the historic shrine, India cannot afford to ignore the ISI threat that was attached to it," he said.

"This is what I have been cautioning against all along, they (the ISI) have a negative agenda behind it. We have to be very careful," he said.

The video, he said, only exposed the true intent of the ISI.

"On the one hand, they are seemingly showing us compassion and humanity, and on the other, they seem intent on using the corridor to woo the Indian Sikhs to promote the ISI-backed 2020 Khalistan Referendum and creating sleeper cells here," he added.

Three Sikh separatist leaders, including Jarnail Singh Bhindranwale and his military adviser Shabeg Singh, who were killed during the Operation Blue Star in 1984 feature in the video released by the Pakistan government.

The chief minister also attacked Shiromani Akali Dal leaders for allegedly playing into the hands of the ISI with their 'politically motivated comments' on the Kartarpur corridor issue.

He was reacting to SAD president Sukhbir Badal and former state minister Bikram Majithia comments accusing him of trying to sabotage the corridor by talking about an alleged ISI game plan.

"If there's anyone trying to sabotage the corridor, it is the ISI. But instead of targeting the ISI, they persistently attack me," he said.

"By choosing to ignore the ISI threat and trying to mislead the people of Punjab with provocative statements against their own government, these Akali leaders were actually taking forward the ISI agenda of dividing the Sikh community," he added.

"The ISI had been trying to divide the Sikh community to promote Referendum 2020, and the Akali leaders were actually helping their cause by giving such provocative statements," he alleged.

Source: PTI© Copyright 2021 PTI. All rights reserved. Republication or redistribution of PTI content, including by framing or similar means, is expressly prohibited without the prior written consent.
Related News: ISI, Pakistan, Kartarpur, India, Punjab
SHARE THIS STORY
Print this article 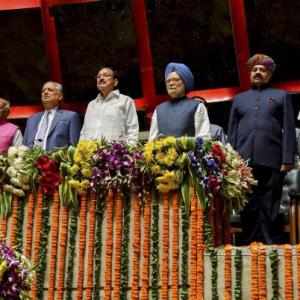 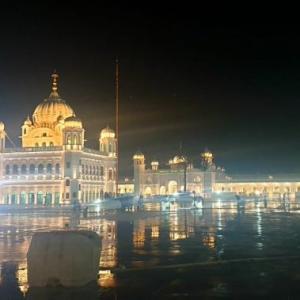