Can Rita Bahuguna succeed where her father failed?

Sudhir Bisht recalls the battle of 1984 in which UP strongman Hemvati Nandan Bahuguna was felled by Bollywood superstar Amitabh Bachchan. In 1984, a much-respected former chief minister of Uttar Pradesh was fighting the Lok Sabha election from Allahabad. His name was Hemvati Nandan Bahuguna, the surname meaning a person having many gunas (qualities).

True to surname, Bahuguna was a man of many qualities -- mostly good, but a few that earned him a rather unkind nickname, Natwarlal. I personally believe Bahugunaji was never a trickster, the chief quality of being a Natwarlal. But he changed his political colours often.

Here again, I feel the ability to change colours is not a quality to be ashamed of in politics. It has become a 'must-have' feature to thrive in public life.

Bahugunaji was born in Garhwal in Uttarakhand, but settled down in Allahabad from his student days. He cut his teeth in politics by organising the workers in industrial units in and around Allahabad into a formidable force under the banner of the Indian National Trade Union Congress.

His success as a leader with mass appeal across Uttar Pradesh caught the eye of the central leadership and in 1969 he was brought to the Centre as the minister of state for communication.

Bahuguna had mass followers among Muslims, Brahmins and scheduled castes and there was no particular community that was against him.

My own instinct tells me that after Indira Gandhi he had the largest following in the Hindi belt.

Bahuguna was dispatched to UP as the chief minister in November 1973 and this stint lasted just five months. He was sworn in again after the Congress party was voted back to power in UP in March 1974.

The second stint lasted 19 months and he was replaced by Narain Dutt Tiwari after a brief spell of President's rule. 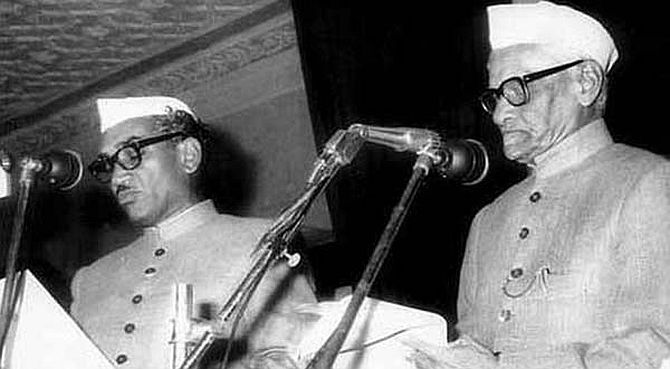 Why was he replaced if he was such an asset for the Congress party?

H N Bahuguna was a feisty kind of person who was very disciplined and yet not willing to play the role of a subservient lackey to the diktats of his leader Indira Gandhi.

When the Emergency was announced in June 1975, Bahuguna was the CM of UP and Indira Gandhi, then prime minister, asked him to take her son, the terribly unpopular Sanjay Gandhi, around the state.

Much to her chagrin, Bahuguna, the person whom she had handpicked to be CM of the biggest state of India, refused.

Bahugunaji was willing to bend before Indira Gandhi, but was not willing to bow before her young son. It is said his refusal caused him his position of chief minister and he was replaced by N D Tiwari, another Brahmin from the hills who had no such qualms.

Bahuguna left the Congress after the Emergency was lifted in 1977 and won the election from the Lucknow Lok Sabha constituency on a Bharatiya Lok Dal ticket. He was rewarded with plum ministerial assignments, but he rejoined the Congress after enjoying nearly 30 months in power under two prime ministers, Morarji Desai and Charan Singh.

With the collapse of the anti-Congress coalition in 1980, Bahugunaji returned to his old party. The ghar-wapsi was part of a larger plan of Indira Gandhi who wanted to return to power in the 1980 general election.

It is said Indira Gandhi sent Sanjay Gandhi to Bahugunaji's home. Sanjay touched his feet and addressed him as 'Mama,' maternal uncle. Soon, Bahuguna was back as the Congress MP from the Garhwal Lok Sabha seat.

I still wonder why the people of Garhwal voted Bahuguna to power. Perhaps it was due to the fact that there was no leader from present day Uttarakhand who had Bahugunaji stature in the 1980s.

And though Bahugunaji never pandered to the people of the Himalayan region, the people of Garhwal felt compelled to vote for their most famous son, albeit a son who was not too keen on an open exhibition of this relationship.

As a frontline leader of the Uttar Pradesh Congress from the 1950s till the late 1970s, Bahugunaji did virtually nothing special for Garhwal, his native place. Remember that Uttarakhand wasn't formed till then and Garhwal was then a part of UP.

He was also close to Charan Singh who allegedly once said that the UP hills produced nothing but potatoes! Charan Singh, an educated Jat leader, had hurt the sentiments of the people of Garhwal and Kumaon provinces by this statement. He conveniently forgot that the UP hills included the sacred Badrinath and Kedarnath dhams.

But when Hemvati Nandan Bahuguna decided to contest from Garhwal in 1980, he took on the avatar of Him Putr, the 'son of the snows' and the people of Garhwal voted him to victory.

Once Bahugunaji was back in his old party, he expected a ministerial berth, but had to remain content with the position of Congress general secretary. Not one to remain quiet, he started giving advice, unsolicited and unwelcome, to Indira Gandhi.

When Bahugunaji realised that he had become just an ornate piece of furniture in the drawing room of Congress Bhavan, he quit the party again and re-contested the Garhwal election as an Opposition candidate in 1981.

Indira Gandhi, the then PM, used all the resources at her command to ensure a heavy defeat for Bahugunaji. The by-election of 1981 was annulled by the chief election commissioner due to various complaints of poll violence and booth capturing lodged by both sides.

The by-election finally took place in 1981 and Bahugunaji romped home by a margin of 1.2 lakh votes.

In 1984, Bahugunaji returned to his old battlefield of eastern Uttar Pradesh and contested the election on a Lok Dal ticket. The Congress was still smarting under the humiliating defeat that he had inflicted upon the party in Garhwal.

Indira Gandhi had personally supervised the by-election of Garhwal and had asked all the big guns of her party to campaign against Bahugunaji, and yet he had won by a huge margin.

The 1984 general election for the Congress were fought under Rajiv Gandhi's leadership and Rajiv invited his childhood buddy, the iconic film star Amitabh Bachchan, to contest against Bahugunaji.

In 1984, I was in Allahabad and I remember that Bahugunaji was very rattled by this strange choice of candidate pitted against him. He was worried that the influential Kayastha community would vote for Amitabh Bachchan and so would the young people who worshipped the superstar.

He also feared that the Congress would brand him as someone who deserted eastern Uttar Pradesh and went to Garhwal for his survival.

He also feared that Amitabh Bachchan would be projected as the original Allahabad boy who studied at Boys High School and whose father taught English at the famous Allahabad University.

Bahugunaji's coterie of loyalists assured him that his stature was simply too big to be fearful of an actor who made his living dancing around the trees in cinemas.

And it was indeed true that Bahugunaji was like a giant Peepul tree in the garden of politics and Amitabh was just a tiny sapling.

The stalwart politician had all his bases covered nicely. Bahugunaji was one of the early members of the Congress party's unseen intellectual think-tank that introduced 'appeasement' politics in India.

The significant minority that constituted the Muslim community of Allahabad was firmly behind him and the influential Brahmin community held him close to its heart.

He was popular among the small traders, the rickshaw pullers, the tempo drivers, the lawyers, the doctors, the farmers, the clerks in the office of the AG's (auditor general) office, the huge population of serving and retired government servants who crowd the coffee house at the Civil Lines.

The oldies of Allahabad loved Bahugunaji as he was a part of the freedom fighter generation and was the young face of the non-cooperation movement against the British Raj.

The young, doughty fighter was jailed for three years and even though the British government offered to release him from jail when he suffered from tuberculosis, he refused to come out before the expiry of his jail term.

He was the quintessential Allahabad politician who was learned and rustic, principled in a flexible way and someone who had perfected the art of making voters remain grateful to him for being their representative.

So, a few days after Amitabh's candidacy was announced, H N Bahuguna started getting confident about his winning the seat. Sunil Sethi's report in India Today in the December 31, 1984, edition quotes Bahuguna as saying: 'If you've worked in a city for 40 years, your work is good enough to win this or any other election. I'm grateful to the Congress party for having provided free entertainment to my constituents.'

Within days of Amitabh Bachchan's campaign, it started to become clear that the lanky cine star would gobble up the political heavyweight.

My friend from Allahabad, who stayed very close to the Bahugunas's Hastings Road residence and had access to the household, tells me an interesting anecdote.

An election rally of Amitabh Bachchan was passing by the Hastings Road residence a week before voting date. By now, Bahugunaji has become jittery as he was told by an aide that the rally was the largest rally he had ever seen.

As the rally approached Bahugunaji's home, instructions were given to all the children of the house to stay put. No one was allowed to even peep outside the window.

As the noise from the rally gathered more and more strength, two lady members from the Bahuguna house ran out to have a dekko at the superstar.

My friend tells me that Bahugunaji threw a sofa cushion in disgust and said, 'If my own people are dying to see that man (referring to Amitabh), then how on the earth will I win!'

I presume that neither of the two women who ran out to see the cine star was Rita Bahuguna Joshi, Bahugunaji's daughter.

I am sure that Rita Bahuguna Joshi must be thinking about the 1984 election as she bids to succeed where his father failed. She is the BJP's candidate for the Lok Sabha election from Allahabad, a city where she once held the office of mayor.

Here's wishing good luck to the people of Allahabad. May they get the candidate who can nurture Allahabad as passionately as Bahugunaji did. 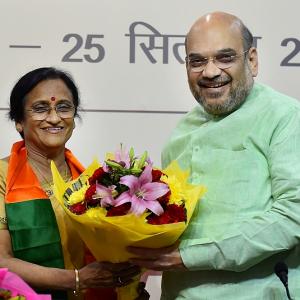