Not all change is good, but this one is, applauds Shekhar Gupta. 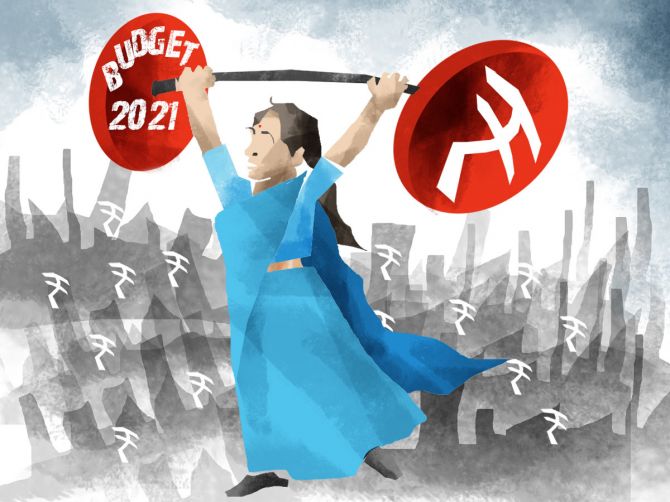 This Budget session of Parliament signals a new turn in our national politics.

After decades of fighting over personalities or rival ideologies built on religious and caste identities, India is stepping into an era of clear debate on economic policies.

We have seen this already, with Prime Minister Modi making an unabashed and unqualified pitch for the private sector, and Rahul Gandhi responding with not just the charge of crony capitalism, as in 'hum do, hamare do' but also reading in farm laws an anti-poor hijack of the poor farmer by the private sector. This is change.

And here's why we welcome it.

In military history, there are two kinds of warfare: Static, trench warfare and warfare of mobility.

We know which ended up being more decisive.

Indian politics, generally since 1947 but particularly since Indira Gandhi's hard Left-turn in 1969, has been unipolar economically.

First Nehru serendipitously got rid of the Right in his party and then his daughter carried out a full purge.

In the same period, using her brand of social-populism soaked in nationalism, she destroyed the one Opposition party of the libertarian Right, the Swatantra party.

Her most vocal rivals since were also various Socialists, Lohiaites and Communists.

She was so smart, and the Communist parties so torn between Moscow and Beijing, she split them as well.

The pro-Moscow CPI backed her fully, even over the Emergency.

There was little scope left for an ideological polarisation in India's political economy.

It was essentially a challenge of which side could be more socialist.

This pull became so irresistible even the Jana Sangh, and later BJP, walked into the same tent.

For five decades each side fired at the other from its own Socialist trenches.

Meanwhile, they all talked of reform. Reform with a human touch, inclusive reform, reform with Socialist flavour. Mostly reform by stealth.

Or, as the late Sitaram Kesri had said to me in an interview why he thought the Chinese Communists were like DTC bus drivers: "They signal left and turn right."

The sad fact is, we were not even turning.

We were moving straight, at a crawling pace, straddling multiple lanes, which is typical of driving with Indian characteristics.

If anything, he had put the clock back on even the post-1991 reform.

India's economy had stalled, as did its politics.

That's now changed. One side has declared itself to be an unabashed backer of private enterprise and the other Socialist.

Let's not be confused by whataboutery in terms of who's coming from where. Let's pick up the thread from this session.

First of all, the Budget talked of privatisation and not divestment.

I said on Budget day that it was the first time an Indian government had unapologetically used the word privatisation instead of divestment or some other euphemism.

For the record, Yashwant Sinha messaged me to say that he had also used the word in his 2001 Budget speech.

But still, it wasn't stated as a formal policy and used in that sense.

Second, the prime minister made the most forthright case for the private sector.

He said it needed respect and the days when calling entrepreneurs names got you votes are over.

He said if the whole world is gratefully buying Indian made vaccines, it is because of the private sector.

He also gave us a view on the public sector hitherto not spoken by anybody at top levels in power.

Why should IAS officers run businesses, he asked? If they are Indian, so are private entrepreneurs.

They also contribute to building the nation.

Don't diss wealth creators, he said. Because, if wealth is not created, what will you distribute?

Others followed in his wake.

Rising young BJP star Tejasvi Surya invoked the late Nani Palkhivala and quoted from one of his many famous speeches explaining why India was poor: 'Not by chance but choice, not by default but design, by embracing poverty as state policy and with a socialism that didn't transfer wealth from the rich to the poor, but from the honest rich to the dishonest rich.'

Heard this from India's treasury benches ever?

If this is the strongest defence of the wealth creators by an Indian prime minister, and that too in Parliament, Rahul Gandhi's short but weighty response also repositioned his party well to the left of the central verge where it had meandered for decades.

Rahul said the first farm law was to kill mandis as private buyers would now crowd them out, the second would enable the big private traders to hoard as much grain, fruit and vegetables as they wish with no stock limits, and monopoly of grain silos and the third would mean that an aggrieved farmer won't have any access to courts for justice.

The super-rich will control he supply and prices.

The poor farmer will be at their mercy.

Of course, it was all being done by Modi and Amit Shah (hum do) for their two favourite friends or hamare do (Ambani and Adani).

He didn't name them, but left nothing to chance.

Other key and most articulate Congress speakers in both houses stayed with this theme.

Former finance minister P Chidambaram said it was a Budget by the rich, of the rich, for the rich.

It was a Budget, he said, addressed to the one per cent of Indians who owned 73 per cent of national wealth.

Deepender Hooda then suggested what could be done with this one per cent.

Journalist Harish Damodaran in The Indian Express, he said, had written that a guaranteed MSP for all farmers will cost only a few lakhs of crores.

So why not impose a little tax on the super-rich whose wealth had increased by Rs 13 trillion in the pandemic year? That's all it will take.

Shashi Tharoor, the MP with by far the most liberal economic view in the Congress, didn't go that far, but said these laws threatened the very existence of farmers and that the budget was a case of 'na jawan, na kisan.'

MP after MP from the rival sides stayed with the same broad line.

We know that politicians can be counted upon to promise one thing and do the opposite.

But, tracking this debate, it is a reasonable conclusion that new ideological battle lines in Indian politics have been drawn.

And these are on economic terrain.

Not all change is good, but this one is.

In politics as in war, mobility and manoeuvre is better than sniping pointlessly from the presumed safety of trenches.

The farm laws have provided the first spark of sizeable opposition to the Modi government's economic policies.

It has grown into its biggest popular challenge yet.

Significant labour reform laws have also been passed at the same time.

Then, there is the promise of privatising major and showpiece companies but, most importantly, two PSU banks and a general insurer.

All of these have large, unionised work forces.

So, expect protests to begin any time now.

Of course, the Opposition would do its best to give it fuel and also use it as a political vehicle in the hope of returning to power. And why not.

This is how politics is always played in a democracy.

No one ever won power by being nice or fair to the other side.

What's new, today, is that for the first time in our politics there is a clear Right-Left divide on the economy.

Where I stand on political economy is well known, but it doesn't matter.

What matters is that henceforth people will go to vote with a clear choice between unabashed backers of private sector and freshly dyed-in-red socialists. 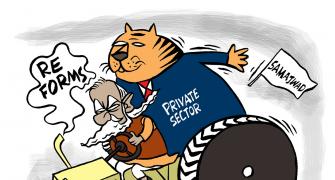 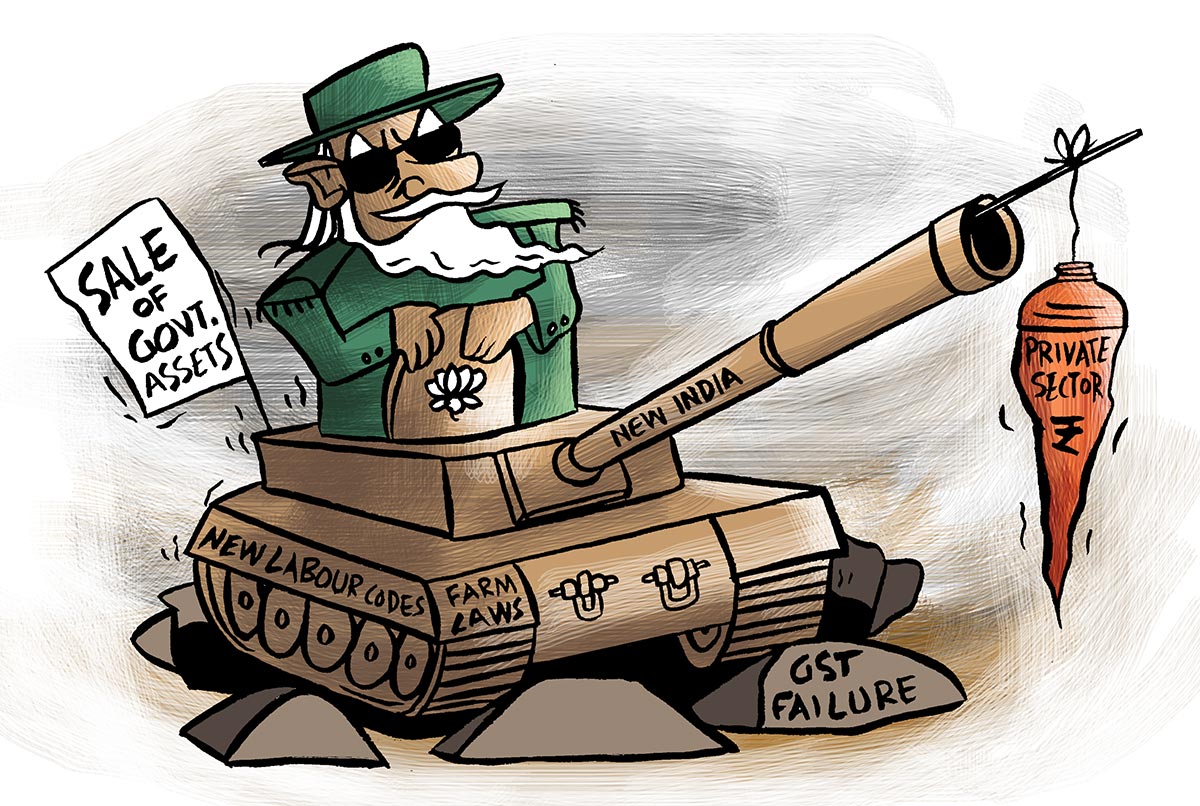