'Votes-for-notes no longer only means cash and goodies for fence-sitting voters,' points out Sunil Sethi. 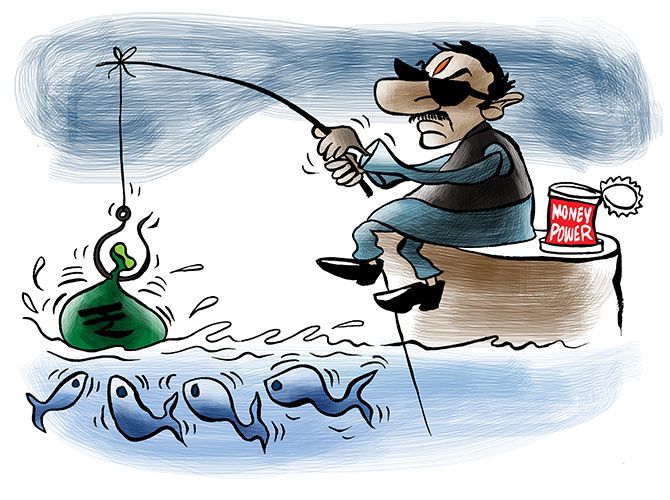 Money talks. By that definition campaign politics of the moment is brimming with bagfuls of cash.

In sylvan Arunachal Pradesh, the night before Narendra Damodardas Modi was to address a rally, in the car park of a government guest house, where Chief Minister Pema Khandu, his deputy chief minister, and the BJP president were staying the night, two vehicles in the CM's convoy were literally loaded up.

One, a government vehicle yielded Rs 80 lakh; the other a booty of Rs 1 crore.

Former MLA Ralom Borang told Election Commission officials where to get off. 'Part of this money is borrowed from my relatives and part of it is my own money.'

Chief Minister Khandu was the picture of Yes-Minister-opacity: 'At the moment the Election Commission and the income tax officials are monitoring the matter. I have asked the state party president to look into the matter,' he baldly stated.

This may be small change in a small state with two Lok Sabha seats, but, crucially, also facing an assembly election to 60 seats.

However, if further proof were needed it is now officially provided by the EC on a daily basis.

Only speculation exists as to the extent of cash sloshing around as the election juggernaut gains momentum.

Where does the money go?

Substantially larger sums are splurged on social media, amply confirmed by evidence of the eyes, in what is being dubbed as the country's most expensive election.

Then there are the rising costs of shoring up legislators's support, as in Karnataka and Goa recently; in the cut-throat 'trade' of seat distribution; or the apparently limitless supply of logistical backup by leading moneybags that includes cavalcades of cars, helicopters, and airplanes in return for future favours once government is formed.

"When political parties choose candidates on the basis of 'winnability', it also means money power. The number of crorepatis in Parliament and state legislatures is a clear indication of parties putting their faith in moneyed candidates to be able to win elections," says Chakshu Roy of the Delhi-based think-tank PRS Legislative Research on parliamentary practice.

Together with Jagdeep Chokkar, former professor at IIM-Ahmedabad and founding member of the Association of Democratic Reforms, these organisations offer comprehensive analysis on money power and criminalisation of electoral politics.

Votes-for-notes no longer only means blandishments of cash and goodies for fence-sitting voters.

In 2017 it was alleged that T T V Dinakaran, V K Sasikala's nephew, who later won the late Jayalalithaa's seat with a thumping majority and formed his own party, had offered huge bribes to EC officials to win rights to the AIADMK's two-leaf symbol.

The intermediary involved apparently confessed to the crime. Mr Dinakaran was let off in the court case but Chennai was rife with videos of cash-distribution -- a step up from gifts of kitchen blenders, television sets, and gold trinkets that the chief minister was famous for in her Lady Bountiful days.

In 1943, B R Ambedkar criticised his contemporaries Gandhi and Jinnah, saying, 'In establishing their supremacy they have taken the aid of 'big business' and money magnates. For the first time in our country, money is taking the field as an organised player.'

Several government reports since the 1990s, including the Law Commission and the Administrative Reforms Commission, have pondered on how to purge elections of dirty money or, as one of them politely put it, of reducing 'illegitimate and unnecessary funding'. All have abysmally failed.

Several of the EC's regulations on campaign financing are so credulity-stretching as to invite derision. Here are some choice examples:

"Let's face it," says Chakshu Roy, "the quest for political power begins with a lie. The minute a winning MP or MLA, having spent a fortune, declares to the electoral officer and the income tax that he has not exceeded the limit of Rs 20,000 you suspend disbelief. That is where our sense of apathy and disillusionment begins."

Charisma and oratory and mind-bending cross-country rallies, all have their uses in election campaigning. But cash is the undisputed king.