'Delhi voters have liked the politics of performance over noisy rhetoric and empty promises,' points out Vijaya Pushkarna. 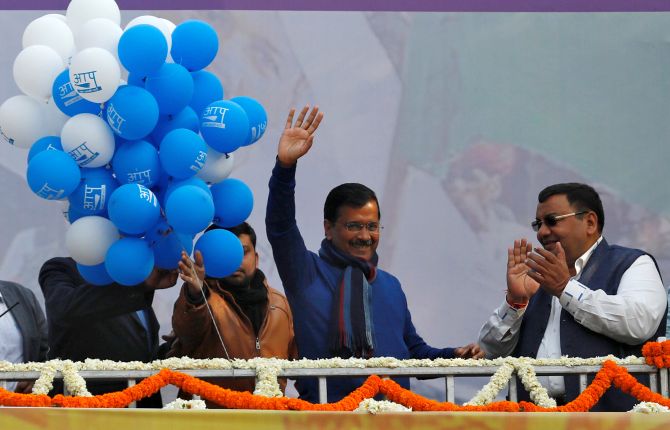 Arvind Kejriwal's growth will count among, if not as the most significant contributor to the Aam Aadmi party's spectacular victory in the Delhi assembly election.

Even if AAP had got a few seats and votes less than it garnered in 2015, he was pitted against the most venemous and divisive campaign any politician or party has faced in independent India -- including the time around the anti-Sikh riots, the demolition of the Babri Masjid.

Five years ago, Kejriwal had the blessings and the benefit of Kisan Baburao 'Anna' Hazare's movement against corruption.

This time, AAP had incumbency and were being judged on its performance, specifically, governance in the National Capital Territory.

Kejriwal has in a sense been like Narendra Damodardas Modi -- focussed.

Modi possibly has a ear only for his long time Gujju buddy Amit Anilchandra Shah whom he brought along to Delhi, first as BJP president, and later as India's home minister.

Kejriwal may listen to a few more people, but if AAP sources are to be believed, Manish Sisodia is to him what Shah is to Modi.

Thank God, Shah and Sisodia are as different as chalk and cheese.

The Delhi chief minister did not brand it the way Modi branded his Maan ki Baat, but his voice was a familiar and frequent one on FM channels every time a scheme was launched or altered.

He always came across as one of the citizens.

And there the similarity between Modi and Kejriwal seems to end.

For one, Kejriwal has not shown the desperation to win, by hook or crook.

And he has not shed his qualities of a gentleman.

He was very quick to realise Indians by and large value cultured -- sanskari --good behaviour.

One example is your conduct with your seniors.

Note how he has modified his references to Prime Minister Modi.

There is generally no mention of him in Kejriwal' s speeches, certainly no outburst against him.

At the height of the Delhi campaign, the chief minister silenced Pakistan's efforts to take advantage of the intensity of rallies in the capital, saying Modi was prime minister of India, his PM too and Delhi elections are an internal matter of India.

Kejriwal also ensured he did not get into the communal debate, the CAA, NRC etc despite the constant provocation.

Hark back to the times when the slightest provocation would have resulted in the 'Mufflerman' launching a protest.

This time, Delhi had the biggest protest underway in Shaheen Bagh, but Kejriwal distanced himself on the ground that law and order in the capital is under the home ministry.

In fact, he presented himself as the responsible eldest son doing his duty by his family: Ensuring good schools, medical facilities, safe bus rides for women, affordable and subsidised electricity and water for all, and even pilgrimage for the seniors.

And all of Delhi was his family.

Equally, Delhi voters have liked the politics of performance over noisy rhetoric and empty promises.

Last May, Modi bettered his party's Lok Sabha performance over that in 2014, while Kejriwal has dropped a few seats.

But it is worth remembering that the BJP in the summer of 2019 faced a fragmented Opposition whose members were squabbling, and a Congress that was, and continues to be in free fall.

Spicing them up were badminton star Saina Nehwal, wrestler Babita Phogat, a couple of others from the world of sports and films and, of course, a few kids of senior Congressmen! Kejriwal apart, AAP had Sisodia and Aatishi!!

At the end of the day, the people of Delhi have expressed themselves in favour of a secular democracy. Like...we the people of India.