News
Business
Movies
Sports
Cricket
Get Ahead
Money Tips
Shopping
Sign in  |  Create a Rediffmail account
Rediff.com  » News » 'Without winning another state, Kejri can't be a threat to Modi'

'Without winning another state, Kejri can't be a threat to Modi'

'AAP's next target will be Punjab.' 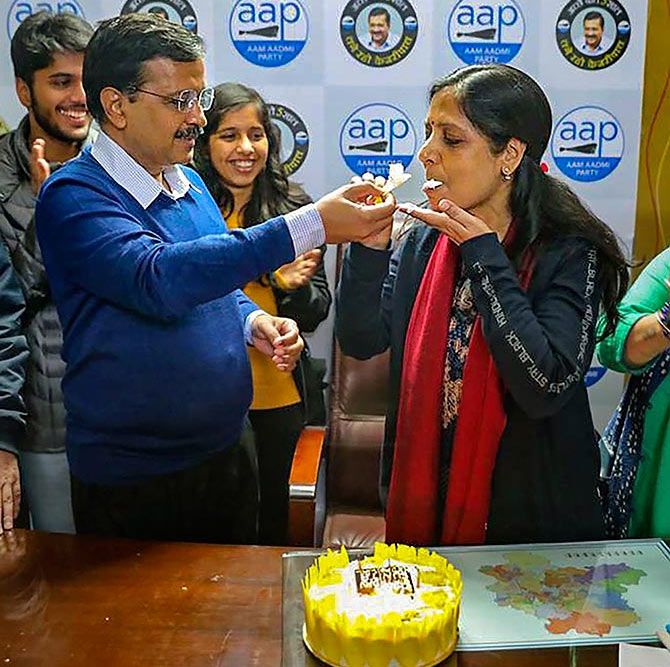 "Many voters who voted for AAP would still support the BJP's position on CAA-NRC, Ram Mandir and 370... People have voted for AAP because of welfare benefits and governance. They also think Arvind Kejriwal is a better leader in the state," Rahul Verma, fellow at the Centre of Policy Research whose research includes voting behaviour, party politics, political violence, and media, tells Rediff.com's Archana Masih.

Why did the BJP fail to storm Arvind Kejriwal's Delhi citadel?

The BJP was at a lower base in the Delhi assembly election. They were unable to mount the challenge posed by Arvind Kejriwal and the AAP.

There are clear patterns emerging from state polls in the last six months.

Opposition parties have an advantage when they have a local leader and when the BJP has no formidable CM candidate in its ranks. Maharashtra, Haryana, Jharkhand and now Delhi.

Even in the 2019 polls, opinion polls suggested a large chunk of Modi voters would vote for AAP in the state election.

When an Opposition party is the challenger they have to pinpoint the problems in the BJP's state government on its performance. When they are incumbent they have to perform reasonably well.

On that scorecard, the AAP government did fairly well in providing welfare benefits in health, education etc.

It built its campaign on local and state issues rather than making it into a national fight with Modi.

Kejriwal did not get into a fight with Modi and his personality, but also avoided contesting on the ideological plank.

In fact, none of the Opposition parties in the state are contesting the nationalistic pitch espoused by the BJP.

If you look at Haryana, Bhupinder Singh Hooda endorsed the revoking of Article 370 and did not oppose the Ram remple.

Similarly, Kejriwal did not oppose abrogation of 370 or the Ram remple.

He didn't visit Shaheen Bagh. He stayed away from these ideological traps.

Do you think AAP would have done better had the BJP not mounted a high-pitched campaign against Shaheen Bagh?

It seems so because the December-January opinion polls predicted a sweep for AAP and chances of the BJP going below its 35% vote share.

The high-pitched campaign made this contest between the BJP and AAP while the Congress collapsed.

Basically, both the BJP and AAP have retained their vote share, with the BJP increasing it a little.

The Congress was certain that this would be the picture in the Vidhan Sabha election.

In 2019, the Congress was seen as the national alternative -- that is why it came second in Delhi.

But at the state level it was largely a contest between AAP and the BJP. The Congress did not campaign, did not put the weight of the national leadership and has performed abysmally.

Prashant Kishor tweeted thanking Delhi for protecting India's soul -- does this mean that the election result is a rejection of the BJP's politics?

It would be an over-reading or misreading of the mandate. AAP's victory is largely because of its performance and no magic face in the BJP.

One cannot say this is a rejection of the CAA or NRC and the BJP's campaign plank because AAP did not contest on these issues.

They did not build a narrative on the CAA-NRC. A lot of voters who voted for AAP would still support the BJP's position on the NRC, Ram Mandir and 370.

People have voted for AAP because of the welfare benefits from the government. They also think Kejriwal is a better leader and the BJP does not have a clear alternative to offer in the state.

Does this boost AAP's national prospects and Kejriwal's ambitions outside Delhi?

It was an important election for AAP. If they had lost, they would have been in real trouble.

Given they have won by a handsome margin, their next target will be Punjab.

If they are able to give the Congress and Akali Dal a scare, then it will help create some realistic national ambition plan for them.

Anything before that would be overzealous or over joyous.

Delhi was a contest between Kejriwal and Amit Anilchandra Shah. Do the reasons for the BJP's defeat lie with Shah?

No. The BJP puts its heart and soul in every election. I don't know in which way Amit Shah can be held responsible for the defeat.

Even if Amit Shah wasn't there I don't think the BJP would have done better.

The high-pitched campaign brought them the vote share they have, otherwise it could have been worse.

Can Kejriwal be a challenger to Modi?

Without winning another state, I don't think that it is a realistic ambition.