China's presence in the international dog house is just the kind of opportunity that his opponents must be waiting for, predicts Colonel Anil A Athale (retd). 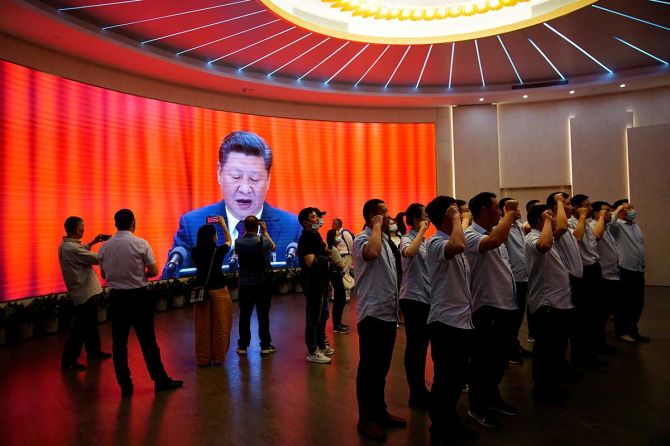 Most strategic analysts are in agreement with the idea that the COVID-19 pandemic has been a defining moment in world history and its likely impact on politico-economic balance of the world is likely to be as profound as the Second World War in the last century.

All countries of the world have suffered economic disruption leading to social and political impact.

The fear of pandemic has already led to making the world more insular.

Globalisation of the world economy, in works since the end of 20th century is increasingly being questioned.

Nations are re-visiting the global supply chain and 'interdependence', once a buzz word with positive connotation, has acquired a bad odour. The only exception to this rule seems China that has apparently weathered the Covid storm successfully and has (apparently) emerged stronger. Or has it?

Since April/May 2021, there has been intense international speculation about the origins of COVID-19 as to whether it was spread naturally from bats to humans or was it an accidental leak from a Chinese virology laboratory in Wuhan.

Many believe that it is important to know the truth in order to be able to deal with the current and future similar outbreaks.

One can easily rule out the wild conspiracy theory of it being a 'biological weapon' and part of deliberate Chinese action.

Biological weapons by definition are unusable due to its uncontrolled spread and have therefore never been seriously considered as a military weapon of choice. However, most countries fear its use by terrorists and therefore have programmes in place to deal with it.

The research in this area is characterised by methods to detect a bio-terror attack and ability to quickly isolate and contain affected area and manufacture antidote. It is more a defensive action rather than any serious attempt at launch of biological attack.

While it is indeed important to know the origins of the coronavirus, equally if not more important is the fact of Chinese secrecy post the detection of COVID-19.

It is true that Chinese scientists shared the genome sequence of the virus, there is still no clarity on whether China shared all the information it had on the coronavirus.

The reason for suspicion is the extraordinary speed with which China made a vaccine by October 2020, ahead of all other countries.

Another aspect of the same 'puzzle' is the fact that amongst all the countries of the world only China seems to have got the virus under total control.

In 2020, as the rest of the world was busy fighting the virus with their backs to the wall, China unleashed its 'Wolf Diplomats'.

China carried out aggressive moves in the South China Sea and picked up quarrels with Japan, Taiwan, the Philippines, Indonesia and massed its troops on the Ladakh border with India.

Chinese actions smacked of opportunism of the worst kind wherein it took advantage of world misery.

The nadir was reached recently when Chinese 'official' media mocked funeral pyres in India while China sent rockets to Mars! It is true that these posts were taken down subsequently, but by then damage was done.

As the G-7 group of industrial nations meet in the UK this week, the main item on the agenda would certainly be how to contain China.

It seems that someone in China seemed to be in hurry to proclaim China's arrival as a superpower on the world stage ahead of the 100th anniversary of the founding of the Chinese Communist party.

As the events unfold, it seems likely that the whole world other than Russia and some other minor countries are ready to present a united front against the Chinese.

US President Joe Biden ordering an intelligence probe against China to trace the origin of the coronavirus is just the tip of the iceberg.

In Asia, Chinese behaviour has forced India to shed its reticence and join the Quad grouping of US, Japan and Australia.

As time passes, the Chinese are likely to see a hardening of anti-China sentiment all over the world.

China's image has taken a severe beating, a fact acknowledged by Xi Jinping recently when he emphasised the need to project a 'soft' image of China.

This is like shutting the barn door after the horse has already bolted.

In a tightly controlled dictatorship like China, it is difficult to imagine that these actions took place without Xi's express sanction

If the world is to unite against China or even begin to lessen its economic ties, the consequences for China would be grave.

What is the likely way out for China from this dilemma?

The history of Communist regimes and the byzantine way the Communist party works in China (and earlier worked in the then Soviet Union) offers some clues.

Despite being Communist only in name (even Hitler's Nazis called themselves Socialists!) the Chinese Communist party still continues to use Marxist jargon and Communist rhetoric.

In that lexicon, three deadly sins have often been the cause of the downfall of leaders from Trotsky, Stalin (posthumously) and Khrushchev, in the Soviet Union.

In China, the downfall of Liu Shaoqi -- one of Mao Zedong's closest associates -- Lin Biao (once regarded as Mao's heir), the 'Gang of Four' (which included Mao's wife Chiang Ching) after Mao's death, Deng Xiaoping's fall and resurrection have all been justified on that basis.

Xi Jinping in recent years has committed all these 'sins'. Not since Mao has any Chinese leader put himself on such a pedestal as Xi has.

His book of Xi Thought is as zealously propagated as Mao's 'Red Book' was in the 1960s by the Red Guards.

Xi has also appointed himself chairman for life, overturning the Communist party's earlier policy of limiting the top position to two terms.

And finally, post the outbreak of COVID-19, Xi launched his 'Wolf warrior' diplomacy to antagonise almost all of China's neighbourhood.

If the G-7 gets its act together and the US resets its fraught ties with Russia, it will present an unprecedented danger to China's economic prosperity as well as its dreams of becoming a superpower.

In such a situation, sacrificing Xi Jinping and reversing his aggressive policies remain the only option for the Communist party.

Like any large organisation -- and the Communist party is indeed large, with over 91 million members -- the presence of factions is a given. It is human nature and China cannot be an exception.

By concentrating all power in himself and giving himself a life long position, it is certain that Xi has made many enemies.

China's presence in the international dog house is just the kind of opportunity that his opponents must be waiting for.

The only question is will the threat to Xi's position develop before or after the July 1, 2021 celebration of rhe Communist party's centenary. 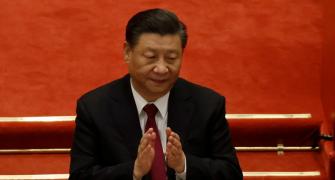 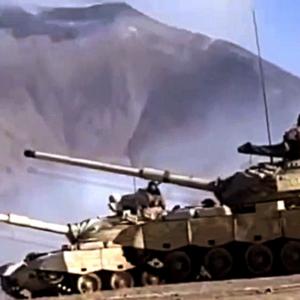