A year ago, on the night of June 15/16, 20 Indian soldiers, including a commanding officer of the rank of colonel, were killed by soldiers of the People's Liberation Army in the Galwan river valley in Eastern Ladakh.

The Indians were patrolling the Line of Actual Control to verify whether Chinese troops had returned to their side, in accordance with a disengagement agreement between military commanders from both sides.

Beijing later acknowledged the deaths of four Chinese soldiers in that incident, which was the first deadly clash on the LAC, involving the loss of lives, since 1975. This clash involved no firearms; troops were barbarically clubbed to death or thrown off cliffs into the Galwan river.

Until that confrontation, the Government of India had denied that any Chinese troops were in occupation of Indian claimed territory. But the deaths of 20 Indian soldiers starkly raised the question: 'Had they intruded into Chinese territory and were killed there? Or were the Chinese who killed them on the Indian side of the LAC?'

This incident was followed by a face-to-face winter deployment by both sides in Depsang, Galwan river, Hot Springs, Gogra, Pangong Tso and the Kailash range.

In February, senior military commanders agreed to a mutual disengagement and troop pullback in the Pangong and Kailash Range sectors. However PLA troops continue holding on to their gains in the other four sectors.

There are worrying strategic and tactical outcomes from this confrontation in Eastern Ladakh.

First, the Indian military has had to pivot to the north, switching its traditional emphasis from the Pakistan border to that with China.

In addition, India's Northern Command has deployed at least two mountain divisions to block the PLA's incursions into Ladakh, while another division has switched roles from Pakistan, to a new deployment against China on the Himachal and Uttarakhand borders.

This has left the army unbalanced -- stretched to the limit, with no further reserves at hand.

In effect, the PLA has forced the Indian Army into a year-round, militarised deployment in Ladakh, creating a second live border for India.

The two-front threat (China-Pakistan) that strategists have long regarded as a worst-case military scenario for India is now a reality.

Second, China-Pakistan military, political and economic linkages have been reinforced by the Eastern Ladakh confrontation and the common cause that Beijing and Islamabad perceive against India.

In 1965, 1971 and in Kargil in 1999, New Delhi felt free to take military action against Pakistan without serious worry about China interceding on its behalf. Now, however, India would have to factor in the likelihood of Chinese intervention on behalf of Pakistan.

Third, the PLA's intervention in Ladakh must be seen in the context of statements from Beijing criticising India's expansion of its road network. That means, before embarking on creating border roads or infrastructure, New Delhi will have to, hereafter, cater for China's negative reaction.

Fourth, India's increased border commitments on the LAC against the new reality of two powerful enemies acting in cahoots, will require a significant increase in defence spending at a time when healthcare spending on the pandemic is already stretching the Budget.

In case India's social development priorities do not allow for increased military spending, there will have to be a cutback in funding India's maritime ambitions in the Indo-Pacific, in order to direct increased funding to the Himalayan land border.

Fifth, even as New Delhi declined American assistance to deal with the Ladakh incursions, India's limited means force it to accept foreign military help to defend its borders.

Already, US transport aircraft, such as the C-130J Super Hercules and C-17 Globemaster III; and US Chinook CH-47F and Apache AH-64E helicopters played prominent roles in the Indian build-up. With drones from overseas now watching over the LAC, India's military reliance on foreign partners will inevitably expand.

Sixth, the Indian government's two-month long denial of the Chinese territorial incursions made it seem overly concerned about its image with domestic voters, even if that meant a tacit concurrence with China's argument that the PLA was on Chinese territory.

By getting the Indian Army to endorse that claim, the impression was created that the Indian Army works on political directives, with operational imperatives taking a lower precedence.

Seventh, notwithstanding New Delhi's bluster that it would curtail Beijing's investments and exports, Chinese companies such as Alibaba continue investing in India. Chinese exports to India were at record levels last year. The global message that went out was that New Delhi's bombast does not necessarily translate into hard action.

Eighth, all through the pandemic, and even through a crushing second wave, New Delhi -- unlike other major pandemic victims like the US -- did not send out even a single strong statement on biological warfare by State actors.

Ninth, New Delhi's reluctance to purposefully investigate cyber-attacks on critical infrastructure, such as the recent intrusions into Powergrid, National Stock Exchange and National Payments Corporation of India, encourages China to expand its cyber activities without hindrance.

Leading into the summer campaigning season in Ladakh, China is keeping India engaged in border talks, even as it remains in firm control of an estimated 600-800 square kilometres of Indian territory, depending upon how it is calculated.

China first tested this 'forked tongue' strategy in 2017 in Doklam, Sikkim. It is now being implemented in Ladakh. 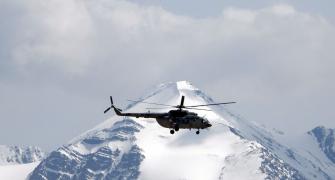 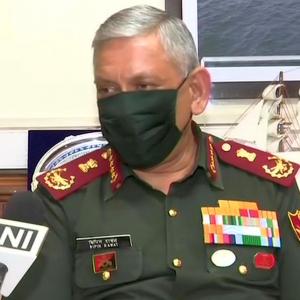 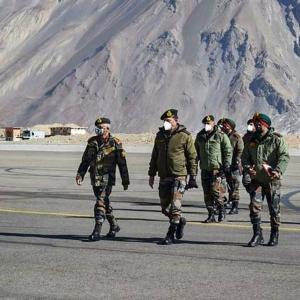