Advani, the lion in winter

These are not happy times for Mr L K Advani. Colleagues in the Bharatiya Janata Party who were in total awe of him and owe their rise in the party as well as in national politics to his unstinted support have turned bitter critics.

Fawning journalists who would call Mr Advani's office incessantly for an 'exclusive' interview or felt privileged to be invited for a cup of tea with him are now busy writing his political obituary or ridiculing him pitilessly.

The Delhi commentariat, which has arrogated to itself the task of thinking for the masses, would want us to believe that five decades of public life can be summed up in 33 minutes and 47 seconds of discussion as was witnessed last week on a 24x7 news channel.

On a rain-soaked morning last Tuesday I met Mr Advani at his residence. He looked his usual affable self, warm and effusive as ever. But his eyes reflected a sense of pain and anguish.

For a while we talked about books and authors. Mr Advani is a voracious reader although, unlike some of his critics, he does not flaunt intellectual pretensions. The conversation meandered to the past fortnight's turmoil in the BJP and suddenly there was a tinge of hurt in his voice. "This is not the party I knew... it has changed so much," he said wistfully.

It has indeed changed in many ways. Thirteen years ago, when Mr Advani was party president, the BJP projected itself as an alternative to the Congress not merely in terms of political ideology but also policy and programme.

Few people would know about it, and fewer in today's BJP would care to recall, that he and Mr Atal Bihari Vajpayee were constantly thinking in terms of new ideas to craft an alternative agenda of governance in keeping with the aspirations of the times.

Mr Vajpayee was the 'big picture' man -- "We need to change the system, otherwise governance cannot change" -- while Mr Advani would think in terms of nuts and bolts, the small details, of how to actually go about changing the system.

I had accompanied Mr Advani on a long tour through Marathwada during the 1995 Maharashtra assembly election campaign. Those days there were no Learjets at his disposal. We travelled by train every night and by car during the day, stopping at the homes of party workers for lunch and dinner.

One night after boarding the 'Second Class AC' compartment of a train he began talking about the need to start preparing for the 1996 general election.

"We should have a complete agenda of governance before the election is announced," he said, and then went on to list some key areas where the BJP could come up with new ideas.

Today many (though not all) of those who aspire to take charge of the party have neither the time nor the inclination to indulge in ideational thinking. Rhetoric has come to replace crafting of agenda. Any serious effort to engage them in discussing alternative policy ideas invariably fails because they find it boring.

For some it's easier to outsource that task to lobbies and pressure groups: They come up with 'alternative policies' and these are then peddled as possible party objectives. Others think it's a waste of time as ultimately intellectual engagement in framing policy

or fleshing out ideas does not add up to votes.

This is the age of television studio one-liners that do not require lateral thinking.

But the ability to think, the effort that went into drafting over a period of time an agenda -- ranging from economics to foreign affairs, agriculture to security -- for the BJP which was truly an alternative to that of the Congress, of painstakingly preparing the party for power, is not the only thing that sets the Vajpayee-Advani era apart from what we see today.

It's also the moral authority which Mr Vajpayee and Mr Advani wielded. Mr Vajpayee rarely spoke, but when he did it was the final word. Mr Advani didn't need to speak. His body language spoke for him.

Soon after the bogus reconciliation of warring factions of the BJP in Gujarat (one led by Mr Shankersinh Vaghela and the other by Mr Keshubhai Patel) the party's national executive met outside Delhi.

During the mid-morning tea break, Mr Vaghela decided to make a public show of his repentance. Mr Advani was standing in a corner, talking to some of the national executive members, with a cup of tea in his hand. Mr Vaghela walked up to him and tried to touch his feet.

With amazing alacrity, Mr Advani stepped aside, turned around, and walked out of the room without even uttering a word.

The message was loud and clear for all who were present: To forget is not to forgive; once you violated party discipline, you remained an outcaste forever. Mr Vaghela has since found solace in the Congress.

Times change, people change. Each one of us has a fatal flaw. Mr Advani's fatal flaw, to my mind and reaffirmed after my recent chat with him, is that he could never assert himself forcefully and aggressively, rudely over-ruling others.

His 'tough man' image helped him avoid acrimonious discussion on contentious issues, but if push came to shove, he would let Mr Vajpayee take the call. Age and circumstances have softened that image; black and white have turned into shades of sepia; and, Mr Vajpayee is no longer a participant in the decision-making process.

It's not surprising that Mr Advani should now be seen, more than ever before, failing to assert himself, of doing what his instinct tells him is the right thing to do. He admitted as much during our chat.

Yet, I have also seen Mr Advani act with steely determination, brushing aside objections hesitantly offered by his colleagues. People have forgotten about May 1996 when the BJP emerged as the largest party in that year's general election.

If memory serves me right, on May 13 Mr Advani convened a meeting of senior leaders in his office at the party headquarters and insisted that the BJP should stake its claim to form the government. Not everybody was in agreement because the chances of cobbling together a majority were dim.

Mr Vajpayee himself wasn't too sure, but for a change it was Mr Advani who took the call. The then President, Shankar Dayal Sharma, accepted the BJP's claim and Mr Vajpayee was sworn in as prime minister on May 16. That government lasted for only 13 days; the rest is history.

Mr Advani was confident that the BJP would be asked to form the government and had come for the May 13 meeting with a piece of paper on which he had scribbled the names of the ministers who would take the oath of office along with Mr Vajpayee. It was a short list and included Mr Jaswant Singh as finance minister.

Kanchan Gupta is Associate Editor of The Pioneer newspaper. He has served in the Prime Minister's Office during the Atal Bihari Vajpayee government. 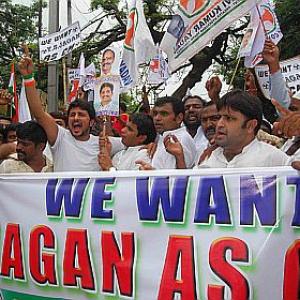