A rally for war criminals: Why are TMC, Left silent?

A belligerent rally in Kolkata by 16 Islamic organisations in support of Delwar Hossain Sayeedi, one of the prime accused in the 1971 genocide in Bangladesh, is indicative of West Bengal’s liberal space shrinking, says Dr Anirban Ganguly.

Something unprecedented happened on March 30 in Kolkata. Sixteen Islamic organisations came together at the Maidan, the second largest public ground in the city, in protest against the ongoing war crimes trial in Bangladesh, against the Shahbag sit-in and in support of the vice-president of the Jamaat-e-Islami Bangladesh, Delwar Hossain Sayeedi, one of the prime accused in the 1971 genocide in Bangladesh.

It was astounding to see a huge and belligerent crowd gather from all over the state to support one of the best known razakars and collaborators with the Pakistan Army in its genocide against Muslims and Hindus in East Pakistan.

Speakers addressing the gathering attempted to whip up hysterical support for the Jamaat and its leaders and pledged that just as West Bengal’s Muslims prevented Salman Rushdie from the entering the state and hounded out Taslima Nasreen in 2007 they would generate a movement against the pro-war crime trial bloggers in Bangladesh and would take on their supporters with the same zeal. They even threatened to block any future visit of Bangladesh Prime Minister Sheikh Hasina to India.

But most shocking was their brazen support for Sayeedi, a known vocal anti-India preacher, a rabid anti-Hindu who has been active in organising pogroms against minorities in Bangladesh over the years and one of the most avid collaborators in Pakistan’s genocide against fellow Muslims.

They openly declared their support for Sayeedi saying that a death sentence for Sayeedi in effect meant a death sentence for the Koran and Islam. These speakers chose to ignore the fact that Sayeedi was being tried for killing in cold blood their fellow religionists. It was for the first time that such a mobilisation took place in Kolkata and it simply reinforced an emerging mindset which has begun trying to consolidate a pan-Bengal Islamic identity.

Incidentally, it was from the Maidan in August 1946 that the call for ‘direct action’ was given by the Muslim League. The result of that call on the history of both parts of Bengal is too well known to even require a passing reiteration. But our politicians have deliberately chosen to ignore that past.

Not a single political party, and in them especially those who at the first opportunity, jump to dissect delusional dimensions of Hindu fascism and habitually get into describing various conjured Hindutva theatres of genocidal experiments or pontificate on the need to maintain the secular and syncretic texture of our nationhood, came forward to condemn the positions taken in the meeting.

Not one political party even recalled that Sayeedi and his ilk were part of those criminal groups which selectively hunted out and massacred Hindus, fellow Bengali Muslims and helped to sustain Pakistani resistance to Indian soldiers. The Shahbag protesters have been calling for the establishment of a truly secular and constitutional Bangladesh where religious bigots would be reined in and their anti-national tendencies curbed and yet they find no support from our political secularists.

Both the Left Front and the Trinamool Congress have maintained a studied silence having mortgaged over the years their politics to Islamic fundamentalist elements in the state. Comrades who jump at every opportunity to display their secular credentials in order to keep communal forces at bay through organising rallies, sit-ins, and seminars have not issued even as much as a statement.

In fact Sayeedi himself had a very clear benchmark for Communists, “Leftists are not Muslims. They don’t believe in prayers,” he had declared. It has always been an axiomatic truth for him that no non-Muslim could be allowed to live in Bangladesh. He assiduously worked for it ever since the War of Liberation in 1971. No wonder comrades in Bangladesh find it difficult to survive on their own and have prudently sided with Sheikh Hasina.

The Congress believing that it shall gain space with the electorates’ gradual disillusionment with the TMC has obviously kept quiet. Its studied silence is part of its larger grand design of mobilising country wide minority support. Nor has the Indian media come forward to debate the phenomenon; it is still incapable of visualizing its status once congregations such as these begin  spawning Sayeedi clones all over India.

For the media and journalists Sayeedi had a simple equation, “Journalists write lies. They are the enemies of Islam”. It is well documented as to what Sayeedi did to those whom he considered as enemies of Islam. It is this stoic silence in face of a rising vocal Islamic fundamentalism which is worrisome and condemnable. The liberal space in Bengal is fast shrinking and we have paid a heavy price for such a constriction in the past.

Those in whose support the Maidan congregation was organised were at their vicious best when it came to treating minorities in their own country. Sayeedi himself, as head of the local Al Badr and Al Shams, has been convicted of killing Hindus, burning their homes and businesses and of forceful conversion. He assisted the Pakistan army in its operation of decimating Hindus.

Sydney Schanberg, then correspondent of the New York Times, noted this selective approach, ‘the [Pakistani] army is now concentrating on Hindus, the killing is more selective, [and] has not stopped.’ Schanberg further recorded how the Pakistan army had ‘painted big yellow H’s on the Hindu shops to identify the property of the minority, eighth of the population that it has made it special targets.’

Archer Blood, the ‘dissenting diplomat’, then American Consul General in Dhaka cabled on March 29, 1971 on how the ‘Hindus [were] particular focus of [the] campaign and how the army was ‘going after Hindus with a vengeance.’

Veteran Pakistani journalist Anthony Mascarenhas, who fled to London in order to tell the truth about the Pakistan army wrote in exasperation in his columns in the Sunday Times that the Pakistani military operation had two distinctive features: ‘ One, the cleansing process’, the other ‘rehabilitation effort’ -- ‘turning East Bengal into a ‘docile colony of West Pakistan.’ Sayeedi and his political colleagues had wholeheartedly facilitated all of these; the Maidan congregators were silent on that.

It was Sayeedi who had once said of the Hindus of Bangladesh, ‘Why should we feel sad when the Hindu brothers choose to leave our country? Do we mourn when we have indigestion and materials leave our bodies?’

Do we then assume that those in West Bengal who have organised the Maidan rally in Sayeedi’s support and those who have, through their silence given consent to their demands, really support that line? 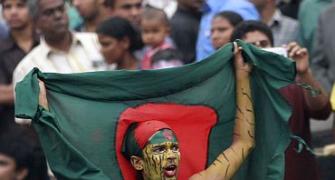 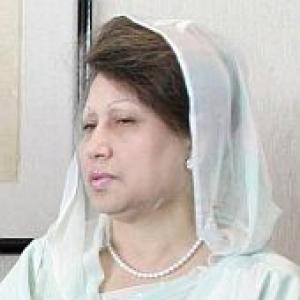 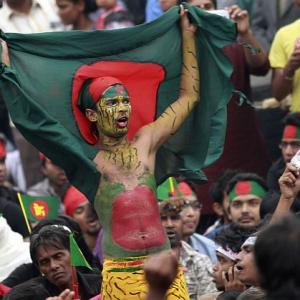