'All the Congress MLAs support Scindiaji and whenever he signals, they will jump ship.' 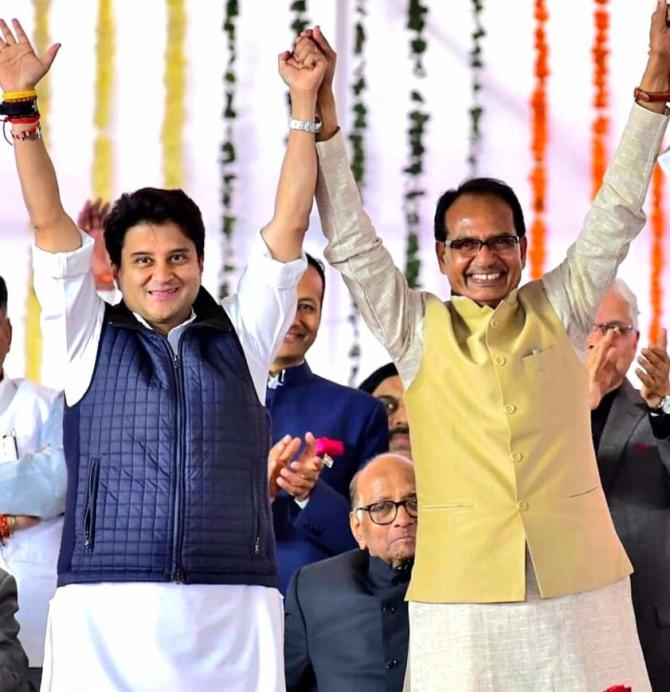 Senior Congress leader Digvijaya Singh had blamed Rampal Singh along with BJP leader Dr Narottam Mishra and Chouhan of engineering a split in the Congress.

"He (Kamal Nath, the Congress chief minister) should not stay as CM even for a minute," says Rampal Singh.

There are reports about infighting between supporters of Dr Narottam Mishra and Shivraj Singh Chouhan about who should be the next chief minister if the BJP forms the government...

This is baseless news. We (BJP MLAs) have always been united and shall remain united in Madhya Pradesh. The Congress is deliberately spreading such rumours.

We are staunch party loyalists and believe in the party's ideology. Soon, everybody will come to know that these are just baseless rumours being spread to divert the attention of the people from how untenable the Kamal Nath government has become.

Dr Mishra and all the BJP MLAs were at the airport to receive Scindiaji. There is no rift at all.

Are all the Congress MLAs, who have apparently resigned, still with the BJP? There are reports that some of these 20-odd Congress MLAs are planning 'ghar wapsi'?

What more do you want when these 22-23 MLAs have resigned as legislators?

If you were in Bhopal this (March 12) evening, you would see most of them with Jyotiraditya Scindiaji joining him in the huge roadshow that the BJP has organised.

Once we form the government you will see more (Congress) MLAs joining the BJP.

How are you sure that Kamal Nath government will go?

Isn't that so evident now? What is remaining (of his government now) now?

When so many Congress MLAs have resigned and will be joining the BJP soon, how can his government survive?

Bilkul (Absolutely). Understand one thing (that only Shivraj Singh Chouhan can become the state's next CM) clearly.

As for the rest of us, we are loyal soldiers of the BJP and whatever role the party assigns to us we will fulfill our duties sincerely. The party's top leadership will decide about that and we will go with the party's decision.

How soon do you think will the BJP form the next government?

Very soon. Looking at the situation, he should resign as Madhya Pradesh chief minister on the grounds of morality and ethics. He (Kamal Nath) should not stay as CM even for a minute.

The party's top leadership will take a decision soon (The BJP has called for a floor test in the MP assembly on March 16).

The picture is so clear now that this (the whole process of a floor test and the subsequent BJP claim staking to form the next government) should not take too long.

The original Congress has joined the BJP now.

The Congress fought the Madhya Pradesh assembly election with Scindiaji's face and now that he is with the BJP, expect a flood (of Congress MLAs joining the BJP) soon to the BJP.

All the Congress MLAs support Scindiaji and whenever he signals, they will jump ship.

No compromise on territorial integrity: India to China