With Mindy Kaling producing as well as writing parts of Never Have I Ever, Indian-American characters are telling their own story instead of having it told for them.
Indira Kannan reports. 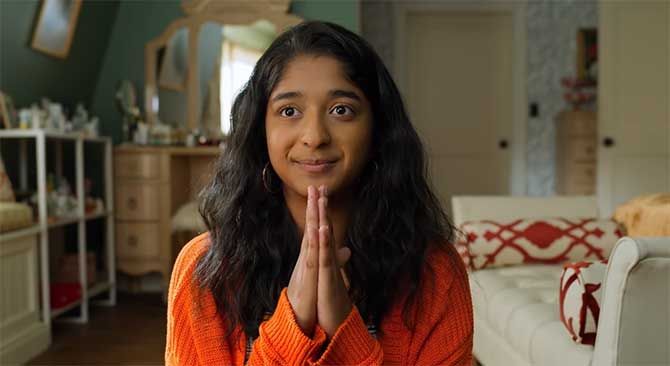 Indian-American actress, writer, and producer Mindy Kaling's much-awaited series titled Never Have I Ever premieres on Netflix on April 27.

The show is a funny, feel-good look at the life of a desi high school student in sunny southern California, based loosely on Kaling's own experiences.

Devi Vishwakumar is a high-achieving, hot-tempered high-schooler juggling academic pressure, her tough-love mom, her cultural identity within the American society and of course, a teenager's all-consuming problem of getting a date with a hot guy.

She dreams of getting into Princeton and going out with Paxton.

Playing Devi is the fresh-faced Maitreyi Ramakrishnan, the Tamil-Canadian teenager who was chosen from among 15,000 aspirants last year after answering a social media casting call.

She was still in high school at the time, and had to Google how to put together an audition tape.

She was 17 while filming, the only minor on set, and had to be accompanied by a parent during the whole shoot in Los Angeles.

In an interview, Maitreyi sounded thrilled to have worked with Kaling on her first acting job.

"On my first day of filming, I asked my co-star Ramona Young what certain words meant...but the kind of environment that Mindy creates between the crew and the cast is so welcoming, you don't feel intimidated even if you don't know, you're free to ask questions and you're free to try," Maitreyi says, adding, "It's amazing for me to be able to say that she's my mentor and I can ask her for help." 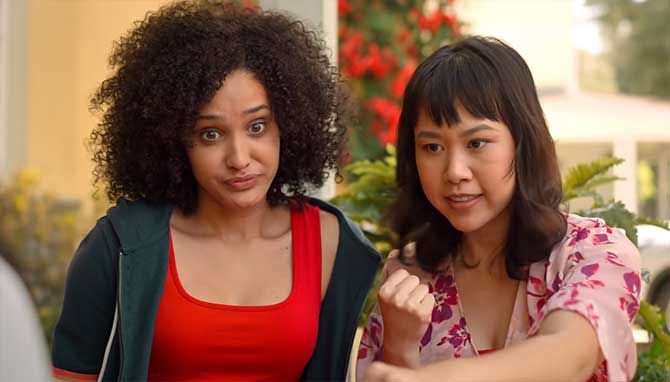 IMAGE: Lee Rodriguez as Fabiola and Ramona Young as Eleanor.

Devi's world is a microcosm of multicultural America -- her best friends at school are Eleanor, who's of Chinese descent, and the biracial Fabiola.

She has one because she's still coming to terms with the sudden death of her father.

Devi's mother Nalini, played by Delhi Belly actress Poorna Jagannathan, is somewhat of a Tiger Mother, a dermatologist who often gets under the skin of her daughter with her strict rules and high expectations.

She's a little more lenient with the seemingly conformist Kamala, Devi's beautiful cousin who's staying with them as she works on her PhD, adding to Devi's resentments at home.

With all that's weighing on her, Devi is not always there, either for her family or her friends, as she tries to deal with the loss of her father who's no longer there for her.

It's a demanding sitcom role, and newcomer Maitreyi pulls off the right mix of emotions, drama and comic timing.

"I completely identified with Devi in a lot of aspects like she's very smart and she's always on top of her game at school and that was definitely me in high school," she says.

"Also finding where you lie within your culture, me and Devi have that shared experien

Now I can comfortably say I am a Tamil Canadian without a doubt."

"But when I was Devi's age, I still had that struggle of figuring that out," Maitreyi says. 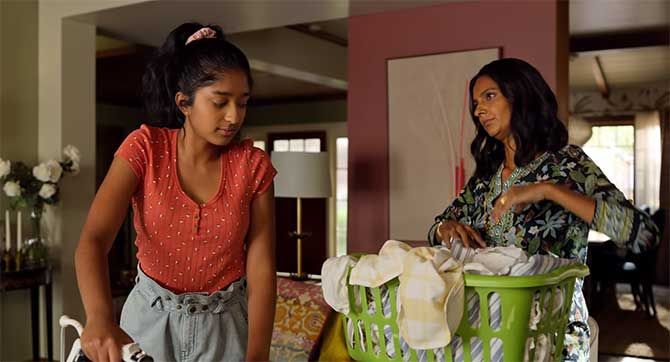 Never Have I Ever drops at a time when America's ethnic communities are coming into their own in the field of entertainment.

The 2018 films Crazy Rich Asians and To All The Boys I've Loved Before featured lead characters who were Chinese and part-Korean.

With Kaling producing as well as writing parts of Never Have I Ever, Indian-American characters are telling their own story instead of having it told for them.

Some of the stereotypes are still here -- Devi is an academic wiz, her mother wants to drive a 'moderately-priced sedan', and her cousin has to entertain proposals for an arranged marriage.

But the twist is that none of them is defensive about their choices: Far from hiding her academic smarts, Devi rattles off her resume to an admissions coach, convinced that she ought to get into Princeton.

"She never dumbs herself down for anybody," notes Maitreyi.

Kaling also mines the community for laughs with a critical eye, as during a Ganesh Puja.

"That episode was written by Mindy -- if you don't have that background and that cultural context, you're not going to be able to write it authentically," says Maitreyi.

The freshly-minted actress is now back in the Toronto suburb of Mississauga, homebound due to the COVID-19 lockdown, awaiting her show's release, reading scripts and compiling a self tape.

"I'm hoping for Season 2, that would be awesome," Maitreyi says. 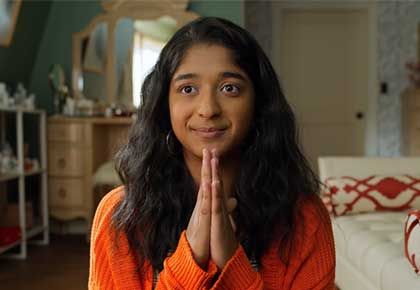 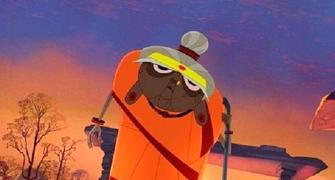 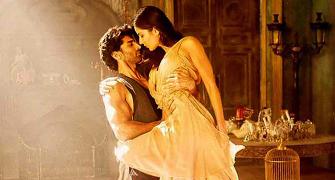 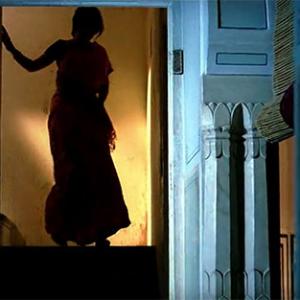 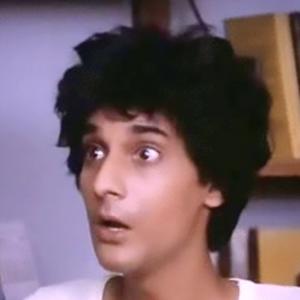