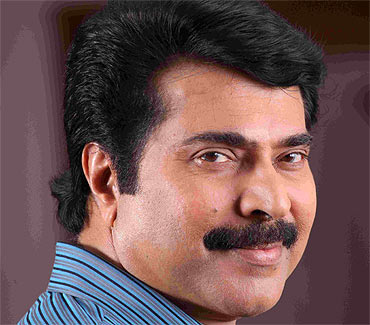 Now, the team is coming together in a sequel to both the films, which is titled The King & The Commissioner. 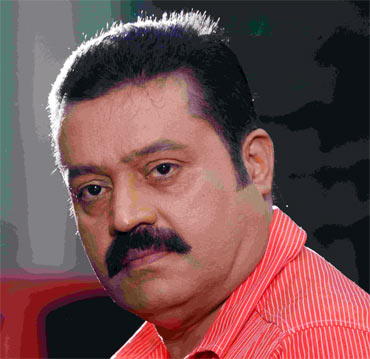 The shooting of the film, produced by Anto Joseph, is currently underway in Kochi. "When the two iconic characters of Malayalam cinema come together, there will be a lot of expectations from the audience. We are keeping that in mind and this one will be a thriller for sure," says Shaji Kailas.

The story is located in New Delhi, where Joseph Alex IAS and Bharat Chandran IPS are working. The two come together to investigate a crime and that is when the excitement begins.

With the two super stars Mammootty and Suresh Gopi reportedly not on speaking terms with each other until recently, there was speculation about whether the project would ever take off. But whatever issues they had have been resolved and they are now friends again. 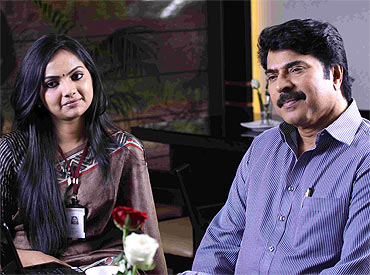 Image: A still from King and Commissioner

Shaji and Renji started their association with the comedy Dr Pasupathy and went on to churn out blockbusters one after the other such as Thalasthanam, Sthalathe Pradhana Payyans, Mafia, Ekalavyan, Commissioner and The King.

Renji Panicker also directed a sequel to Commissioner, titled Bharat Chandran IPS, which was a super hit as well. Renji's scripts are known for fiery dialogues and spectacular action.

Shaji Kailas is regarded as the finest action film director in Malayalam cinema.

The dialogues from both the earlier films are still popular with people of all age groups. Like Commissioner Bharat Chandran yelling, "Just remember that " or Joseph Alex talking about "sense, sensibility and sensitivity".

The King & The Commissioner has acclaimed theatre and film actor Dr Mohan Agashe playing the guest role of a Prime Minister. Also in the cast are Samvrutha Sunil, Janardhanan, Sai Kumar, Sanjana, Devan, Ganeshkumar, Nedumudi Venu, Vijayaraghavan and Jagathy Sreekumar among others.

Bharani K Dharan is the cinematographer. The music has been composed by Rajamani whose background score for both the earlier films had thrilled viewers.

There is tremendous excitement as the two heroes come together once again, but it remains to be seen if they can recreate the old magic in The King & The Commissioner.