Sign in  |  Create a Rediffmail account
Rediff.com  » Movies » 'Saif and I are fans of the original Agent Vinod'

'Saif and I are fans of the original Agent Vinod' 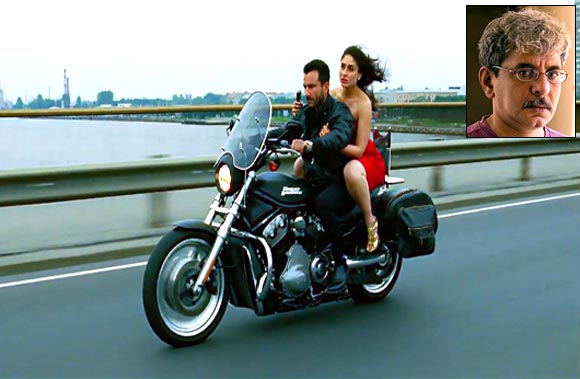 Image: Saif Ali Khan and Kareena in Agent Vinod, inset Sriram Raghvan
Patcy N in Mumbai
After making films like Ek Hasina Thi and Johnny Gaddar, director Sriram Raghavan returns with the ambitious Agent Vinod, starring Saif Ali Khan and Kareena Kapoor.
The film was in the making for two-and-a-half years and Sriram is really excited about its release this week finally, and claims the wait is well worth it.
In an e-mail interview with Patcy N, Sriram talks about his fascination for thrillers and how Agent Vinod came about.
You seem to have a fascination for thrillers -- Ek Hasina Thi, Johnny Gaddar and, now, Agent Vinod.
I love all kinds of films but perhaps I am a little partial to thrillers. And there are so many sub genres within: Ek Hasina Thi is a revenge drama, Johnny Gaddar, a caper and Agent Vinod is a spy thriller.
What was it about the concept of Agent Vinod that appealed to you? How did you flesh out the story?
I just love the spy genre -- James Bond, Jason Bourne, Jack Ryan, Jack Bauer and of course Hitchcock's films like Notorious, North by Northwest and so on. I don't know why, but there has not been a spy film in Hindi cinema for a very long time.
I've grown up watching films like Aankhen (Dharmendra) Farz (Jeetendra, Babita), Shatranj, Humsaya, The Great Gambler, Suraksha and so on. Some of them were cheesy but I thoroughly enjoyed them.
Both Saif and I are fans of the original Agent Vinod. So we thought let's borrow the title and make up a fresh story that's set in contemporary times.
Since your story is different from the earlier Agent Vinod, didn't you consider giving it a different name?
Not for a moment. We love the title Agent Vinod. I was really happy that the Rajshris gave it to us.
Why has it taken two-and-a-half years to make this film?
It was an ambitious script, set in various countries. We have almost as many locations as we have scenes in the film. We shot in countries like Morocco and Riga where Indian films have not gone so far. Also, action takes longer to shoot.
Maybe we should have spent a year in pre-production and then shot it at one go, but we were excited and just plunged in. I hope the end result justifies the wait.
Tags: Agent Vinod , Sriram Raghavan , Johnny Gaddar , Hasina Thi , Saif Ali Khan

'Saif is an encyclopaedia on Bond films' 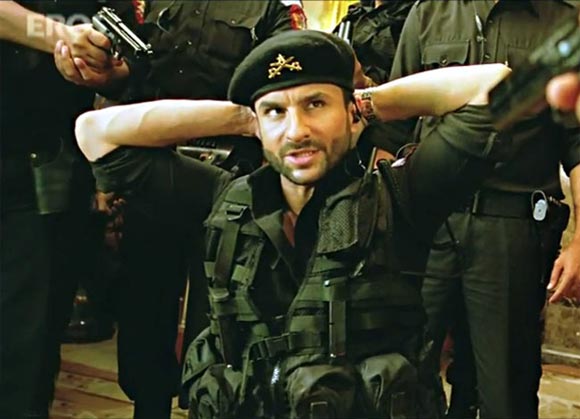 How did you select the various locations for the shoot?
I love travelling though I had not travelled much before this movie. Our story was such that we could make a wish list of locations and set our scenes in them. My co-writer Arijit Biswas and I did a lot of armchair travelling. Thank God for Google and Wikipedia!
I'd been to Morocco for a festival in 2008 and absolutely loved the country. It's got a rich history and a thrilling, exotic vibe to it. I remember the opening of Hitchcock's The Man Who Knew Too Much begins with a murder in Marrakesh.
Riga was a cold call location. The script had Amsterdam but for logistical reasons we could not shoot there. And then an actor friend mentioned Riga, where he had shot a foreign advertisement. My producer Dinesh Vijan went there alone on his way to our shoot in Morocco. He called me at midnight saying that he liked the place and I should check it out.
Riga, the capital of Latvia, is a lovely city with a population of just over 7 lakh. It was the ideal location for the action sequence in the second half. We have also shot in the city's National Opera Theatre and more.
We shot in several other countries but our climax is set in New Delhi.
How did Saif Ali Khan join as producer?
I had narrated a love story to Saif, but he said, 'why are we doing a love story?' We got talking about the movies we loved and Bond came up. Saif is an encyclopaedia on Bond films. Then, suddenly, we remembered the old Agent Vinod and got excited talking about it.
In that instant we decided that we'll make this movie. The producer I went with hated the title. Are you guys mad, he asked. Luckily a couple of years later, Saif turned producer. I got a call from Dinesh Vijan saying we want to make this movie.
I do hope that the producer who hated the title likes the film.
How easy or difficult is it when your hero is also your producer?
Both easy and difficult. This is Saif's dream project and obviously he wants to ensure everything is top notch and perfect.
With the best of intentions, two people will not think alike all the time. So we had our arguments about scenes, treatment and so on. The press interpreted this as interference. But I love this involvement. We are fighting to make our best movie.
Saif has a keen aesthetic and has helped me make a better picture. Not once did he or Dinoo try to cut costs. On the contrary, they pushed me and my team to go for it.
Tags: Riga , Saif Ali Khan , Dinesh Vijan , Arijit Biswas , National Opera Theatre

'The big problem was that if Saif comes late to the shoot, I can't complain to the producer!' 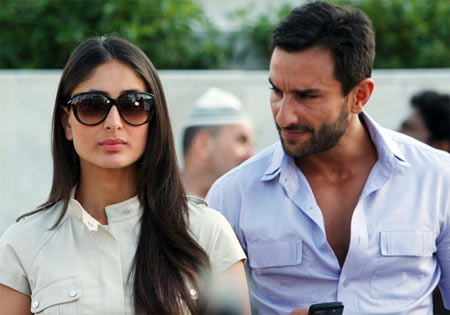 So how easy or difficult was it to work with Saif?
On the set, Saif was not the producer. He was just the actor. The big problem was that if he comes late to the shoot, I can't complain to the producer!
You gave us a new Saif in Ek Hasina Thi. Will you be giving us a new Saif here as well?
I am not the right guy to say this but I think he has done a superlative job. My co-writer Arijit Biswas and I have written the character but Saif has made Agent Vinod a lot more than what he was in the script.
Can you tell us something about Kareena Kapoor's role in the movie? Apparently, it is a new avatar for Kareena as well.
Kareena has many avatars in this film and I would like the viewer to discover the truth about her, just like Vinod will find out at a crucial point in the film. She plays a character with grey shades. I wouldn't like to reveal more at this stage.
What was working with Kareena like, particularly since this is practically a home production for her?
She's a spontaneous actor and a joy to work with. There must be something about the Kapoor genes that make them all such good actors.
There were some who said that a real-life couple never works on screen but that didn't ever worry me. My challenge was to write a role that excited her as an actress.
Tags: Kareena Kapoor , Saif , Vinod , Arijit Biswas , Hasina Thi 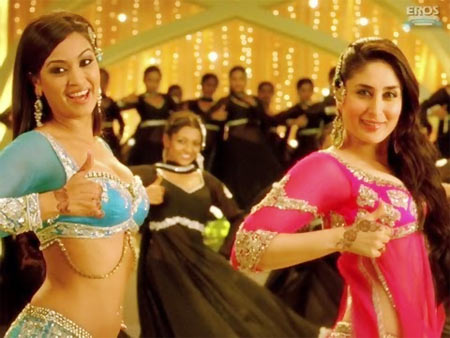 So you're happy with Saif and Kareena's on-screen chemistry?
I'm happy for sure but also nervous. I keep saying in interviews that once the film begins, viewers will forget the real-life couple and invest in the characters of Vinod and Iram.
You watch and decide whether the Raabta (meaning 'relation' and also the name of a song in the film) happens.
As a director, you are known for not adding superfluous details. So, why the 'item' song in the film?
I guess you are referring to the mujra. It was always in the script. Every song in this film is also a scene. It does not stop the story but takes it forward.
The item song is not necessarily a bad thing. It helps get the viewer's attention before the release, creates curiosity and awareness about the film. Though, in our film, the Pyaar Ki Pungi song is the real item. It's a madcap Vinod moment.
Agent Vinod can do almost everything that Bond and Bourne can do. But James Bond and Jason Bourne cannot ever do a Pyaar Ki Pungi.
Why did you need a new face, Mallika Haydon, for the item song?
She's fab. I love her in the Pyaar Ki Pungi situation.
Tags: Jason Bourne , Pyaar Ki Pungi , James Bond , Mallika Haydon , OJames Bond

'I am a big fan of Prem Chopra' 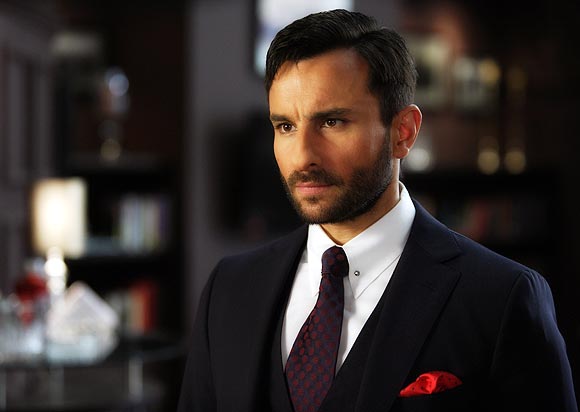 Why did you think of casting Prem Chopra?
We were writing this character of an elderly Mafiosi from Morocco and who better than Prem Chopra? Audiences today know him from Rocket Singh and Delhi 6, but there was a time when he played colourful baddie roles.
Are you a Prem Chopra fan? Which films of his are favourites?
Oh yes, I am a big fan of Prem Chopra. I remember him from movies like Kati Patang, Teesri Manzil, The Great Gambler, Upkar, Do Anjaane, Premnagar and so many more.
Who can forget his iconic 'Prem naam hai mera, Prem Chopra' line from Bobby? He has worked with the biggest of filmmakers and actors and yet he has humility to the medium which is fantastic.
Do you see yourself making films in different genres?
I love Hitchcock, who only made suspense films. I also love Billy Wilder, who made some great thrillers like Double Indemnity and Witness for the Prosecution but also worked in a variety of genres. I will work in different genres for sure.
What's next on the agenda after Agent Vinod?
A two-month break -- to recharge, catch up on the films I missed.
Tags: Prem Chopra , Teesri Manzil , Do Anjaane , Kati Patang , Billy Wilder
More