'I was bullied into making Cocktail' 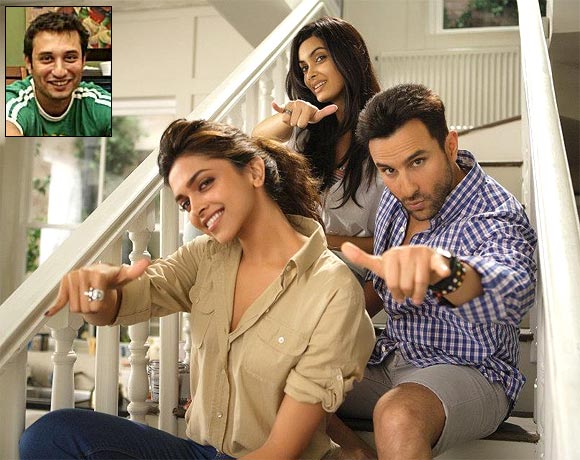 After directing the Saif Ali Khan thriller Being Cyrus six years ago, filmmaker Homi Adajania moved away from the movies, and went scuba diving!

He returns to the marquee this Friday with Cocktail, starring Saif again, along with Deepika Padukone and newcomer Daina Penty.

He tells Sonil Dedhia what made him return to direction, and why he will never cast his pretty wife, stylist Anaita Shroff Adajania (who has worked in films like Dhoom 2, Race and of course, Cocktail)

You made your first film Being Cyrus six years ago. Where did you vanish for all this time?

Why is everyone asking me this? When I made Being Cyrus, I never thought of becoming a filmmaker. I made my first film just like I do the other bizarre things in my life.

When I finished making the film, I went back to my old life. I was travelling, reading, writing and doing scuba diving. Many people have asked me when I will make my second film and I told them it will happen when it has to. Also, nothing interested me.

So what makes you now make a film that is completely different from what you made earlier?

I was actually bullied by Dinesh Vijan to make Cocktail. He wanted me to move out of my comfort zone.

We discussed some stories, which were too offbeat. I was also writing Finding Fanny Fernandes, which is a funny satire based in Goa. Dinesh told me that you are going to make a Hinglish film which only 10 people will see (laughs). He told me about Cocktail.

I met Imtiaz Ali, who is the writer of the film. He has a very unique style of writing -- in a stream of consciousness. There are no punctuations. He just writes as he thinks and in the end joins everything.

He narrated the first half to me. I didn't want to direct it. But he pursued me for a month. I thought about it and then decided to make it. I realised that I wasn't doing the film because I was scared of not knowing how to do it.
Tags: Being Cyrus , Dinesh Vijan , Anaita Shroff Adajania , Daina Penty , Imtiaz Ali

'I think Cocktail has a lot of me in it' 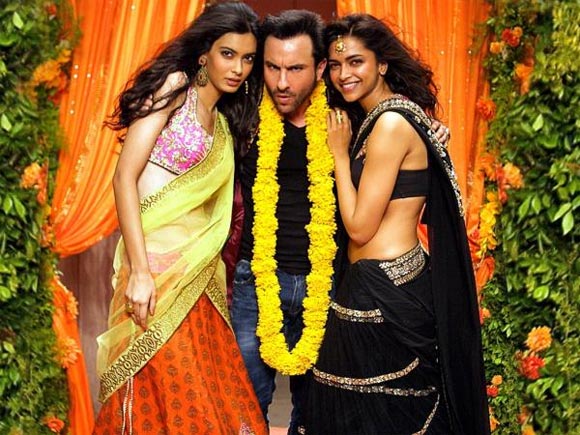 How much have you changed the script once you decided to make the film?

Once I decided to make the film, Imtiaz gave me complete freedom to take it forward as I wanted.

I sat with Imtiaz's brother and started building the scenes and characters. I made very few changes. I stuck to the characters and the story. It's just that I changed the scenes as I wanted to see them on the big screen.

A lot of Imtiaz's classic dialogues stay in the film. He is a great writer and he has got a very fresh approach to writing dialogues.

Is it uncomfortable to direct a script that is written by someone else?

I wasn't uncomfortable it was a strange situation for me.

Having said that, I love taking other people's stories and twisting them (laughs), but it wasn't odd because I think I had a peculiar feeling that I was hired to tell someone else's story.

Once you take charge, it pretty much becomes your story. I think Cocktail has a lot of me in it.

Did you have to move out your comfort zone for Cocktail?

It totally took me out. If I had to make another film like Being Cyrus, I would have been in my comfort zone, but it's pointless. I didn't want to tell something that I had already done because I believe I wouldn't be interested in making something similar to Bring Cyrus.

Dinesh told me that he wanted me to direct Cocktail because he thought I would have a fresh take on the story as it wasn't familiar territory for me.

'I would love to work with Kareena Kapoor' 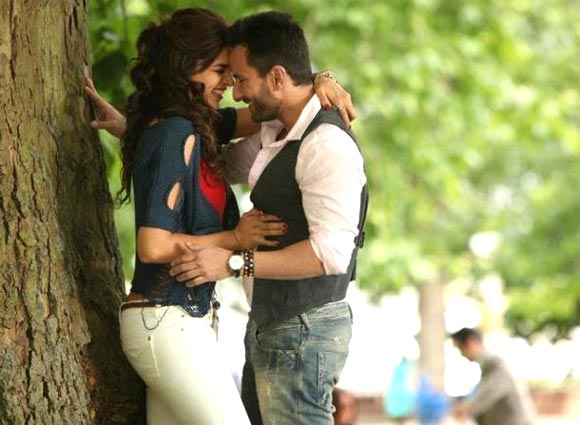 What convinced you to cast Deepika, Saif and Diana in the film?

Deepika cast me as the director (laughs). She was already on board when I decided to make the film. Dinesh told me that she had already decided to play Veronica (her character) in the film. I was quite surprised with her choice but I was also very impressed because it is not an easy role to play.

We were very clear that we wanted a new face for the character of Meera. When Diana Penty walked in, it was a gut feeling that she is the one. She had no baggage and was nervous and awkward in front of the camera, which was what the character required.

Initially, Imran Khan was approached for the film but he was not sure if he wanted to do the film. At the same time, Saif's agent gave him the script. He was anyway producing it and when he read the script, he immediately agreed to do it.

Do you think half your battle was won as the pairing of Saif and Deepika has really worked well at the box office in the past?

Not at all. The battle is only won when the film works. Today the audience has become so smart and mature. Look at the kind of films that are doing wonders. The extremes are all doing well.

I don't think anyone can predict a particular genre or a pairing of actors that will make a film work.

Did the thought of casting Kareena Kapoor in the lead ever cross your mind?

I would love to work with Kareena. She is one of the best actresses today. There is something very spontaneous about her. She could just embrace any character and do it convincingly.

When we started the film, she was shooting for Agent Vinod and it just never came up. Also, when I came on board, Deepika was already finalised. I am sure I will have the privilege of working with Kareena very soon.

'I wish I could make Vicky Christina Barcelona' 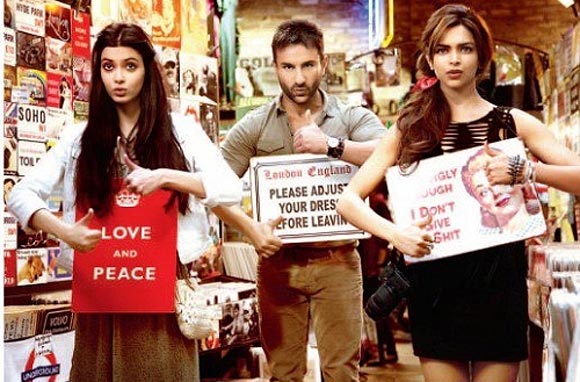 Being Cyrus didn't have any songs. Were you comfortable with the song and dance numbers?

Whenever I sing, Dinesh dances (winks).

I remember the first time he took me to Pritam's studio and he wanted me to listen to the scratch version of Daaru Desi. Pritam took his guitar and Dinesh clicked his fingers and they started humming something which was not even close to what the song is today. It sounded like a bad Goan song playing in a restaurant.

A week later, it became Daaru Desi. The whole credit goes to Dinesh. What worked for our collaboration was that there was no ego. We knew we had to balance each other's weaknesses.

The promo of the film gives the feeling that it is similar to the Hollywood flick Vicky Christina Barcelona.

It would play a part because it is one of my favourite films, so definitely there would be influences which I have been inspired by, which would sort of sneak into the film. But storywise there is no similarity. I wish I could make Vicky Christina Barcelona.

'My wife got Cocktail because she was sleeping with the director' 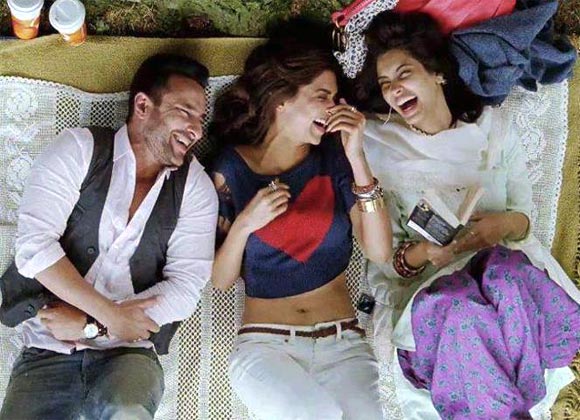 The styling of three characters in the film has become a huge hit among the youth. Your wife Anaita Shroff Adajania has done the costumes. Tell us a little more about it.

I am very finicky about the costumes and my wife is aware of that. I recently told someone that she got the job because she was sleeping with the director (laughs) and she was very pissed at me.

She has done a spectacular job. What's good is that she tried to keep things real and at the same time, within the parameters of the character.

Sometimes when she tries to be too fashion forward, I refuse it as it doesn't work out for me. But I wouldn't overstep and influence her.

What I like about her is that she actually predicts the time when the film is going to release and portrays the trend. She also has a good sense of what will look good on screen.

We see Deepika's character in the film doesn't wear pants when she is at home. On a lighter note, whose idea was it?

Who wears pants at home (smiles)? I suppose we wear it only when guests come over (laughs). 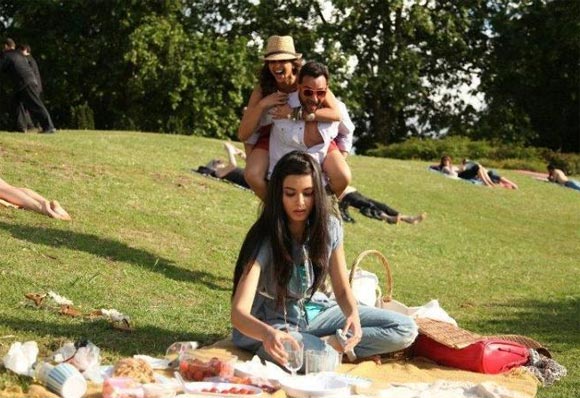 If you were put in a similar situation like we see in your film what would you choose between love and friendship?

It's verydifficult to answer it. Why are you asking me such difficultquestions (Laughs). You have confused me. I think you can never deny yourself true love as you have just one life. I think you can lovemore than one person in a genuine way. I think I would sacrifice love and let my friends get on with it.

Which Cocktail would best define the film?

I guess it has to be a dry martini, shaken and stirred with a swizzle stick, which would be Meera's character in the film.

What is happening with Finding Fanny Fernandes?

I am still finding Fanny (smiles). I want to make it and I am sure it will happen soon.