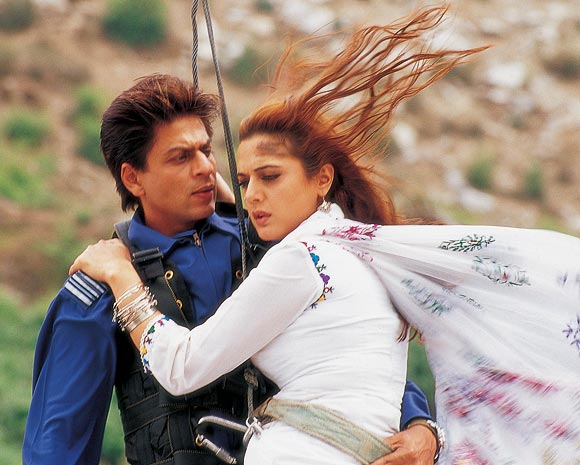 The king of romance Yash Chopra passed into the ages on October 21, when he succumbed to an attack of dengue.

Subhash K Jha tries to capture the iconic filmmaker in these excerpts of conversations over the years. Read on:

From Dhool Ka Phool in 1959 to Veer-Zaara in 2004, your cinema epitomizes romance in Hindi films.

People talk about the romantic aura in our films. Aura aise hi ban jata hai (the aura gets made anyway). It's a process I have no control over. If people expect Veer-Zaara to be the ultimate romantic tale, it could be because I'm directing a film after seven years. The curiosity for the film kept growing till the last minute because we couldn't decide a title. That wasn't intentional. People's expectations make me nervous.

After all these years, I still get as anxious and insecure about a release as I did when I made my first film.

When did your romance with romance begin?

I remember there was a sequence where a man and woman on different bicycles fell on each other. The censors asked me to delete the scene. Today, men and women are falling over each other for no reason. No one raises an eyebrow.

When I think of a love scene, I don't calculate how much should be exposed or which angle to capture the lead pair in. It should come from the heart. Otherwise, it looks fake. Not one member of any Indian family will be embarrassed by the love scenes in Veer-Zaara, and in most of my films.

'Deewar had only one fight sequence' 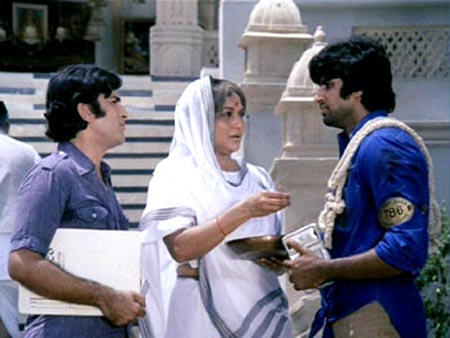 Image: A scene from Deewar

During the mid-1970s, you made a series of action films like Trishul, Kaala Patthar and Deewar.

Shall I tell you one thing? Deewar, which is considered to be one of the most successful action films, had only one fight sequence! It was the mother-son emotions that saw the film to its success.

Yes, Trishul and Kaala Patthar were action films. Those subjects came to me and I liked them.

Thereafter, I had a series of failures like Vijay, Parampara and Faasle.

Then one day, I was driving from South Mumbai to my home in the suburbs. Every hoarding I saw had men holding guns. I realised I was losing my way. I believed in romantic films, so why wasn't I making them? That's how I made Chandni.

When I was asked about the film's highlights, I said the songs are the highlights. When a distributor saw Vinod Khanna, in a romantic role, he left my film! When it was released, people predicted it would flop in week. But its success reaffirmed my faith in my vision and my audience. That faith has stood by me all these years.

'By showing skin, you can't get your film to make a long-lasting impact' 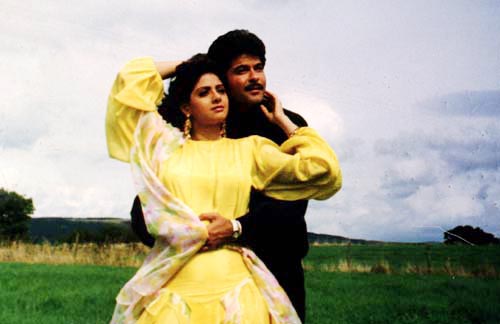 Image: A scene from Lamhe

What do you think of the way love and romance are portrayed today?

I think we've gone overboard. What we see in today's films isn't romance. Love is a very personal emotion. Our audiences have been exposed to every possible culture and experience on television. In the last two-three years, our films haven't been doing well. In desperation, filmmakers have turned murder, sex and nudity into formulae.

I believe Indian audiences go for stories with strong Indian values. That's the only formula that will last. By showing skin, you can't get your film to make a long-lasting impact. It's a passing phase.

When I made Silsila and Lamhe in 1981 and 1991, people said they were premature creations. When I'm pregnant with an idea, I have let it be delivered in its natural course. Silsila and Lamhe remain my favourites.

I'm specially proud of Lamhe. I don't know why it didn't succeed at the box office, maybe it was ahead of its time. But it got me the biggest critical acclaim of my career.

Silsila was the first film on extra-marital relations to have broken the barriers between offbeat and mainstream cinema.

Some films are destined to succeed in retrospect. This was the case with Guru Dutt's Kaagaz Ke Phool. On release, it was a disaster. Today, it's a classic.

Our business may be called showbiz. But we owe more to society than mere entertainment.

When I look back on my career, I feel God has been kind to me. Of course I worked hard to get where I am. But more than that, there's a power that has got me here. 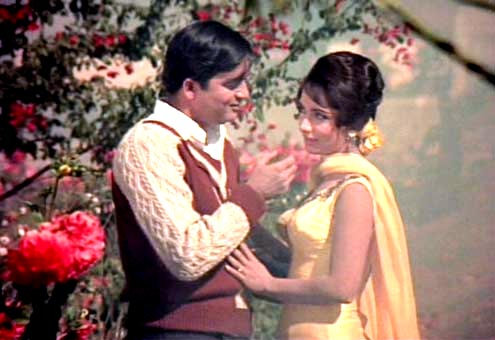 Many of your critics say your cinema is insulated against reality.

Whether it's arranged marriages, a man's battle with the machine age, corruption in the public sector, they're all there in my films.

My hit Waqt is considered an escapist entertainer. But it was actually a film about a man's destiny and how it cannot be controlled.

In recent times, social content including patriotism has become a formula. The man on the street has become blase about corruption. I decided to make films on the one theme that can never get outdated: human emotions and relationships. Somewhere there's a love story unfolding at every given point. I decided to give a new twist to the emotion called love in my films. If I can touch even one person's heart in any corner of the world, I'm a happy filmmaker.

As for social content, my very first film Dharamputra in 1961 addressed itself to the sensitive issue of communal relations. It sparked off disputes between Hindus and Muslims. Theatres were threatened with bomb scares. To assure that nothing went wrong my film's leading man Shashi Kapoor, my friend Deven Verma and I personally attended the first show at Mumbai's Maratha Mandir.

Do you get scared by audiences' expectations?

Earlier, I was judged as B R Chopra's younger brother. Then in 1973, I was nervous again, when I branched out on my own to produce and direct Daag. I knew I was doomed if it failed.

I remember the first trial show 12 days before release. People praised me but I could see the hesitation about the controversial subject -- a  man with two wives. And my leading man Rajesh Khanna had as many as eight flops before Daag. But to my relief, the film was a superhit on the first day. 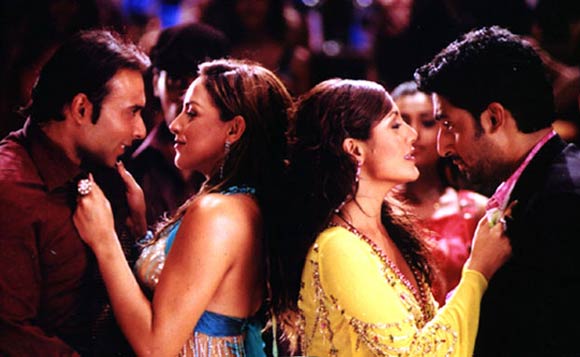 Image: A scene from Dhoom

How do you explain the immense success of your productions like Hum Tum and Dhoom which you don't direct?

That's my son Aditya's domain. He handles the creative side of our productions, I handle the financial aspect. When Aditya or I make films, we discuss everything in detail.

But a film like Dhoom is orchestrated entirely by him. Making a romantic film like Hum Tum wasn't so costly. But Dhoom, being an actioner, was very expensive. We had to import eight-nine bikes. Australian stuntmen participated, production costs shot up.

But when I saw the end-product, I knew it was going to be successful. Without major stars -- Abhishek Bachchan, John Abraham, Esha Deol and my younger son Uday aren't really big stars -- the film did unbelievable business.

'For the first time after DDLJ, we saw big money' 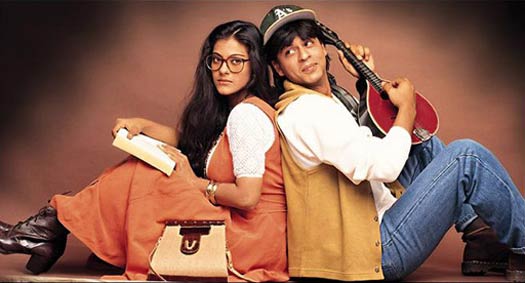 How do you explain the long-running success of Dilwale Dulhaniya Le Jayenge?

There're some phenomena that defies explanation. It's a miracle. DDLJ has broken all records to become the most successful Indian film ever.

When it completed 200 weeks, I though we had had our innings. But DDLJ kept growing. Now after 500 weeks, the general-manager of Maratha Mandir (a theatre in Mumbai) tells me it can easily go on for six more months. It still goes houseful during weekends!

Aditya was only 23 when he made DDLJ.

I still remember the first time  he narrated the story to me. I had tears in my eyes for two reasons. Firstly, it was because my son had written it. Secondly, because it was such a heartwarming story. I knew it would be a hit. But to this extent? Never.

It touched a chord in Indians all over the world and prompted them to go back to their country, traditions and roots.

DDLJ was the first romance where the boy takes the girl away only with the parents' consent.  The whole process of winning over the girl's family was unique.

It's also become a liability for Aditya.

Yes, it has become a benchmark for him. He can't make DDLJ again though I'm sure he'll always make good films.

I remember after the release, you told me you had never seen so much money in your life.

It's true. DDLJ has done many things for me. It has helped us realise so many of our  dreams. When I realised distributors aren't quite upfront in their dealings, I decided to become my own distributor. For the first time, we saw big money. I asked my son what he wanted. He said he wanted our own studio. Today, we have a state-of-the-art studio, thanks to DDLJ.