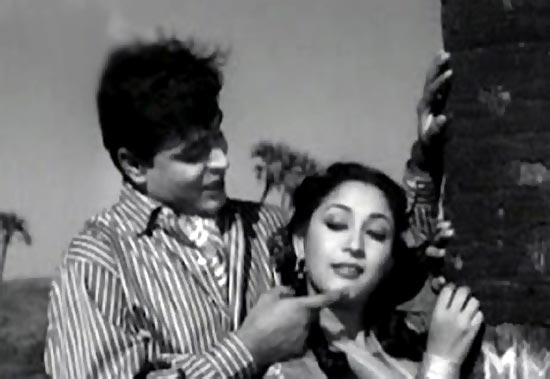 In his career, which began in 1969 and continues posthumously with the release of Jab Tak Hai Jaan on November 13, 2012, Yash Chopra had made a extraordinarily grand and invaluable contribution to Hindi cinema through his vivid interpretations of romance, comments on pedantic social structures, fascinating journey into the human psyche and larger-than-life portrayals of the anti-hero and an undying celebration of life, culture, beauty and nature.

Of the 22 films he's directed himself, some are outright classics, others are nice but even his most middling efforts are immensely watchable.

The 80-year-old filmmaker passed away yesterday leaving behind a flawless legacy to admire and cherish.

We pay a tribute to the legend with this compilation of his best films.

About an illegitimate boy and how social discrimination can produce detrimental results, Yash Chopra made his directorial debut under B R Films with a moving drama starring Rajendra Kumar, Mala Sinha, Ashok Kumar alongside gifted child actors like Sushil Kumar and Daisy Irani. 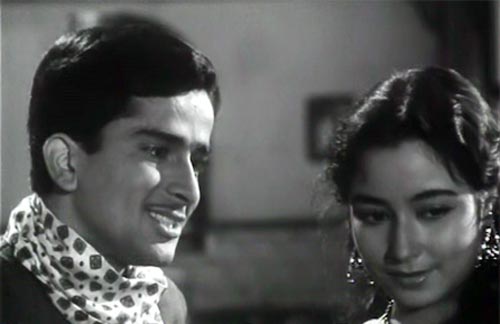 Image: A scene from Dharmputra

In this hard-hitting pre-partition drama, Chopra further established his reputation of a progressive filmmaker with an exceptional ability for sensitive storytelling. 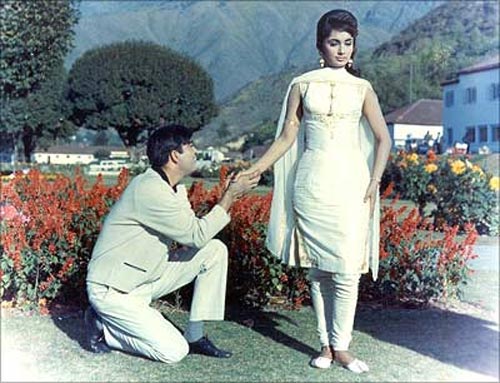 Unlike his previous films which concentrated on heavy-duty social dilemmas, Chopra build an entire plot to convey the mercurial temperament of destiny with his lost-and-found multistarrer, Waqt. 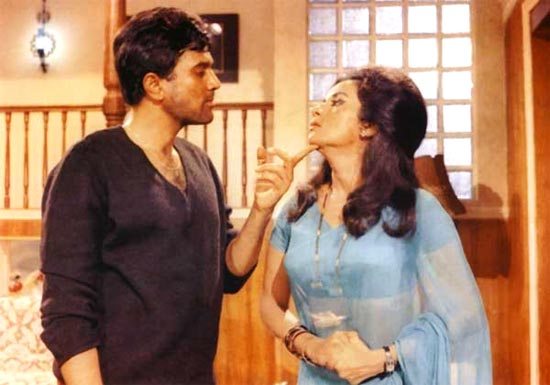 Image: A scene from Ittefaq

With every passing film, Chopra tried to do something new. In his thriller spanning 24 hours, he cast Rajesh Khanna as an edgy fugitive taking shelter in the home of a lone housewife, played by Nanda leading to some shocking revelations.

The film had no songs and fetched the director his second Filmfare trophy for Best Director after Waqt. 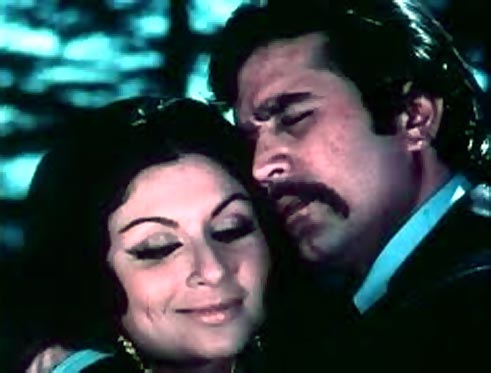 Image: A scene from Daag

The romance drama/suspense starring Rajesh Khanna, Sharmila Tagore and Raakhee, woven around one man with two identities and two wives owing to mysterious circumstances, was a huge success thanks to its engaging plotline, hit songs and crackling chemistry between the co-stars. 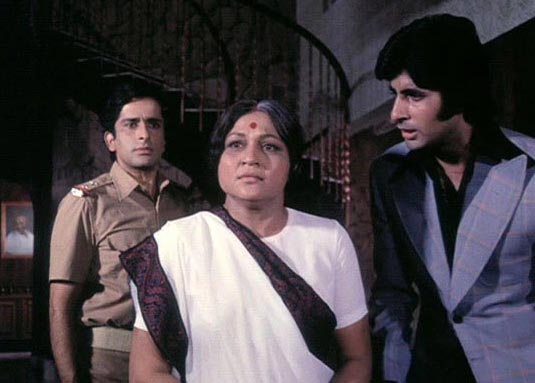 Image: A scene from Deewar

With the Salim-Javed penned mother-son story for producer Gulshan Rai, Yash Chopra arrived at a historical place in his career.

Everything about the film, be it its towering hero Amitabh Bachchan, his bold live-in relationship (back in the seventies the concept was practically unheard of) with Parveen Babi or pressing need to have mom Nirupa Roy's approval or series of face off with policeman brother Shashi Kapoor, Chopra's masterful direction in Deewar is stuff aspiring filmmakers strive for. 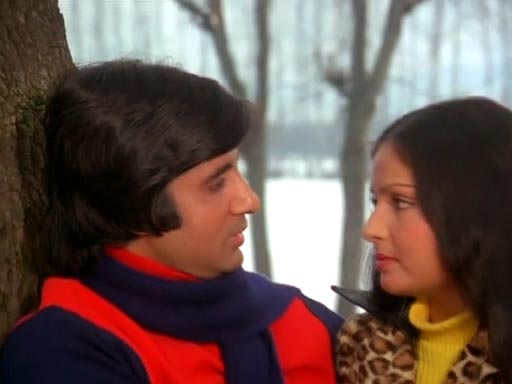 Image: A scene from Kabhi Kabhie

Chopra returned to the realm of poetry and romance with even more ardor and stars in Kabhi Kabhie.

The classic multistarrer boasting of all the big names -- Kapoors (Shashi and Rishi), Bachchan, Raakhee, Neetu Singh and Waheeda Rahman explored the extent of agony in separation and magnanimity in relationships against Khayyam's lilting score, especially its unforgettable title song. 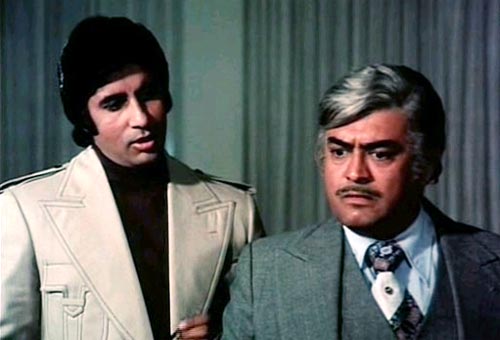 Image: A scene from Trishul

It's incredible how Yash Chopra cast the angriest young man of the 1970s-80s and successfully conveyed ample intensity without resorting to mindless dishoom.

His story of a son (Bachchan) avenging his mother's humiliation and suffering from his illegitimate father (Sanjeev Kumar) by bringing down his construction business is both riveting and remarkable. 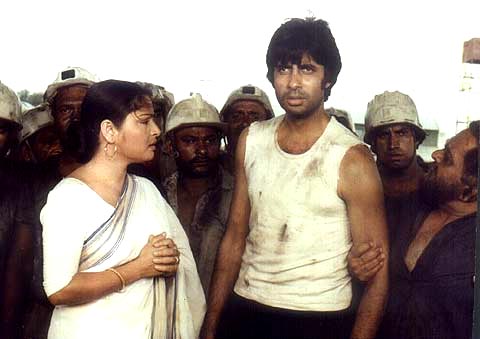 Image: A scene from Kaala Patthar

Though it doesn't have the sheen or glamour of his previous star-studded offerings, Kaala Patthar repeats his cast of Deewar and Trishul along with Shatrughan Sinha to present the ugly state of things in a coal mine set-up.

While the film itself wasn't a roaring success it is yet another example of Chopra's love for challenging scripts. 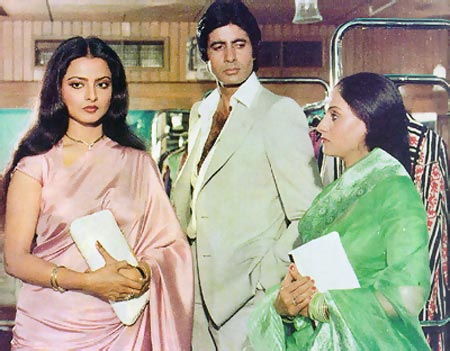 Image: A scene from Silsila

Doing the impossible, Chopra convinced Amitabh and Jaya Bachchan along with Rekha to star in his film about extramarital affairs.

Surprisingly, the movie, despite its picture-perfect passion, poetic fervour and absorbing narrative, failed to work with the audience. Over the years, Silsila has garnered quite a reputation and is considered a significant piece of filmmaking. 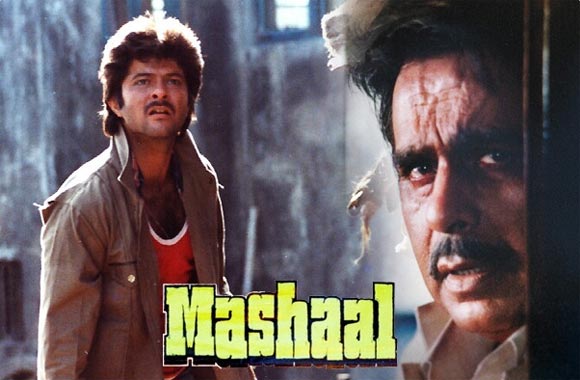 Image: A scene from Mashaal

Taking inspiration from Vasant Shankar Kanetkar's Marathi play Ashroonchi Zhali Phule, Chopra roped in Dilip Kumar and Anil Kapoor to play a conscientious newspaper editor and a aimless vagrant and how a tragedy leads to reversal of roles in Mashaal.

Chopra's vision of Javed Akhtar script boasted of some fabulous performances but wasn't appreciated at the box office when it first came out. 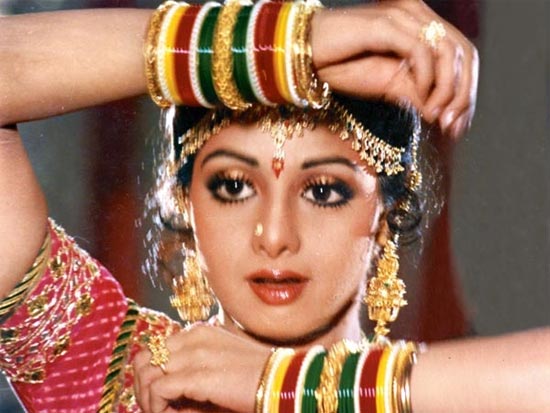 Image: A scene from Chandni

After a series of misfires, Chopra got back his groove with the resplendent romance of Chandni.

With his gorgeous display of snow-cladded Alps, a perpetually white-clad Sridevi, Rishi Kapoor's boisterous declarations of love in beautiful sweaters, Vinod Khanna's rain-time melancholy and some nifty choreography at grand Punjabi weddings, Chandni spells the A to Z of dreamy magnificence. 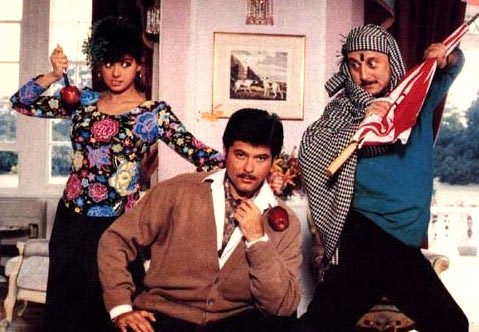 Image: A scene from Lamhe

Quite easily one of his most definitive films, Chopra surpassed his own findings of romance with the insightful, lovely Lamhe.

The exquisiteness with which he conveys the tender infatuation of Anil Kapoor with a slightly older Sridevi and then when the latter's lookalike teenage daughter falls for the suave, mature AK is one of the filmmaker's most prized accomplishments. Ahead of its time or not, Lamhe's failure is one of those bizarre, unexplained moments of cinema. 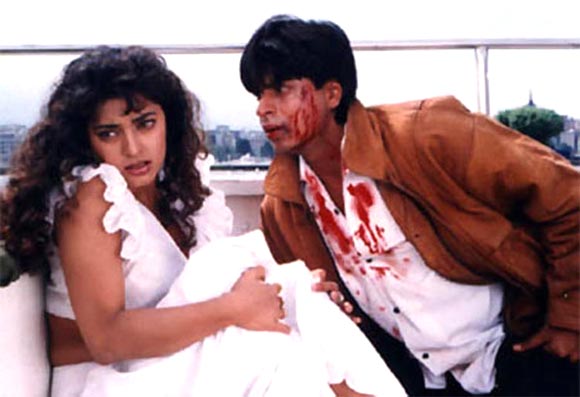 Image: A scene from Darr

Chopra continues to celebrate the fun of romancing against flower fields and majestic Swiss mountains around its dainty heroine (Juhi Chawla) and the two men in her life -- the obsessive Shah Rukh Khan and the protective Sunny Deol in a stalker's love story, Darr. 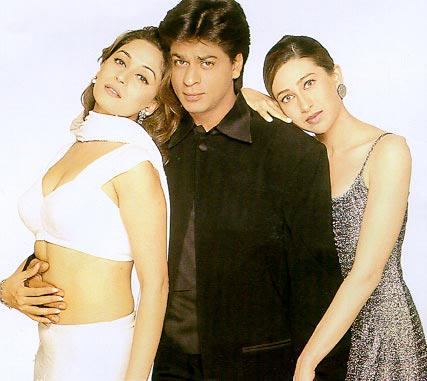 Image: A scene from Dil To Pagal Hai

Even after all these years, Chopra never lost a grip on his strongest point -- romance. The filmmaker produced yet another smash-hit musical with hot stars like SRK, Madhuri Dixit, Karisma Kapoor and Akshay Kumar.

While the story is fairly predictable, the Chopra brand of treatment, swish production values, terrific choreography and that enticing chemistry between its key players makes DTPH an effortless watch.