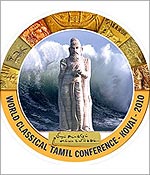 Scholars and academicians are gearing up for the biggest academic event of the year, the World Classical Tamil Conference to be held in Coimbatore from June 23 to 27.

Sung by 30 different artists who represent the cream of Tamil industry's musical elite, the lyrics have been penned by Kalaignar Karunanidhi. Here's what the anthem has to offer:

With an enthusiastic crash begins the Semmozhiyaana Thamizh Mozhiyaam anthem, starting out with the first Thamizh letter (the letter morphs from its earliest, centuries-old version to its present form), and the impressive words, "Pirappokkum Ella Uyirkkum," sung by legend T M Soundarrajan after a flash of Thiruvalluvar's statue at Kanyakumari, eagerly picked up by A R Rahman himself, singing "Yaadhum Oore, Yaavarum Kelir."

Other singers like Harini, Chinmayi and Karthik follow, singing the simple phrases that make up Thamizh's long literary lineage and even as Karthik's voice rises in an impressive crescendo, the instrumental background score takes over, and the song proper begins.

Montage shots of stone-etched Thamizh inscriptions flow, while Hariharan, A R Rahman and Yuvan Shankar Raja croon the song, and then the entire team of songsters take up the refrain, "Semmozhiyaana Thamizh Mozhiye " while the words glow in the background.

The beat thunders while it rises and ebbs across the musical plane. In the midst, another legend, P Susheela takes up the song, even as the Thamizh alphabet runs across the screen. Bharathanatyam dancers flit around while G V Prakash, Nithyashree Mahadevan and Sowmya show their vocal power, classical fashion.

Abruptly, the song changes courses, with strains of nadhaswaran, while Blaaze suddenly jumps into the fray with Thamizh rap, bizarrely beginning "Kamba Nattazhwan " The words sound odd and forced, but after a while, the fusion actually begins to appeal to you, courtesy the rhythm. Dazzling Thamizh letters intriguingly emerge from boiling oil as murukkus, while ethnic singers take up the chorus.

From hereon, the jump from classical to rap occurs more frequently; the melody is unstructured, yet appealing. Thamizh's gradual ascension from stone temples to blackberrys is shown. Singers like Naresh Iyer sing in pop fashion on brightly-lout stages, while at the same time, poi kal kudhirai and karakattam dancers spin around in festivals; even Chinna Ponnu contributes.

The anthem, meanwhile, rises slowly note by note, closing with a grand crescendo amidst crashing beats, even as the chief minister sits at his desk, signing documents with a flourish.

The lyrics themselves are unstructured at best, and take some time getting used to but the meaning contained within the instrumental arrangement and varied vocals make it a very pleasant musical experience.

Praise for Thamizh is lavishly sung, even while exploring its development through the centuries, its ability to adapt and stay within the common man's grasp without dying out, and evolving into the digital age.

A R Rahman has gone with his favourite template, it seems but even when you can predict the rise and fall of notes, it's still very appealing for the swift shift in genres and style. The lyrics and picturization undoubtedly add to the allure.