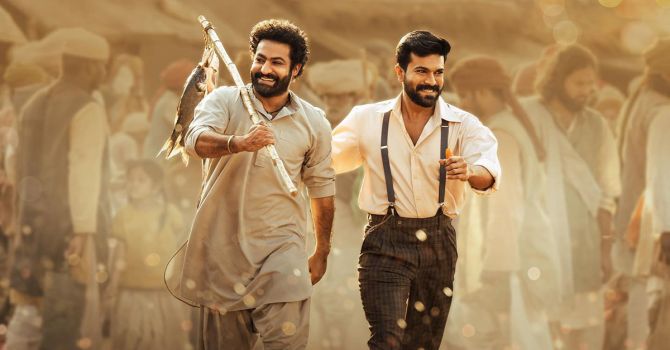 Everybody knows how cruel the British empire was.

But who knew they loved body art so much they would risk everything to keep a tribal kid hostage for her tattoo creating skills and provoke a tribe's ire.

Director S S Rajamouli has a knack for crafting mega visuals and captivating cinema out of wacky plots and overarching ambition but in RRR, it feels like he came up with the idea at a birthday party, where you have those tattoo artists sitting in one corner and drawing colourful designs on every child's hand.

Except in RRR, the roles are reversed.

It's the 1920s and India is yet to gain Independence when a pre-teen Gondi tribe girl's nightingale voice and afore-mentioned tattoo talent catch a bossy, beastly British lady's (a hilariously hammy Alison Doody) eye. She decides to make off with the kiddo resulting in much hysteria and heartache.

This instance of injustice is the trigger point or as Rajamouli dubs 'The Story' of RRR -- short for Roudram Ranam Rudhiram or Rise Roar Revolt, depending on whether you are watching the Telugu original or Hindi dubbed like I did.

What follows next are chapters called The Fire and The Water, personified by Ram (Ram Charan) and Bheem ( NT Rama Rao Jr) across overblown introduction scenes and ear-splitting background music.

If Ram's daredevil British officer singlehandedly overcomes a crowd of thousands to nab a protestor, Bheem is the local Tarzan who bathes in blood and bare-handedly takes on the wolves and tigers of the jungles he inhabits.

Among his other gifts, Ram is a master shooter and archer, can do pull ups despite fractured knees and fight a battalion while perched on a man's shoulder.

Bheem can make lac bangles within minutes, whip up herbal medicines in forest or streets and navigate through a battalion with a man perched on his shoulders.

They know Morse code, drums and dancing. And man, can they fly!

Ram is fire, Bheem is water. Lest we miss the symbolism, the pre-interval bout has one charging towards another holding a fire torch and water hose.

Likewise, Ram and Bheem are only superficially inspired by real-life Deccan revolutionaries Alluri Sitarama Raju and Komaram Bheem. Neither their hijinks nor their 'Har haath mein hathyar hoga' philosophy bear any resemblance to the freedom fighters not only reimagined by the Rajamouli brand but portrayed as best friends too.

When the twain first meet, they are saving a kid from drowning, which involves a horse, a bike, a rope, bridge and a whole lot of balancing act. (Actually RRR could add an extra R for rescue, it's all everyone does in the movie -- central plot, sub plot.)

In the next scene, they are scaling a coolie red-coordinated human pyramid for no rhyme or reason.

Amidst many such moments of spectacle-sans-context and giant platters of egg biryani, they turn BFFs.

There's no actual dialogue or bonding, but one song and enormous eye contact later, a bromance to die for is professed.

RRR rests on their contrived friendship, pitting a desi British officer with a promise to fulfill and the abducted kid's saviour as friends and foes.

It's a standard 1980s yarn of two-hero fare where best friends harbour secrets whose discovery causes misunderstandings until they realise they are after the same endgame.

Ditto for patriotism, which harks back to the era of campy Bob Christos embodying a villainy (Ray Stevenson) that raised Mard and Kranti's 'so bad it's good' quotient. Except revisit that aesthetic sans the humour and its Thugs of Hindostan catastrophe all over again.

'Every brown wanker thinks he can dance,' grumbles a gora suitor, unable to digest the belle of the ball, ignoring his blue-eyed good looks for Bheem's scruffy charms.

A vigorous desi dance-off follows, the British are humbled and another 'item' is checked off RRR's list.

Barring the kindly English Rose (Olivia Morris) who'll help the hero and arouse no one's suspicion, every single British character is a growling caricature whose love for torture and whiplashes gets the extra cheese treatment under Rajamouli's exaggerated vision.

So it's not just *any* whip Bheem receives a lashing from.

But a super spiked edition, the kind reserved for a certain Thakur's shoes.

Trembling in blood and pain, Bheem grabs this opportunity to sing and stir revolution within the sleepy crowds.

This is Rajamouli after all.

The man will show coronavirus vaccines can be produced from cotton balls and we'll buy it.

But RRR is a complete misstep.

What ought to be audacious looks far-fetched.

Emotions run sky high, but you feel nothing.

People on the good side, people on the bad side are tossed, battered, crushed, pummelled, beaten, bitten, strangled, whipped, shot, stabbed, there's no end to all the chasing and bleeding, streams of it literally, but the excesses get tedious to bear.

Unlike Baahubali or Eaga which had fantasy, mythological or supernatural backgrounds, such over-the-top is misplaced in RRR's action-packed objective of friendship and revolution.

Instead, the constant supply of flying men no different from gymnasts and trapeze artists and horses, cheetahs, tigers, wolves, snakes lend RRR the air of a ciRRRcus.

Technically too, RRR is no great shakes.

The CGI is uneven and VFX overkill robs the adventure of any raw, organic texture.

One could disregard the lack of period detailing in sartorial terms but watching a character roam about markets with a Yashica camera around her neck when it didn't come into existence till 1949 is baffling.

There's also the problem with the on/off Hindi voiceover translating the English lines.

It's inexplicably erratic, like a defective radio whose volume comes and goes on whim.

NTR Jr is perpetually in overboard mode and his 'Bhai Bhai' ardour gets overbearing at places.

Ram Charan exudes charisma and stands tall himself despite the flighty manner the screenplay makes him jump between moods. Though they exude fabulous energy in their respective parts, the chemistry is just not there.

The women are perfunctory.

All they have to do is look sparkling at all occasions as snivelling supporters or casualties of violence.

Alia Bhatt slips in 'Sita' mode awaiting her 'Ram's return in an extended cameo that seems even more undeserving of her talent after the success of Gangubai Kathiawadi.

Ajay Devgn as the rebel leader forming the backstory for Ram's retribution, is back in another guest appearance after Gangubai. His calm and restraint is a welcome relief in an otherwise breathless session of crash, bang, boom.

RRR throws so much from all directions and yet I left the theatre feeling nothing. 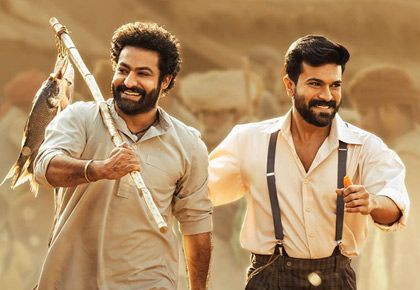 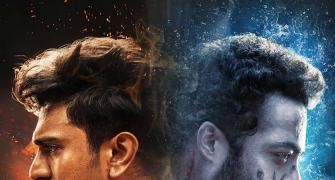 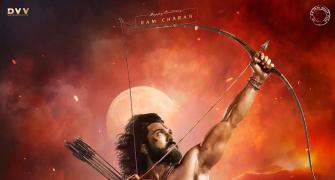 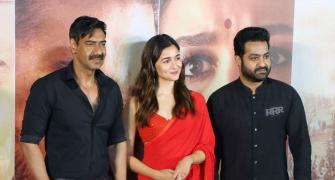 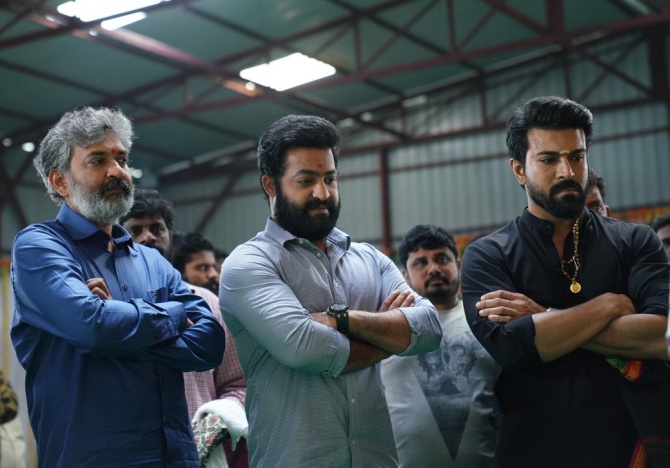