Arjun Rampal is the best thing in the biggest budget Indian feature of all time, says Raja Sen.

Once in a while, movies compel you to write odd things. You end up with sentences you stare at in disbelief, wondering if your fingers misled you or you slipped up dyslexically, missing a crucial word or a thought. This film, the biggest budget Indian feature of all time, provides one such daft line: Arjun Rampal is the best thing in this movie.

That fact should, in itself, tell you all. Still, I'm getting far ahead of myself. Ra.One is a subpar superhero film with a mediocre soundtrack and occasionally terrific effects. For those of you looking to compare, it's well below Krrish on the superpecking order, and far, far below Robot.

It has a good villain in Rampal, a striking heroine in Kareena Kapoor and a visual effects team that, while derivative, gets the job done rather well. The problem lies in the hodgepodge script -- a congealed instant-noodles mess of mixed flavours and overzealous Bollywoodisation -- and, even more crucially, in the man.

There is far too much Shah Rukh Khan in Ra.One, and while the man can normally be counted on to entertain no matter how completely he overwhelms us with his presence, this is him trying too hard in a film that straddles the disparate worlds of Shankar and Farah Khan, and, having been made by Anubhav Sinha, falls painfully flat.

Somewhere in the script was a simple idea -- that of a video game villain wreaking havoc in the real world -- with potential for an enjoyable romp, but as the unambitious plot was scaled up to dizzying heights, much masala was injected thoughtlessly into it, as if each scene in isolation needed to be packed with every colour of cool.

The film's narrative, as a result, is disjointed and sluggish, with a mere handful of good scenes. The rest is not just filler, but lengthy, exhausting, filmi filler -- the kind of kitsch a film like this should really have left behind.

An Amelie-haired young boy (Armaan Verma) addicted to video games considers his father (Khan) a loser despite the fact that he makes high-concept games. Driven to create a game 'bad' enough to win him some brownie points, Khan's dweeby techie comes up with a villain loaded with artificial intelligence, one nearly impossible to beat.

From 'Random Access One' they start calling him Ra-One, at which point a Chinese colleague wonders if the game's hero could be called something similar. "G-One! Does it mean anything in Hindi?" he trills enthusiastically, since that's what a London-based software firm would obviously prioritise in its international products.

(Language is a constant irritant in the film. Shah Rukh introduces his luscious wife Kareena Kapoor to the aforementioned colleague's Chinese mother with "my better half," to which the lady says "Ni hao" and Kapoor diligently tosses in a "Namaste." Later, when Khan is held up by a London thug, he speaks in English while the goon helpfully talks in Bob Christo-accented Hindi. Ah well.)

The game itself, set in the year 2050 -- an ill omen for the film if ever there was one -- proves to be unimpressively simple, considering Khan's young son starts beating it the very first time it's ever played. It consists of full-body virtual reality suits, cool as a concept, but considering you'll have to leap in the air and execute a flying dropkick instead of just pressing Up and the yellow button, seems significantly tiresome.

Like the film itself is, slavishly throwing nonsensical jargon at us instead of letting the bad guy out as soon as possible.

The only saving grace in the first half is Kareena, who dazzles even as she acts her way out of a paperbagful of stock situations. By which I mean she acts just fine, but looks absolutely jawdroppingly ravishing, better perhaps than she ever has. The hemline of her white dress is the only reason to watch the Criminal song, and the one wicked moment she has is the film's only genuine surprise.

The effects, as said, are impressive but only occasionally. The action setpieces, while visually adept, lack urgency and propulsion. The most striking effect is that of RaOne and G-One taking shape as characters in the real world, big pixelly blocks building upon each other, the Tetris-like assembly delightfully looking like graphics rendering gradually. RaOne starts out like a Neo knockoff from The Matrix, but clearly means business once Rampal is in control. Rampal's menacing, cold and can dish out a helluva piledriver  and appears in maybe six scenes in total.

The rest is for the filminess, you see. For G-One to wonder what Karvachauth is and then hug Kareena as voyeuristic neighbours cheer them on; for random pseudo-sufi yells in the background as characters feel pangs of emotion; for plotpoints to be reiterated over and over and over again. And, most critically, for embarrassingly broad 'comedy' that never ever gets a laugh. The Rajnikanth cameo works, sure, but does so by default -- and makes no sense whatsoever.

There are people who will let this film slide. Who will say it's not bad "for a Hindi film." That if we make a superhero film we'll have to add in lots of Bollywood to make it commercially feasible, and this is as good as it gets. Hogwash. For those doubters I have two words: Mister and India. I'm glad Khan stuck his neck out and gave us a project of this magnitude, one other genuinely inventive superhero movies will doubtless use to create truly special films. Ra.One, of course, is far from it.

There is but one prerequisite of a superhero film: A central character we care about. Here, as Khan flits from hit persona to persona, there is no sense of consistency. The game designer appears sometimes socially handicapped, and sometimes (in flashback) an utter charmer; G-One speaks haltingly like a robot, and then breaks into rap. The film seems to think that nothing seems to matter as long as there's enough Khan, and it becomes tragically evident that this is a project born more out of vanity than passion.

What Aseem Chhabra thought of Ra.One 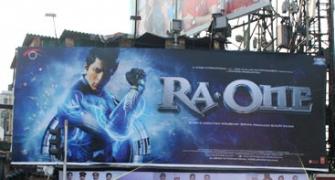 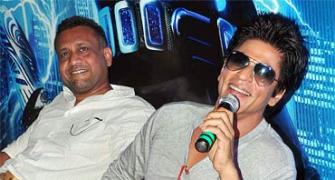 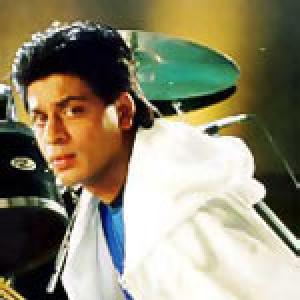