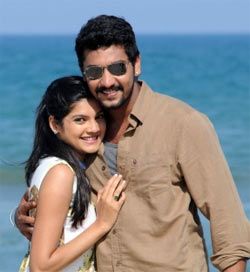 Director Chimbu Deven is known for his fantasy films such as Imsai Arasan 23-am Pulikesi and Arai En 305-il Kadavul that were loaded with humour and satire.

His concepts have always been quite unusual, portraying his completely different thought process.

In OKMK, he attempts to bring out the significance of every single moment in our lives. He shows us how even a single minute can decide the fate between life and death.

OKMK is produced under their home banner, Mohana Movies and is presented by J Sathish Kumar's JSK Film Corporation.

Natarajan Sankaran has scored the music, Kathir is the cinematographer and Sreekar Prasad is the editor.

Sitting in their heavenly abode, Lord Shiva, Brahma and Narada are in the midst of a very serious discussion. Narada is of the opinion that one's destiny is not specific to time, while Shiva and Brahma argue that even a minute’s delay can drastically alter a person’s destiny.

To prove this point, the gods decide to perform an experiment, and a random selection is made. Tamil, Essaki (Bagavathi Perumal) and Malar (Bindu Madhavi) are the chosen ones, and three different versions of an incident in their lives is highlighted.

The story then moves to the earth, where Tamil, Essaki and Malar are planning to kidnap Isabella (Ashrita Shetty), Tamil’s

girlfriend who is being forced to marry against her wishes by her rich father.
Though Tamil’s kidnapping plan is motivated by love, he has an ulterior motive -- money.

He is being offered Rs 30 lakh by Hippy Lahiri (Nassar), a former business competitor of Isabella's father, who dresses all in white and sports a multitude of gold chains around his neck.

The exact time they leave the house on the day of the kidnapping is the key to their destiny. In the first scenario, they leave at 8:59 in the morning. This is followed by what happens when they leave at 9:00 and then later again at 9:01.

The film is quite interesting as each time they leave the house, the life of all the individuals they meet on the way also changes. Eventually, this decides the outcome of the kidnapping plan.

The director has put in a lot of work detailing every scene. The action of each and every character in the subsequent scenarios is perfectly in sync.

The characters are all slightly quirky and this adds to the humour and satirical elements in the film.

Performance wise, all the lead actors as well as the vast supporting cast, have done their bit for the director. Technically, too, the film is sound.

The only drawback is that despite the director's best efforts, the repetition of each and every scene in all the three scenarios becomes a little tiresome, especially the third time around.

The film is not your average run-of-the-mill romantic comedy and may not appeal to all, but the director does deserve credit for attempting a different concept. 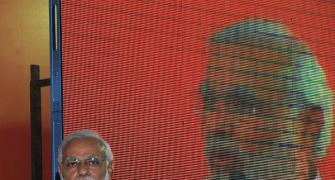 Modi makes 3 promises to himself 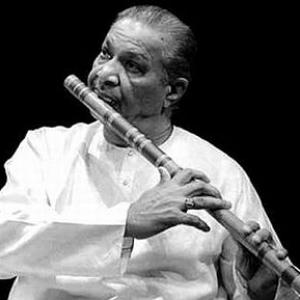