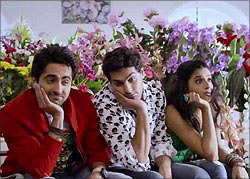 When it comes to recounting an event or anecdote, I have encountered two kinds of people.

There’s one who can engross over the plainest of stories by embellishing it with colourful expression and vivid details. The other, however, can turn the most spellbinding yarn into a cumbersome exercise with his needless digressions, numerous pauses and speech interruptions.

In his fourth film as director, Rohan Sippy finds himself swiveling in the midst of these two extremes. Without doubt the man is bright when it comes to the visual design of his films and injecting funk in its eclectic sound. Also, few can shoot Mumbai as memorably as he does.

He renders the same stylised treatment on his latest, Nautanki Saala, an official remake of Pierre Salvadori’s Après vous. (It may be recalled Katrina Kaif was in a bid to buy the rights of Salvadori’s Audrey Tautou-starrer Priceless, eventually procured by UTV.)

I have not seen the French original but I believe Sippy rewrote quite a bit to fit it in the Indian milieu changing the backdrop from a restaurant to a theatre. The latter gives him a platform for inventive imagery and being the technical wizard he is, does just that -- from resplendent lighting and elaborate props to artistically choreographed sequences, depicting a grand battle of shadows against the blood red curtains.

The film begins inside a shrink’s office with theatre actor/director Ram Parmar (Ayushmann Khurana) revealing the reason behind his sudden loss of appetite, insomnia, heavy drinking, three simultaneous break-ups and, maybe, why he is tugging so tightly to a teddy bear that resembles Ted (in mute mode)?

In this apathetic city, where everyone begins honking crazily and gets abusive if a car takes just two extra seconds to start after the signal turns green, Ram not only notices a man (Kunaal Roy Kapur as Mandar) trying to take his life but also takes him in, provides him with food, clothing, shelter, hospital bills, applying Betadine on his butt, drives him to Pune, meets his grandmother (Sulbha Arya), refuses to be repulsed by his mucous dripping nose and then promptly offers the guy a parallel lead role of Lord Ram in his play, Ravanleela while working over-time to fix the hopeless chap’s messy love life, also the reason behind his initial suicide attempt.

It’s all very far-fetched obviously since Ram isn’t lonely or desperate for company. He doesn’t exactly seem like a philanthropist either.

The man appears consumed by theatre and his live-in girlfriend (a charming Gaelyn Mendonca); he’s clearly very successful, affluent -- lives in a tasteful pad in SoBo with pockets overflowing with 500 rupee notes.

Sippy does this nimbly. He keeps the incredulity so understated allowing Khurana to play the good guy card without fuss while Kunaal doles out a gloomy Eeyore to the T. And, you buy the quirky premise. It’s also worth noting (and appreciating) how Nautanki refrains from any homophobic humour whatsoever.

Accents are often used as a means to amuse. Sippy uses the ploy but without any intent to ridicule or distort cultural stereotypes.  And so you chuckle without remorse when Ram’s producer Chandra (Sanjeev Bhatt) brings up Naseerundin Shah, Parvesh Rawal and Abhishesh Bachchan or a robotic receptionist (Sheela Das) rattles off standard protocol like one of those Udipi joint waiters in fast forward.

For all its frothy build-up, which peaks during Mandar’s disastrous audition turned hilarious game of dumb charades scene and Ram’s bumbling attempt to pass him off as an actor of note (a la The Emperor’s New Clothes), Nautanki Saala never really takes off as a full-bodied story.

The basic problem here, despite the potential, is the script progresses too slowly. Especially after Pooja Salvi’s Nandini comes in the picture; it’s not just Ram and Mandar who lose focus.

True, there are moments of genuine laughter but this fleeting gratification demands extensive wait and endurance.  Sippy punctuates his scenes with too many pauses resulting in a dawdling pace and delayed conflicts, which makes its 130 minutes running time lengthier than it should.

It doesn’t help that Salvi has a wobbly screen presence and cannot elevate her one-dimensional character to likeable forget impressive.
Her scenes with Khurrana feel terribly awkward and lethargic even if they kiss for about one reel of Nautanki Saala. And also because her presence invariably brings her cringe-worthy ex-boyfriend Loli (Rufy Khan) -- short for Lokesh Limaye in the picture.

Khurrana, himself, is in terrific form. After Vicky Donor, I was worried he may get slotted in the smooth-talking lout roles but his pliability and relaxed poise as Ram reflects his range. Kapur, of course, gets maximum applause with his restrained, unaffected performance as the weepy, moody, pessimistic and low on self-confidence/esteem Mandar.

He gets the tone of Mandar so right, so real without even once trying to go the freak route.

Rohan Sippy’s creation shows so much promise and has several moments (even if most of them are featured in its trailer). But the plot seems better-suited for a sitcom episode. As a film the nautanki stretches for too long, saala. 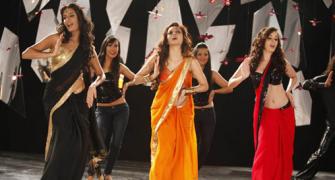 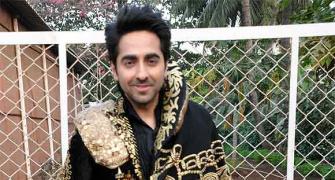 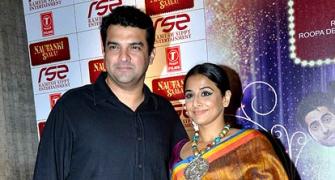 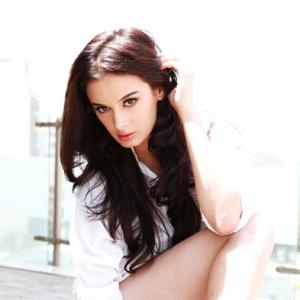 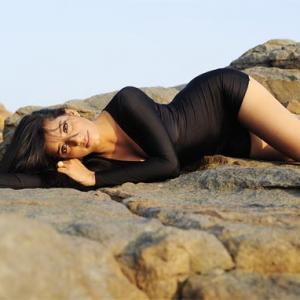