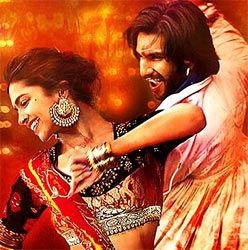 With a perfect mix of folk and fusion songs, Ram-Leela's music stands out from the rest and is a sure shot winner, writes Joginder Tuteja.

When it comes to a Sanjay Leela Bhansali film, music is expected to play a vital part in the proceedings.

Bhansali turned music composer with his last film Guzaarish's and gave some good music, but couldn't really warrant the kind of commercial elements that would have ensured a chartbuster status for it.

But Ram-Leela, by the virtue of it being a love story, warrants that music stays on to be an integral part of the narrative.

This is the reason why one gets to hear an album which has as many as ten songs in the play. Bhansali returns as the music composer and lyricists Siddharth-Garima being introduced, the results are exemplary to say the least.

The album starts on a smash note with the title song Ram Chahe Leela, which gives the kind of kick-start that a high adrenaline love story that Ram-Leela warranted. A good fusion number that brings on Western elements into Indian folk and classical is made further special by singer Bhoomi Trivedi (she was one of the Indian Idol finalists).

With Priyanka Chopra being the face of this 'special song-n-dance' routine, one can well expect a cracker of an outing here.

Shail Hada, who debuted as a playback singer with Bhansali's Saawariya and also sung two songs in Guzaarish, is roped in again for Lahu Munh Lag Gaya. A passionate love song which has again has a folk base to it, it also carries a strong flavour of the kind of music that Bhansali has ensured in his films, case in point being Hum Dil De Chuke Sanam and Devdas. The song isn't one of those regular feel good romantic numbers and carries certain maturity to it which should do well in bringing in a situational appeal.
The singer is heard again, this time with Aditi Paul taking the lead in Ang Laga De. This time around, the song has a strong Indian classical feel to it, something that goes quite well with the overall feel and flavour of Ram Leela.
A slow moving haunting number that works quite well when heard in the quietness and darkness of the night, it may well accentuate the visuals on the big screen. This one belongs to the category of songs that need to be heard on a loop before one gets a hang of it.
Shail scores a hat-trick with Poore Chand coming in next. A solo track, it finds it's place well into the kind of ambience that the film manages to create for itself. With a classical base to it, this one is the song for the night where it is expected that sensuality would have a role to play, while aesthetics being maintained.  A situational number that should work well as a part of the film's narrative.
After a few relative low key outings, there is euphoria in store with Shreya Ghoshal bringing in the kind of energy that is required to make Nagada Sang Dhol special indeed. A quintessential Navratri number, this one is also well integrated into the film's plot, especially if one sees Deepika Padukone going all out with her dance moves. Reminding one of Dil Dola Re (Devdas), this song with Osman Mir as the co-singer should be a highlight of the film. Also, it successfully manages to show a different facet of Deepika Padukone.
It is time to return into semi-classical mode with Arijit Singh, the man who has given many a chartbusters with Pritam, to come behind the mike for Bhansali. He is brought to fore for Laal Ishq which is as subtle as it gets, what with the sound of temple bells giving an edge to the way the song proceeds. An easy to ears number which has a soothing feel to it, Laal Ishq is for the ones in love.
There is fun in the proceedings that arrives on the scene with Aditya Narayan, who tried his hand acting with Vikram Bhatt's Shaapit, returns as a singer with Ishqyaun Dhishqyaun. Now this is one song where Sanjay Leela Bhansali indeed let's his hair down because he (successfully) creates the kind of mood, flavour, pace and set up that Lakshmikant-Pyaarelal did so successfully right through the 80's and the 90's. A song that has 'masti' written all over it, Ishqyaun Dhishqyaun is also special since Aditya sings just like his father Udit Narayan has done right through his career.
Osman Mir gets a bigger deal for himself in the traditional track Mor Bani Thanghat Kare. A beautiful number which has an addictive quality about it, this one also has Aditi Paul (heard earlier in Ang Laga De) going perky with her rendition. A Gujarati number, it is wonderfully paced, arranged, sung and presented, all of which ensures that you are hooked on to it and want to give it another hearing soon after it is through. Expect the song to make a very good impact when it plays on screen.
There is subtlety that comes back into the proceedings though with Shreya Ghoshal returning with Dhoop. A song about realisation of love, this one is centred entirely on the female protagonist who gets all poetic.
Finally arrives the flagship track Tattad Tattad sung by Aditya Narayan. The song also marks the introduction of Ranveer Singh in the film. Just like Ishqyaun Dhishqyaun, this too is set in the Lakshmikant-Pyaarelal mode and one can comfortably state that Bhansali gets the essence of the veteran composer duo perfectly right. Of course in the middle of it all, he also includes certain Gujarati ingredients to give the song an edge.
With just about everything working for the music of Ram Lela, what with classical, folk, fusion as well as contemporary sound finding their place under the sun, Bhansali makes sure that the soundtrack stands out from the clutter of some below average music of some notable biggies that have been making the rounds.
Rediff Rating: 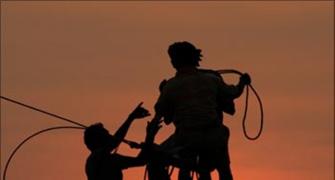 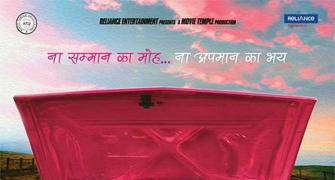 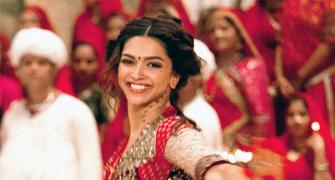 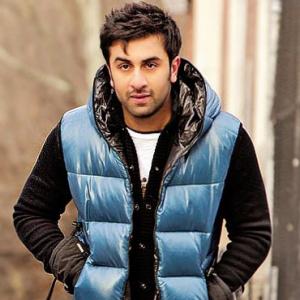