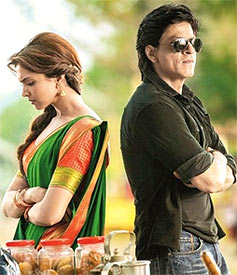 Shah Rukh Khan yelps and squeaks and shrieks and bares fangs and pouts and, well, exhausts himself overcompensating at every step, despite nobody else in the film following this template.

Six years ago, Deepika Padukone made a celebrated debut opposite Shah Rukh Khan in a rollicking entertainer Om Shanti Om, that marvellously spoofed his stardom. At the time, her acting inabilities were cannily masked by the director giving her little to do except look staggering, and by Khan himself, carrying the film on the muscles of his tremendous charisma.

Chennai Express is, in a way, full circle for that very lady as she — enervated by box-office success and increasingly self-aware as an actress — holds up her end of the film far better, and more consistently than her leading man. She makes an effort; he makes faces. And he’s never seemed more at sea.

Rohit Shetty’s Chennai Express is a curious beast, a film it seemed would lampoon the South Indian blockbuster — those films we claim are cheesier and sillier than our own (and then remake with much fanfare) — but happens to be, in fact, the diametric opposite. This is, in many ways, a full-throated tribute, a Sun TV Strikes Back statement of a film, where a typically cliched example of Southern style masala chugs along normally (and unironically) but is disrupted by a Bollywood actor who has no business there. Khan’s Rahul plays the freak while the locals around him look at him dazed, befuddled by his buffoonery.

All the other actors in this enterprise, despite their one-note roles, conform to the universe of this film, to its reality, but Khan’s having nothing of it. He performs in an inexplicably bizarre pitch, as if the filmmakers (and himself, the producer) decided that he should play it like a rejected 40s cartoon, like Daffy Duck gone awry. Khan yelps and squeaks and shrieks and bares fangs and pouts and, well, exhausts himself overcompensating at every step, despite nobody else in the film following this template so inanely animated it’d make Jim Carrey think twice. A looney out of tune, then.

It’s a shame because Chennai Express is built on a simple enough bit of fluff, something that would truly have sparkled brightly in the hands of, say, an Imtiaz Ali, but something that would itself have been inherently more entertaining had Khan not been intent on looking an imbecile. In sum: Rahul, entrusted with his grandfather’s ashes to be immersed down south, decides instead to hotfoot it to Goa and party with friends who have “arranged” NRI girls. He gets on to a train to throw his sweet, unsuspecting grandmother off his scent, and it is here he runs into Padukone’s Meena, a pretty girl with an accent thicker than Mehmood. She’s being kidnapped, he tries to speak up, and they’re both frogmarched down to her village where her gangster father is told that our hero is her daughter’s suitor. There, see? Simple, fun and the ensuing hijinks pretty much write themselves. Even with a few too many airborne jeeps, this could have been a daftly enjoyable lark. (But alas, we underestimate the power of a common Khan.)

Padukone, as said, pulls off her bit with panache. So confident is she that even her outlandish accent seems normal after a bit, and she commits to the role most enthusiastically. I’d comment on her comic timing if this film had any well-written gags, but by herself (and especially in comparison to her hero here) Padukone is a delight. She’s visibly having a blast and her glee is infectious. She delivers a Bachchan line with elan, and is particularly awesome in a scene where — in a nod to the southern horror cliche — she’s casually possessed by a ghost. This may not be the most demanding of roles, but the actress revels in the madness around her and shines through like a bonafide star.

The first half of the film, with Khan monkeying about unfettered, is relentlessly awful. (Somebody confiscate his Steve McQueen t-shirt.) It is also ear-splittingly loud, with everyone seemingly yelling and the background score choosing not to background itself very much after all. The writing is bad enough to make a Priyadarshan film look subtle. In the second half, things get less asinine — this is directly in proportion to Khan shutting up for a stretch — but then the film takes turns rolling through many a overused filmi cliche without ever managing to spoof them. Shah Rukh goes from being Daffy Duck to Ram Jaane, suddenly all melodramatic and quivery-voiced and so damned earnest that his character forgets that he doesn’t know a word of Tamil, climactically rattling off complicated lines in the language.

There is one genuinely clever moment in the film. It is the one bit of self-referencing that works, when Shah Rukh — with the Dilwale Dulhaniya Le Jaayenge music playing — stretches out his arm and yanks Deepika onto a moving train, before doing the same, complete with music, for each of the gigantic kidnappers chasing her. Super. For the rest of the film, Rohit Shetty made me feel more like a lovelorn Kajol than anybody should, and it had nothing to do with Simran: but damn, I missed Ajay Devgn.

Get notified as soon as our Movie Reviews are out!
Raja Sen in Mumbai
Related News: Rohit Shetty, YOUR, Jim Carrey, Ajay Devgn, Khanrsquo
SHARE THIS STORYCOMMENT
Print this article 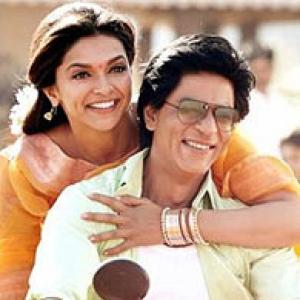 Review: Chennai Express is a rollicking trip to nowhere! 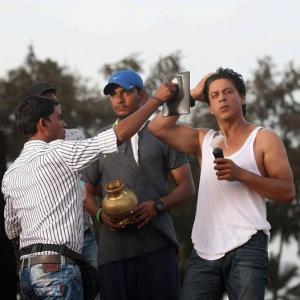