By Aseem Chhabra
September 29, 2006 15:19 IST
On the night of August 30 1997, Princess Diana dined at the Ritz Hotel in Paris with her then love interest, the English department store Harrod heir Dodi Al Fayed. The media and paparazzi photographers were standing outside the hotel waiting to catch a glimpse of the couple. The two left the hotel from the back entrance, hoping to avoid the media frenzy. But a handful of overzealous photographers were waiting for them at the back of the hotel.

As Diana and Fayed drove off in their Mercedes, the aggressive paparazzi followed them on motorcycles. The ensuing car chase resulted in a devastating accident inside a tunnel under the Place de l'Alma in the centre of Paris. Fayed and the driver died on the scene, while Diana was declared dead a couple of hours later in a French hospital.

In his stunning new film, The Queen, director Stephen Frears captures the last minutes before the accident, as if we are watching a James Bond thriller. With loud, heart pounding music and quick editing, it is an exhilarating, edge-of-the-seat scene, even though we know it is going to end in a terrible tragedy.

Diana's sudden death stunned her fans across the globe. And within hours of the breaking news, fans started gathering outside the Buckingham Palace in London. The outpouring of emotions, crowds crying, lighting candles, the images of the sea of flowers that were left outside the palace and finally the funeral, are still imbedded in our mind.

But there is another story about the week leading to Diana's official funeral, which brought dignitaries from the world of entertainment and other celebrities to Westminster Abbey.

The Queen, which opens the 44th New York Film Festival on Friday, September 29 and then in theatres on Saturday, looks at Diana's death from the perspective of the British royal family -- Queen Elizabeth (played in wickedly delicious style by Helen Mirren), her husband Prince Philip, her mother, Prince Charles and his two sons, who were holed up in their private retreat in Balmoral, Scotland, treating the princess' death as a private family matter. 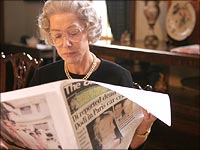 The film also looks at the tragedy from the eyes of Britain's newly elected prime minister, a young Tony Blair (played by very likeable British actor Michael Sheen), who with his subtle and charming persuasive powers manages to convince the queen to show her grief publicly and mingle with the people who have gathered outside the Buckingham Palace. The monarchy's future is at stake, Blair says, as one in four citizens wants the Queen to abdicate her throne.

Frears started his career with several cutting edge British films of the 1980s and 1990s -- My Beautiful Launderette, Sammie And Rosie Get Laid (both scripted by Hanif Kureishi), Prick Up Your Ears (about the tragic gay relationship between playwrights Joe Orton and Kenneth Halliwell), The Snapper and The Van (the last two based on novels and scripts by Irish author Roddy Doyle). He had a few misses when he stepped into Hollywood territory with duds like Hero (with Dustin Hoffman at his worst) and Mary Reilly (with a very boring Julia Roberts).

With The Queen, brilliantly written by Peter Morgan (who also scripted this fall's critically acclaimed The Last King Of Scotland) Frears is back in top form. This is British cinema at its best -- funny, satirical, topical (all the key players in the film, except, of course for Diana, are still alive) and very moving too. Watching the outpouring of emotions in days following Diana's death, and leading to her funeral -- a mixture of documentary footage and re-enactment of the scenes -- is bound to move even jaded viewers.

What sets The Queen apart from the numerous documentaries on Diana's life and death is that it gives us glimpse into the world of the royal family and the very middle class existence of the Blair household. Queen Elizabeth, refusing to believe that the public outpouring of grief has any significance, spends her days taking advice from her mother (Sylvia Sims) and her husband (a hilarious James Cromwell, plays Prince Philip -- a man completely out-of-touch with reality).

Prince Charles is very ineffective in making sense to his parents. They instead spend days and nights watching television reports and hunting -- Prince Philip tries to distract Diana's sons by taking them hunting -- while Queen Elizabeth drives her Land Rover in secluded areas of the estate.

Meanwhile, the Blair residence at 10 Downing Street is a world of ordered confusion -- three young kids, toys littered on the floor, the prime minister's wife -- Cherie (a delightful Helen McCrory) cooking breakfast, while major national and international decisions being made in adjoining rooms.

The Queen is Mirren's film. For long, this British actor has charmed us with her unique screen presence -- from the Long Good Friday, Cal, The Cook, The Thief, His Wife and Her Lover and The Madness of King George, which earned her a best supporting actress Academy Award nomination. As Queen Elizabeth, Mirren is fantastic -- a woman desperately holding on to her family (and she does not consider Diana a part of the family) and tradition for the future of her children, grandchildren and for her country.

It is an Oscar worthy performance and Mirren greatly deserves the honour for 2006. Her one threat could be Penelope Cruz in Pedro Almodovar's Volver, which is also showing at the New York Film Festival.

But finally The Queen is a film for Diana and her memory. Nine years after her death, Frears' bold film brings to the light the fact that Diana, with her beauty, grace and compassion, still holds a special position in our minds and our hearts. Although we see Diana only in documentary footage and file photographs, her presence makes the The Queen a very rich film.