Lazing around and wasting other people's hard-earned money can be quite an art. And this, sadly, seems to be the all-important message that director Sofia Coppola is trying to impress upon young girls in this money-obsessed-and-luxurious-living age of ours.

Marie Antoinette is not the complete story of one of French history's most controversial ladies in history. During her time, the shrewd revolutionary leaders painted her as an evil, sex-crazy devil cocooned in luxury while the rest of her countrymen lived in abject poverty.

Many myths flourished, and some survived to this day, though notable historians have corrected the books.

Coppola has merely pulled out a few glamorous pages from a factual biography by Antonia Fraser, and translated it to the screen. No great thoughts of her own, no depth, no great beginning, or middle or end; just one very long film that has nothing significant to say, and is poised like the blade of a guillotine in mid air. And this from an Oscar-winning writer of an original screenplay!

The film begins with a 14-year old Marie A (Kirsten Dunst), daughter of Austria's empress, being married off to the French Dauphin, Louis XI (Jason Schwartzman), in an effort to forge a Franco-Austrian alliance. In France, she is stripped naked in full view of the French court, to rid her of her foreign clothes... and origins. 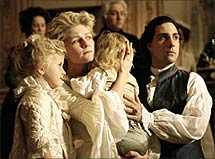 The makeup department, if one indeed did exist, hasn't done any justice to their art. The couple in real life is in their mid-twenties, and throughout the film they remain so; with no stretch of the imagination do they at any point in time look like 14-year-olds or 34-year-olds. Perhaps, an alternative could have been using teenagers in the main roles and aging them gradually.

The actors appear to have done exactly what the director expected of them: Louis XVI maintains an imbecile and Maria a chirpy-bird look throughout the film. While the real-life Marie A had a fashion house full of attitude and carried herself with great dignity all the way to the guillotine, her reel-life version is excessively happy with no trace of royal charisma.

Ever cool and composed, not even the sounds of impending doom will extract the emotion of fear from either of the actors.

Their behavior (or non-behavior) in the bedroom scenes, far from being realistic, is a cheap thrill comedy endeavouring to wake up the sleepy audience. For the first seven years in real life, and one agonising whole hour in reel time, nothing happens apart from cake eating, fashion frills splurging, and frantic calls from Marie A's mother, reminding her that as long as she doesn't produce an heir, her place in France is very unstable.

Louis on his part is happy with his food, wine, and hunting. Until, one fine morning, he gets a sermon, and decides, well, okay, let's have sex and a baby.

So, in a span of three screen shots lasting around 10 seconds, there's a result: Louis literally jumps on top of the lady; the lady rolls on the grass, laughing, while the church bell rings; and then, she gives birth while the French court looks on agreeably.

Hats off to the EP, Francis-Ford C, and the producers, Ross Katz and Coppola herself for effectively controlling the line. Sweep-and-spectacle is apparently not Coppola's style, so intelligent ideas have been employed to avoid extravagant shots, proving that, creatively, it is possible to turn any script into a film, irrespective of the budget.

In fact, no sets were constructed. Instead, we get to see the fairytale bedchamber, Hall of Mirrors, gardens, palace, and farmhouse in which Marie A lived the dream. Everything takes place as is --  true to the low-budget filmmaking style.

The exteriors are pretty nice -- the streak of golden light glittering in the water, the blue-lit twilight, Marie A walking up the palatial steps, but these are few.

One particularly effective composition: view of a battlefield, showing artillery and wounded soldiers, and a guy atop a restless horse, to breathe life and movement. Another: Marie A throws opens a palace window, and watches from a safe distance the standing crowd with lighted torches, yelling for her neck. 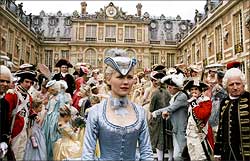 Again, rather than using extras to show the furious mob that manages to gain direct access to her bedroom, powerful sound-over is used while a half-naked Marie A flees. A moment later, we see the vandalised bedroom. Sad to say, while the technique is fine, the art directing, or the lack of it, is quite apparent.

In reality, it is said, that the queen's bedroom after the attack resembled a horror chamber. On screen, all that is shown is a ripped-apart bed, a broken chandelier, and some other overturned furniture, giving the impression that some drunkards had a minor brawl.

Quite a large piece of the budget has been allocated to designing/creating original costumes, which could easily have been hired; however, each time Coppola recalls the film's Oscar award for best costume, she would perhaps feel vindicated.

Strangely, though this is a period Franco-Austrian picture, complete with period location and costumes, the histrionics and accents are mostly British/American.

The music for the most part is also period, but oddly, the director chose to have a couple of modern rock tracks, including one while the fashionable French nobles are having a grand ball! What could have been an innovative idea had the music been consistently modern, jars loudly.

All in all, this looks like an American high school drama staged in Marie A's French quarters for teenage girls.