When Transporter director Louis Letterier brought him the script to The Incredible Hulk, Norton, alarmed after Ang Lee's desperately pretentious 2003 take on the character -- and perhaps still smarting at not being cast the first time around despite expressing interest -- turned it down. Before, that is, deciding to rewrite the script and create the character the way he saw fit.

Resultantly, Norton -- who once directed the smile-provoking Keeping The Faith -- does passably on the summer blockbuster report card, coming up with a predictable, cheesy, and 'typical' superhero movie in every sense of the word. Financiers would approvingly call the film a 'safe' project. Norton's own character, however, that of Bruce Banner who turns into The Hulk, sees the fine actor overshadowed so completely by the baddie that it's embarrassing. 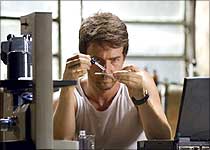 Perhaps the problem with actors like Norton and Eric Bana -- who played the green grumbler in Ver 1.Lee -- is that they are too nuanced, too clearly cerebral to slide under green skin, to get into the Hulk's essentially neanderthal character. The only one to get the tone just right was Sledgehammer director Bill Bixby, who played Banner in the 70's TV show. Edward Norton, in trying to move away from Bruce Banner's geeky weakling persona, almost turns him into Jason Bourne [even as Letterier turns the film into one long, kinetically effective chase sequence]. And a Bourne-again Hulk doesn't cut the mustard, sorry.

Meanwhile, there is something oddly irresistible about Tim Roth. He plays the most unsavoury of characters with utterly despicable glee, believably enough to be loathed, and yet, we want him to win -- despite ourselves. We want his snitch to wangle a drug lie so convincing our favourite bad guys buy it; we want his crummy thief to be able to successfully stick up an eatery despite two of the coolest gangsters in celluloid history present there mid-bite; and when his letcherous ex-convict makes a bid for poor little Ed Norton's fiancee [indeed], we want him to kiss her hard.

Here, he plays Emile Blonsky, a bloodthirsty Russia-born British marine [the way he says 'softball' is truly precious] who wants to be as gruesome as The Hulk to defeat him. He eventually turns into what the comics -- and Tim Blake Nelson's superbly enthusiastic mad scientist -- call The Abomination, a monster setting up the stage for a King Kong Vs Godzilla climax that takes its own sweet time coming. By the time the hideous Abomination slithers repulsively alive, we're pretty much sold on Blonsky. Tim Roth's eyes do more in any one scene than the rest of the actors on board this blockbustery raft. Awesome, but in a film where characters call themselves Mr Green and Mr Blue, I just wish Roth had worn an Orange tee for one scene -- for old masterpiece's sake. 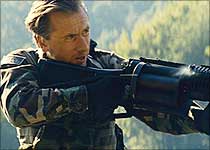 The film tells the Hulk's origin story in flashback, rather efficiently sprinting from that tragic accident story [over the opening credits] to the present day where Banner is bottling cola and trying to master his rage. Counting to ten doesn't quite cut it, and poor old Marvel mastermind Stan Lee realises that no matter what the adverts say, drinking cola isn't good for you. Then, as said, the whole film moves into chase mood, and -- save for some breathtaking shots of Rio -- there's nothing much to write home about.

Then again, on the other side of the coin, despite the lack of memorability, there's nothing to really complain

about either. The film clearly aims at audiences wanting to devote as much intellect to the screen as the Hulk would to Scrabble [Trippple. Word. Score?? Hulk. Angry!] and it's a relatively quick romp through the predictable fences as General Thaddeus Ross [a relatively bored William Hurt] tries to hunt down Banner to harness superhero-juice to create a mad green army. Honestly, gamma rays might be old hat now, but it's irksome just how much instant potency these super-serums contain, how accessibly they turn you into a Hulk-a-like. Anyway, all in the name of masala.

Liv Tyler, far ampler of frame than when she could gloriously bend around a stripping pole for her dad's music video, plays the General's daughter, Betty. The most important woman in Bruce's life here seems relatively clueless and mostly shellshocked, showing no sign of scientific curiosity while she goggles slackjawed through the film -- presumably trying her best stoned-Cate-Blanchett impression. Again, no dice. 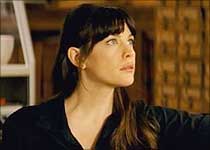 So yeah, the leading pair don't really work -- even though I hate saying that about the massively talented Norton. Neither does the hackneyed -- albeit economical script -- especially the dialogue, which routinely over-writes itself: Ty Burrell [playing Betty's boyfriend, and future sequel supervillain, watch out] says, perfectly adequately, as he glares at General Ross, that he can tell when someone is lying. 'And I know you are,' he then proceeds to immediately spell out. 'I used to wonder why she never talks about you,' he jibes as Ross thunders away, before forcing in a 'Now I know' as if you hadn't realised. GRRAH. Audience-over-the-age-of-seven mad.

What does click? Well, the effects for one. Hulk looks like he should, not ludicrously bright green or Kong-like massive, which is always a plus. And he moves with savage animal ferocity yet grace, nicely turning a cop car into sparring mitts. Also, there are a few deft comic touches through the film, like Norton asking for 'stretch-ee' pants at a flea market -- to try and cover up the eternal 'why don't the Hulk's pants rip off too?' loophole. Original 70s Hulk Lou Ferrigno plays a security guard [and makes the grunting sounds for Hulk '08], a fine nod. Particularly pleasing also is a sobriety clock, a Days-Without-Incident meter a la Bridget Jones Diary, used to great effect.

Letterier seems to be playing it safe by sticking to big-screen template, and this is the film which makes you realise the modern superhero movie is now completely canonising the fine work of Sam Raimi, the man making Spider-Man live up to that Amazing tag on-screen. The film has a massive Spider-Man 2 hangover, as a Marvel hero delivers pizza and characters riff smilingly about pants that could be too tight -- just shying away from actually saying the word crotch. It tries hard, but isn't honest enough to be, um, Incredible. Still, what better film to crib from than the finest superhero movie ever?

Honestly, this new film is a fun bit of absolutely meaningless fluff. The movie clearly isn't attempting to explore the Hulk's subtext -- despite what Ed Norton's been soundbyting about -- and it treats the subject matter like an utterly juvenile piece of entertainment. It could have been a potentially great superhero movie, but hell with that. If you head in to a theatre with a bunch of buddies to catch a stupidly explosive popcorn flick, you'll enjoy this one. The Hulk'd love it.

And while the film itself is mired in complete predictability, the epilogue scene -- breaking tradition by coming before the end-credits -- is a moment of comic fanboy glee. We have yet another fine actor stealing Norton's entire film's thunder with one immaculately concieved, goosepimple-raising cameo, going on to spell out a truth Marvel Comics fans have long known: Bruces do what they can, but Tony's the one with style.