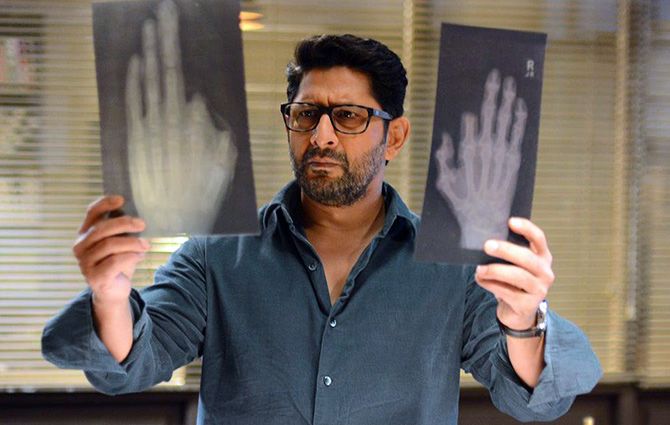 That the 'motive' in a serial killer movie must make perfect emotional sense is one of the many idiocies propagated by film scholars, and by cinephiles who see the world only in movie terms.

An act of serial killing de-universalises anybody who indulges in it. This is what makes it different from an act of organized crime.

In the finest crime films, scenes, of gangsters leading regular lives, have the effect of making their crimes seem more shocking to us (Remember how disturbed we were by the matter-of-fact way in which Clemenza in The Godfather treated both cooking and garroting?).

Humanising a psychopath does not mean explaining his actions. It means taking you really close to such a person, and to his way of life. And since, a serial killer prefers to be shrouded in absolute secrecy, how close can you get to him? He is a trope, and you don't waste your time trying to humanise tropes.

This, perhaps, explains why nobody has ever walked out of Hitchcock's Psycho proclaiming, 'I totally get Norman Bates!'

Good film-makers, when they attempt serial killer movies, work hard to make the motives of their killers as flimsy as possible; and in the best films of this category, such as Dressed to Kill, the motive strikes you almost as a parody.

The director Oni Sen and his team of writers want to establish the genius of this man (who bumps off people and quotes from Hindu scriptures), and tell you how well he has figured out the world. And this sensibility is what bothered me most about the show.

In its final episodes, Asur becomes almost a vindication of the twisted mind, saying in effect that his worldview and his philosophies carry more weight than the false façades of Civilisation and Decent Public Behaviour that we, non-serial killers, try to build around ourselves. 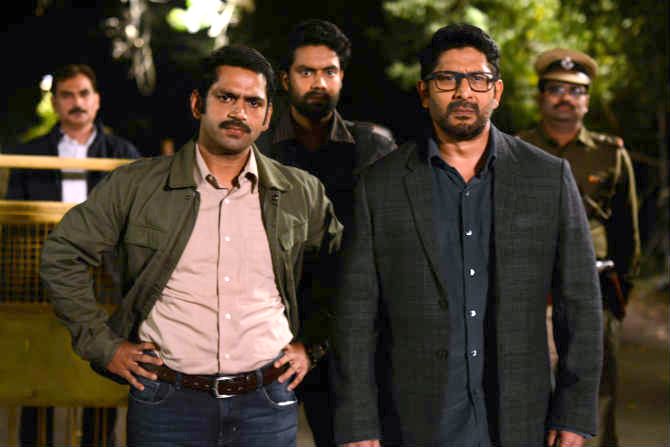 Each episode opens with a scene in Varanasi, where, amid chants, holy water, and unholy ashes, we see the genius killer being indoctrinated. He is a young boy with such bulging eyeballs that you couldn't possibly mistake him for anyone other than a psychopath-in-the-making.

The story then cuts to present day with the boy now evidently grown up, trained in matters of psychopathy, and exhaling scriptures. He is giving sleepless nights to a team of CBI officials who are failing to establish any apparent connections between the series of murders he is committing.

Since my interest in this scripture-spouting boy-killer was close to nil, I took a shine to the CBI officials. And, for a while, they do keep things interesting.

Arshad Warsi, as senior officer Dhananjay Rajput, gets to tap into aspects of his acting that he, in the past, had had to sacrifice at the altar of a punchline. You see Warsi deliberating, thinking, going over his last deduction in his head, and you see the sort of magic that is possible when a gifted actor is offered more time to lay out his cards.

Riddhi Dogra, as forensic expert Nusrat Saeed, has Jennifer Aniston's talent for conveying the divided energies of a person stuck in a delicate situation. You catch many of Aniston's tics in Dogra's acting -- she is comparable to Aniston in her expressing of that choking sensation, that feeling of the world closing in on her. And yet, to flash that blank stare, Dogra is clearly dipping into her own emptiness.

The wonderful Anupriya Goenka does not get the best-written part (there is a perpetual crankiness about her Naina Nair which bugs you), but then there's so much pleasure to be gleaned from simply watching her use her hands to conduct a conversation.

For reasons unexplained, we mistake stuff like walking angrily toward the camera with a hockey stick in hand as examples of 'physical acting'. But with actresses like Goenka and Amrita Puri, their use of their bodies is so subtle that it puts to the shame the paroxysm-laden acting of other lesser performers.

Sharib Hashmi's Lolark Dubey is a fine, simmering portrayal. Hashmi plays Lolark like a loafer initially, and lets you in on the character's resourcefulness and his intelligence, very slowly, and without any show of smarts. 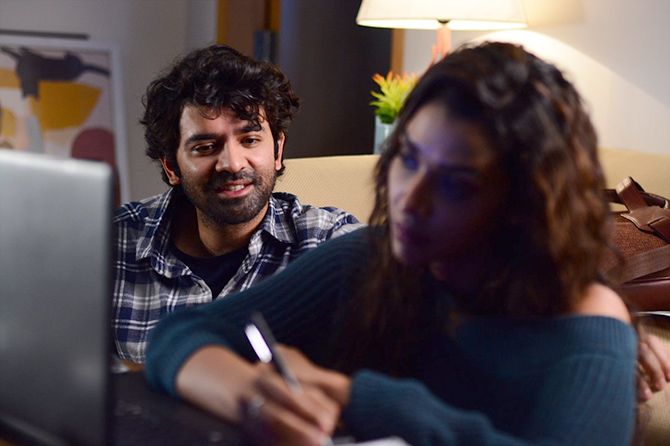 Barun Sobti, one can tell, is an actor on a very specific quest: He wants to prove he is more than just a pretty face. In fact, like Warren Beatty in the 1960s, Sobti will do anything to distract you from his face.

Here, he appears as the harrowed Nikhil Nair -- Dhananjay Rajput's colleague and rival -- and it's a performance by someone who just does not want the camera to honour him. (This complete lack of narcissism is perhaps Sobti's biggest strength).

And yet, he is an extremely fluid actor, and when mixed with his reproach of himself, Nikhil Nair acquires a loose, gangly side which is great fun to watch.

In one of the show's few bits of gliding brilliance, Nikhil excitedly cuts open a dead body and pulls out a pair of lungs using his forceps. And nobody around him flinches, not for an instant.

It is a wonderful moment, because it draws a straight line between the iciness of these law-keepers and the cold-bloodedness of the serial killer.

Episodes 2 and 3, Asur's best episodes by far, are filled with moments like the one above. These episodes, by contrasting the efficiency of the CBI officers with the chaos in the state's police machinery, keep the human scale.

Elsewhere, Asur's emphasis is confusing: The spectator may be driven to more anxiety about the serial killer not being able to carry out his next murder than about who dies.

You are shown the ingenuity of the murders, but you don't feel the violence of the loss. You don't experience the violation of humanity. You never sense that the killings have taken from us someone who had dreams, hopes, and aspirations -- someone perhaps just like us. The victims are presented as mere names to be ticked off a database.

And when Asur isn't being a cold, calculating show it feels like a show too obviously in love with its own grandiosity.

The behavioural acting does conceal this problem for a while.

However, when the forensic terminologies begin a race with the serial killer's quoting from Hindu mythology, even as bodies keep piling up, you may be left with no place to hide.

Plus, the beats of the show become so repetitive by this point that every time the camera moves closer to a face, you know the plot is about to turn. 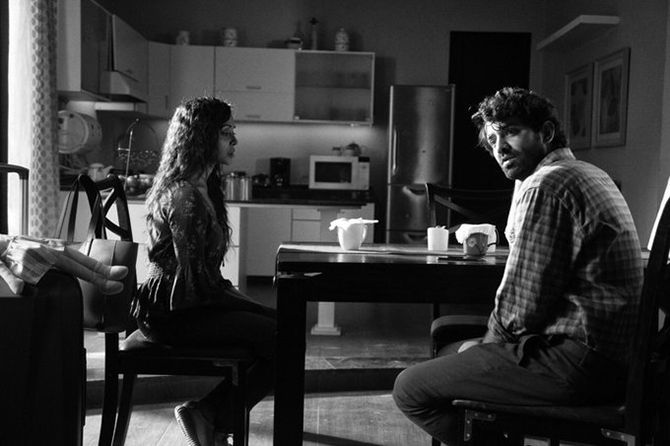 The airless direction is matched by the serial killer's portentous talking -- and his electronic monologues go on and on, into a stupor of inactivity.

If you look closely, neither the spiritual kind of art, nor the nihilistic kind, is interested in expressing more of the world. Their primary approach is to occupy a corner of the world and then expand inward. This is why, when you walk out of such efforts, you feel a little dead inside, and more lost.

I guess there is something about moving images that make them less compatible with 'theory' and 'philosophy' and more compatible with our common, tawdry, corrupt experiences.

And so, when Asur's boy-killer would get started on one of his Bhagavad Gita sermons, I couldn't wait for someone to tape his mouth and tell me a dirty joke; or throw some belly dancers around; or better even, offer me the pleasure of watching an actor louse himself up on screen. 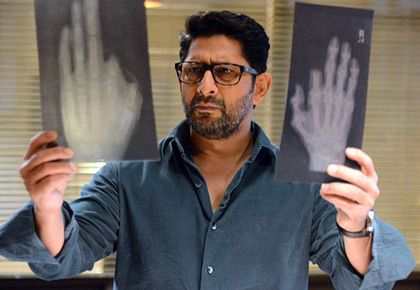 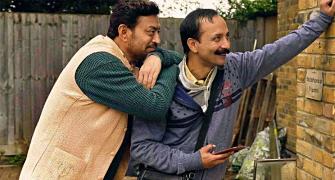 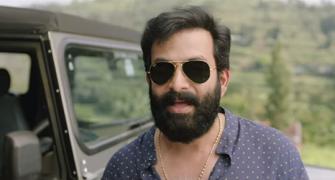 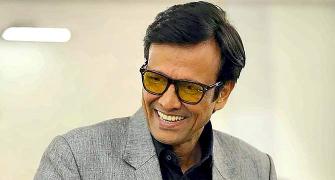 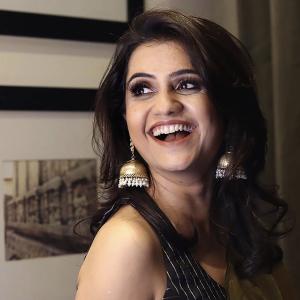