News
Business
Movies
Sports
Cricket
Get Ahead
Money Tips
Shopping
Sign in  |  Create a Rediffmail account
Rediff.com  » Movies » Will THIS man be the next Amitabh Bachchan?

Will THIS man be the next Amitabh Bachchan? 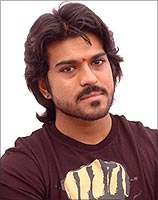 Ram Charan Teja, the lead actor of the Zanjeer remake, talks to Priyanka Sharma about stepping into Big B's boots

Years ago, when actor Ram Charan watched Prakash Mehra's Zanjeer (1973), he dreamt of emulating the pitch-perfect Amitabh Bachchan as the brooding and scrupulous cop - Inspector Vijay Khanna. Charan remembers acting out the film's unforgettable dialogues such as "kuch aadmiyon ki kamzori imaandaari hoti hai (For some men, their honesty is their weakness)."

Life, it seems, has come full circle. Next year, Charan will be appearing in his maiden Bollywood film, the remake of Zanjeer, directed by Apoorva Lakhia. Being shot simultaneously in Hindi and Telugu at the moment, the film also stars Priyanka Chopra as Mala (played in the original by Jaya Bachchan) and Arjun Rampal who will be reprising the role of the classic villain with a good heart, Sher Khan (played by Pran).

He might be nervous while shooting his first Hindi film, but Charan is no stranger to cinema. Son of Telugu superstar and politician Chiranjeevi and the grandson of veteran comedian Allu Rama Lingaiah, Charan has several Telugu hits to his name such as Magadheera (2009) which won him the Best Actor award at the 56th Filmfare Awards (South) the same year. He is still riding high on the success of his recent Telugu blockbuster, Rachcha (2012).

But, Zanjeer, he admits, is a different ballgame altogether. "Though I have danced to Dad's songs in several of my movies, playing Mr Bachchan's role is a pretty big deal!" Both Bachchan and Chiranjeevi have read the new script and given their blessings, says Charan. "I understand I have big shoes to fill," says the 27-year-old actor. Shuttling between dance rehearsals and training sessions with his fitness instructor, Charan is difficult to pin down. "But I am trying to do justice to every scene," he says passionately.

Under Lakhia's direction - he received critical acclaim for Shootout at Lokhandwala (2007) - Charan has already wrapped up the first schedule of the film after shooting for 15 days. Having only shot his own scenes, Charan is yet to begin shooting with his co-stars.

There's one small hurdle that he's facing, though - his Telugu accent. "Which is why I have a language and accent coach with me on the sets all the time." While Charan manages to wrap up the Telugu version of the scenes in one take, he confesses the scenes in Hindi require around four takes. "Apoorva (Lakhia) is a clever director and makes me enact the Hindi scenes first," he laughs. "It boosts my confidence."

But the actor understands the nuances of Hindi perfectly. "I was born in Hyderabad... you can't survive in that city unless you understand Hindi!"

While the original Zanjeer depicted a young, lanky Bachchan fighting the bad guys with his volatile temper, which earned him the moniker of "the angry young man" thereafter, Charan is working hard to develop a chiselled, muscular frame and has been undergoing strenuous physical training for months. Another reason for the rigorous training is that Lakhia has convinced him to take his shirt off in a few scenes.

"This is the first time I will be playing a cop," says Charan. And his Vijay Khanna, he promises, will be as gritty and powerful as the original. 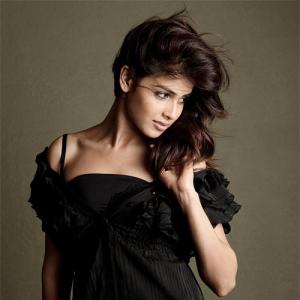 Genelia: Nothing has changed after marriage 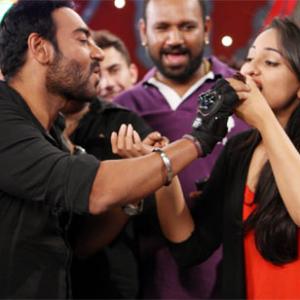