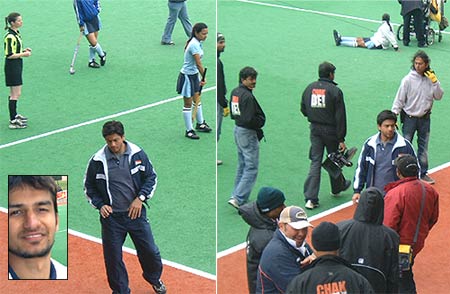 Reader Lovenish Batra (inset) sent us some exclusive pictures of Shah Rukh Khan, on the sets of his new film, Chak De India, in Melbourne, Australia.

The actor plays a hockey coach for a girls' team. A young Sikh girl (played by Vidya Malvade, seen earlier in Vikram Bhatt's Inteha) wants to join the team but does not get her parents' approval. Bend It Like Beckham, anyone?

The film is directed by Shimit Amin (who earlier directed Nana Patekar in Ab Tak Chhappan) and produced by Yash Chopra.

If you encounter/meet/see film or television personalities and photograph them, please scan the photographs and

mail the pictures to us. We will feature the best images right here on Rediff Movies.