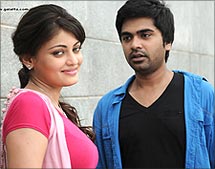 "What kind of a life is this," murmurs the protagonist, Cable Raja's character, throughout the movie, at appropriate times. The phrase holds good for the various situations he finds himself in, along with other characters who undergo certain life-changing moments, themselves.

That's the general theme of Cloud Nine Movies' and R S Infotainment's Vaanam (Sky), the Tamil version of the Telugu hit Vedham. This version too has been directed by Krish, and manages to incorporate most of what made the Telugu version an acclaimed hit.

For starters, you have a wannabe rock star Bharath (Bharath), in Bengaluru, who kicks off proceedings with his group (including girlfriend Vega) with the high-voltage Who Am I? Turns out his mother doesn't like the idea of her son wasting his life; she wants him to go into the army like his father did. Naturally, Bharath resists the idea, gains a live gig in Chennai and sets off.

Then there's Saroja (Anushka), in Sulurpet, the Tamil Nadu-Andhra border, working her way as a sex-worker in a brothel, seeking a way out desperately. She wears bright red lipstick, revealing sarees and makes her escape with a friend as quickly as she can.

Meantime, there's a withered mother (Saranya) and her father, trying desperately to save her son from the clutches of a moneylender in Thoothukkudi. Working in the unforgiving uppalams, she comes to Chennai to gather funds by selling her kidney.

In Coimbatore, you have Rahim (Prakashraj), a devout Muslim whose wife (Sonia Agarwal) has just been told that she's pregnant. Rahim learns that his long-lost brother has just been sighted in Chennai, and sets off hotfoot.

And last, but certainly not the least, you've got Cable Raja (Simbhu) in Chennai, a happy-go-lucky cable guy who makes a rollicking entrance worthy of his status and his character. Together with his friend Seenu (Santhanam), Raja roams the streets, connects cables and is also desperate to make money, so he can gain passes for a certain premier event. His girlfriend Priya (Jasmine) is stinking rich, and the only way to gain her family's consent is to play the rich boyfriend himself.

The journey of each of these protagonists is interesting enough in the beginning, largely because there's a sense of suspense about where they're going to end up. Until the interval, the pace keeps up, but later it begins to drag. Some sequences seem forced and convoluted. You're left wondering where exactly it's all going, and there are large doses of melodrama that rob the realistic effect. It all ties together in the last few minutes though. The end, set to the melodious Vaanam, does move you a little.

Fans of STR, as he's styled these days had better be warned, though. This is a film with an ensemble cast, so STR is not, technically the "hero"; he's part of a large set-up, each with his or her own part to play. STR's character, though, is possibly the most defined of the lot. He has understood both the comedic and dramatic possibilities, and played the role well.

Santhanam, though, with his timely one-liners, easily carries half the load and walks way with plenty of appluase, while VTV Ganesh too contributes his bit.

Considering all the hype, Anushka's role isn't all that scintillating, although she certainly adds to the oomph factor.

Bharath does his bit, while Prakashraj is largely his own self.

The production values are, naturally, excellent. Nirav Shah and Gnanasekaran's camera-work carries you through every frame with practiced ease; Anthony's editing works in certain phases, but the lagging parts don't seem to be his problem, but the script's.

Yuvan's music shines in the Vaanam song, a soothing, tear-jerking melody, more than Evandi Unnai Pethan, which is largely a showcase for STR's image.

Krish's story has a lot of plus, and some good performances going for it. If you ignore the minor lapses, you've got a reasonably engaging story, and a moving climax. 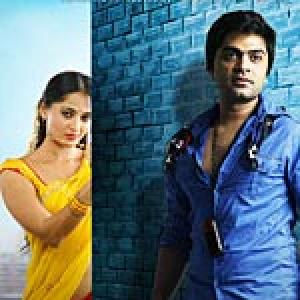