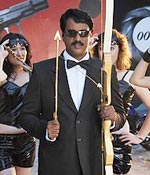 Ram Gopal Varma's Telugu film Katha Screenplay Darshakatvam Appalraju (KSD Appalraju) comes after a gap of many years. However, this much touted and publicised film of his doesn't live up to the hype.

The film, which deals with the travails and anguish of a filmmaker (here Appalraju) -- a worthy subject -- starts off well but peters out towards the end.

Appalraju (Sunil) from Amalapuram dreams of becoming a filmmaker. He goes to Hyderabad to fulfill his dreams. Once there, he runs into producer Raakhi (Raghu Babu) and creative director Pushpanand (Harshvardhan) and narrates a script of Nayaki. They suggest changes along the way as they sign the heroine, hero Babu (Adarsh) first and Ajay later.

Raakhi approaches a don Srisailam Anna (Brahmanandam) to finance his project. The don bulldozes them into being the lyricist for the film.The hero, KT, suggests the inclusion of an item number. Appalraju has recruited four assistant directors, one of whom is Swati. Though he is not happy with the changes, he is forced to go along. There is rivalry between the hero's Babu and KT that threatens the prospects of the film. Will Appalraju finally make the film and see the title Katha Screenplay Darsakatvam Appalraju rolling on the screen?

Ram Gopal Varma shoots a fairly good first half which is filled with humour. The song on the heroes Chiranjeevi, Balakrishna, Nagarjuna, Venkatesh (shot with their body doubles) and on the directors is imaginative. Throughout the film Varma keeps criticising himself and his films through the Sunil.

After an interesting first half, we come to the second half which slows down proceedings and becomes quite a bore to watch. The humour quotient also comes down though Brahmanandam, Ali and Venu Madhav try hard to keep the momentum going. At times the film goes over the top too. The bit on the don Srisailam Anna seems to be overdone as well.

While unnecessary time is wasted on the don and his antics, not much is shown about the filmmaking. There is so much that could have been depicted to show the emotional connection. The Ravi Teja scene seemed to jut out of the film. The take on the media also seemed too lopsided. One hardly sees TV reporters interviewing people the way it was portrayed. Also, the depiction of the 'critics' was not in good light.

Though the film is an attempt to show the happenings in the industry, it was not done well. People not familiar with the industry may not 'get' what the director is trying to say.

Sunil's performance is sincere and believable. He can dance too, though one is left wondering how the dances were incorporated. Swati, again is natural and effervescent, but the role is too miniscule for an actor of her calibre. The band of comedians -- Brahmanandam (with his straight face playing the don), Venu Madhav (the gun-toting security guard of the don), MS Narayana (the senior most assistant director of Sunil who had been an assistant to the great directors of yesteryears), Ali (playing Rahman Sharma, the musician), Krishna Bhagwan (playing the corporate guy) and of course Raghu Babu playing producer Raakhi to the hilt -- have done a good job. Adarsh is effective as the villain. Ajay too makes his presence felt. Tanikella Bharani, Kota and others have also played their parts well.

Technically the film is just about okay though a little too long.

All in all, Ram Gopal Varma had a good subject but fell short in developing it. 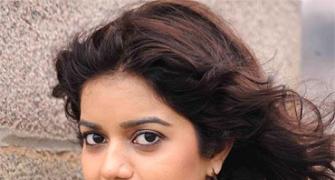 'Ram Gopal Varma is a chilled out guy' 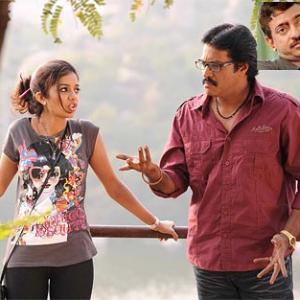 Ram Gopal Varma: I was manipulative 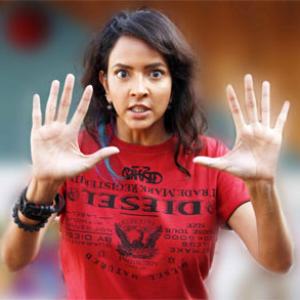