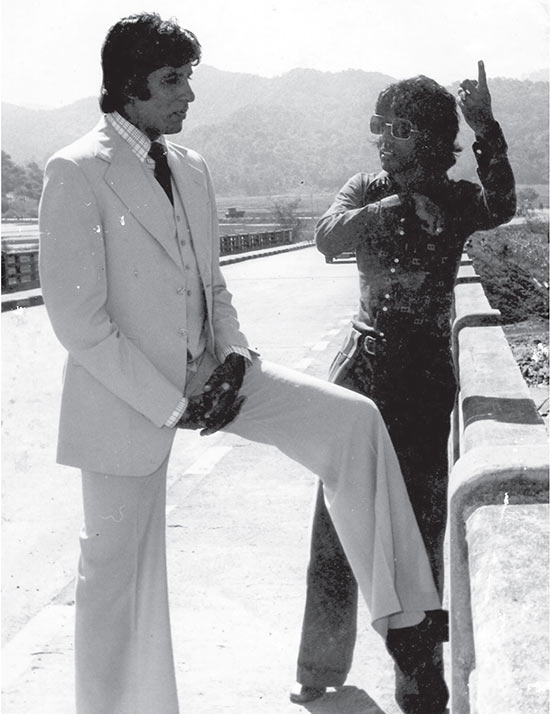 In his book The Making of Don, Krishna Gopalan recalls how one of Mumbai's most iconic structures, situated in the queen of suburbs -- Bandra -- added to the exceedingly slick action-thriller's style quotient.

We present an excerpt from the book.

The making of Don through the mind-1970s coincided with the construction of one of the city's most iconic structures.

When Sea Rock Hotel opened its doors to visitors in 1978, it marked the emergence of a landmark that the city would relate to for a decade and a half.

Bandra, already referred to as the queen of the suburbs, now had its own fancy hotel to boast of and there was no need to look towards south Mumbai for the Taj or the Oberoi.

Chandra (Barot) quite liked the way the hotel looked and it seemed ideal to shoot a couple of scenes as it was being constructed.

It had large pillars and tonnes of construction material that just lay around.

That was not all.

It had innumerable entry and exit points that were perfect for a good fight sequence.

He figured it would look even better if he could shoot at night.

Excerpted from The Making of Don by Krishna Gopalan, Rupa, with the publisher's permission, Rs 399. 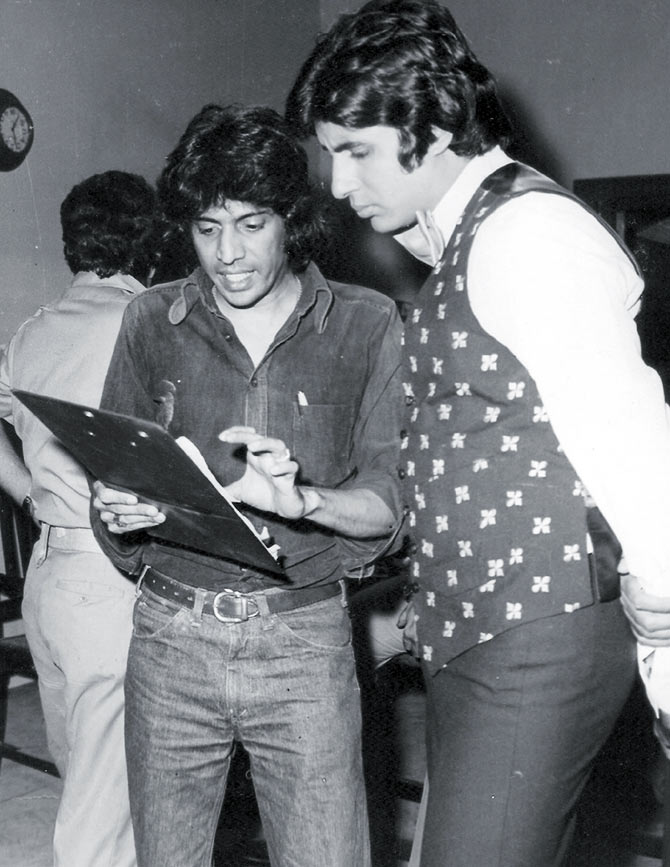 Image: Chandra Barot and Amitabh Bachchan on the sets of Don

Chandra decided that the scene where the situation of the mistaken identity was corrected had to be shot at the construction site.

Zeenat (Aman), blissfully ignorant of the street singer replacing the villain, is determined on avenging her brother Ramesh's gory death.

When she sees Vijay's memory coming back, she is clear that the time to kill him could not be more opportune.

The scene starts off with Amitabh making his way into Iftekhar's house as he adopts the rather dangerous upar se neeche (from top to bottom) method.

Till then, the gang members are still worried over their star member's recovery from his memory lapse.

He is suddenly back to being the cool, gun-toting person they were so used to seeing.

Zeenat Aman's stunt double in the movie was a he! 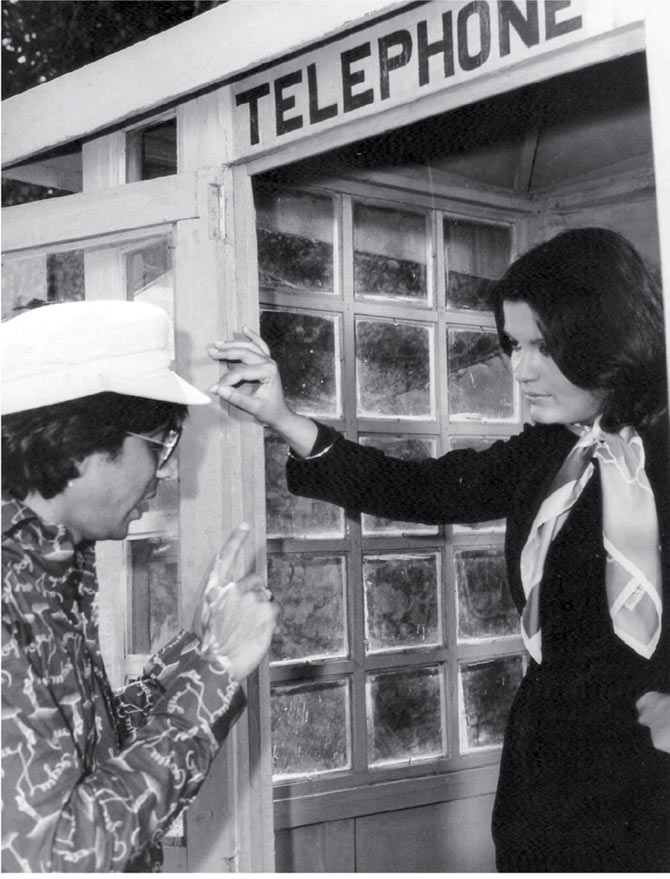 Amitabh climbing into Iftekhar's house was shot late in the night in one of Bandstand's tall structures.

It had over a dozen floors and suited Chandra's image of a classic high-rise building.

As the hero unexpectedly spots Zeenat, all hell breaks loose.

Her one-point agenda is to kill him and she draws out a sharp knife to cut the rope. The hero aimlessly falls into thin air before landing in a swimming pool. It is here where the chase begins between the two of them.

That shot was filmed in Sea Rock's parking lot.

A closer look will reveal that the lady in the frame is not always Zeenat.

When there is a bit of action involved, her place is taken over by a duplicate and he (it was not a she!) is Hussain, a professional stuntman.

Luckily, the shot in the film has Zeenat sporting a boy-cut and there was really nothing much to do on the hairdo. Hussain is seen many a time later in the film doubling up for Zeenat. 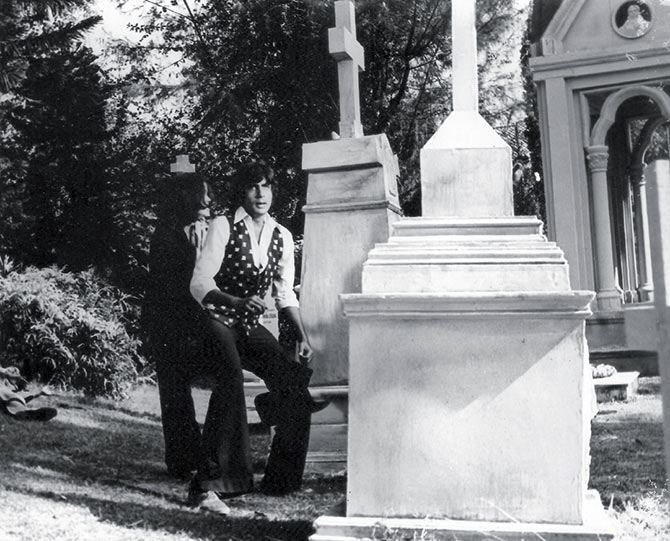 Shooting in a hotel was a good idea since it gave the film a slicker look and the stars some privacy.

Besides, a scene that required the presence of a lot of people was tailor-made for a shot in a hotel.

Sea Rock again was the preferred choice for the filming of the Main Hoon Don song.

The difference was that, unlike the fight sequence between Amitabh and Zeenat, this was to be shot indoors.

It had a dancing Amitabh whose identity is unknown to everyone in that room.

He dances energetically to a fast song that has a lot of people dressed in interesting and varied outfits.

Soon, he hits the dance floor with some women.

A prominent absentee here is Zeenat Aman and Dev Anand had no small role to play in that. 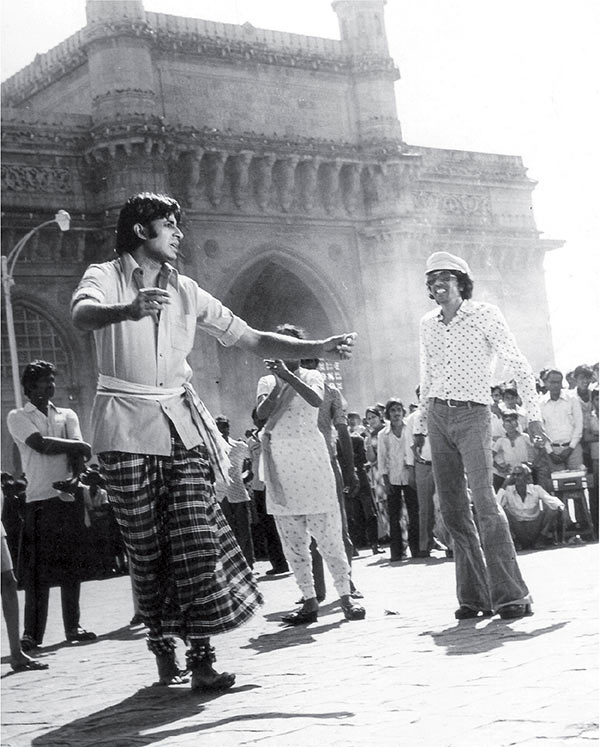 When Chandra saw the banquet hall in Sea Rock, he liked the vast space available and the cool, business look.

Perfect for a gangster-moll kind of a scene, he thought.

He was quite right and the thought that a key scene had already been filmed when the hotel was still under construction was not far from his mind.

'This film has been in the making for a while,' he said to himself in a slightly worried tone.

In fact, another important scene was shot in the hotel with Don on a staircase.

Here, he meets Zeenat for the first time and is impressed with her fighting abilities.

He utters the immortal 'Mujhe junglee billiyan pasand hain' (I like wild cats).

What goes unnoticed is that Amitabh and Zeenat are never shown together in that scene.

If the hero was in a plush hotel mouthing his dialogue, his leading lady's shot was at Mehboob Studios.

She just says 'Thank you, Don' and the two scenes were merged at the time of post-production. 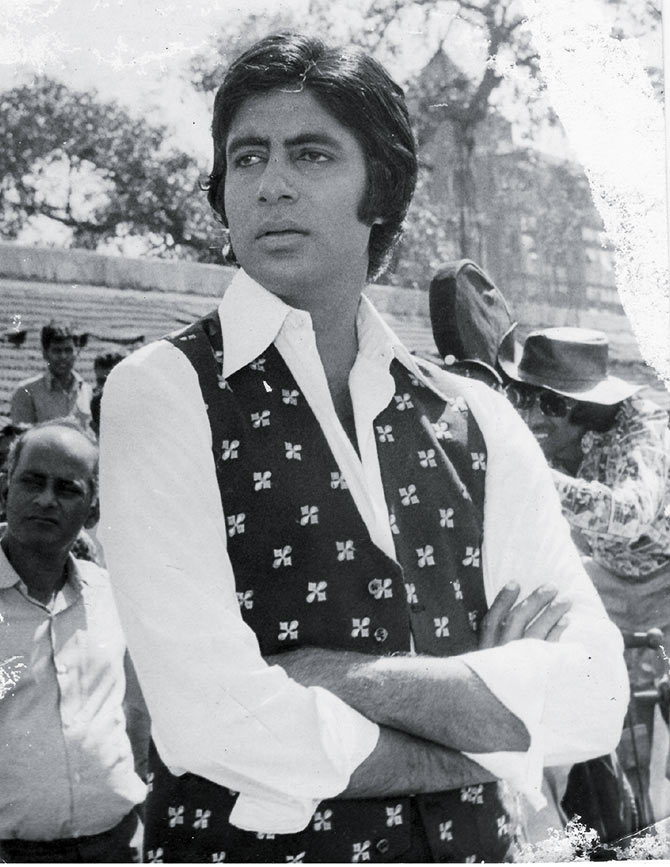 Image: Amitabh Bachchan on the sets of Don

Through the 1970s and a good part of the 1980s, Sea Rock was the five-star hotel for Bollywood.

It had a health club that was second to none with local Bandra resident, Rekha, being a regular visitor.

Rama Bans, already a name in the fitness circuit, was synonymous with the hotel and counted several stars among her clientele.

With a stunning promenade that faced the sea, the hotel was a star attraction for many years.

It had stars meeting the press for interviews in the coffee shop.

The Mumbai bomb blasts saw Sea Rock becoming one of the casualties with a significant part of the hotel destroyed.

Labour issues did not help its cause and it was razed to the ground after the Taj group acquired it.

In a few years, it would bear a new look, though to the city's taxi and auto rickshaw drivers, Sea Rock Hotel still holds a serious and meaningful emotional connect. 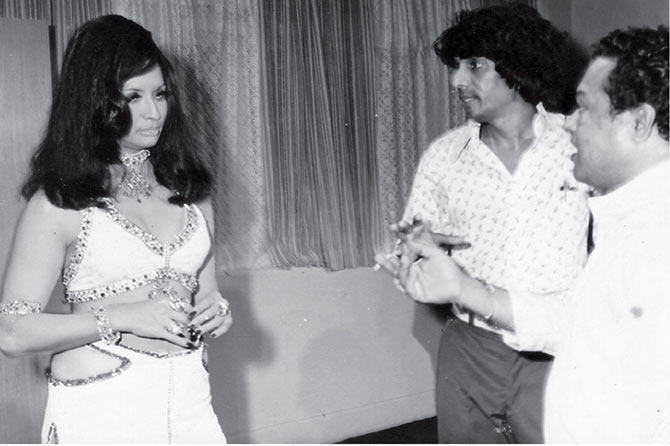 Image: Helen, Chandra and PL Raj during the shooting of Yeh Mera Dil

Like Sea Rock, Chandra shot quite extensively at Hotel Horizon, a property that faced the city's Juhu beach.

It was a smaller hotel and a perfect hangout.

It had large suites that faced the sea and though the hotel lost quite a bit of its charm later, there remain people from a bygone era who still wish they could stop by for a cup of coffee when they want to relive a bit of the past.

Sadly, the hotel has been demolished and nothing from the past remains.

It was a large suite that was chosen for the only interaction between Zeenat and her brother Ramesh.

It is the scene where she walks in with the flight tickets and begs her brother to get out of what he is doing.

The image of Ramesh, played by Sharad Kumar (also known as Jolly Sharad Kumar), holding a mug of beer and gently inhaling a cigarette as he watches the sun on the beach remains an abiding image.

Dressed in a night suit, Sharad was asked by Chandra to wear that worried and harassed look on his face.

'For the second half of the film, the script allowed for Amitabh to frolic in the pool' 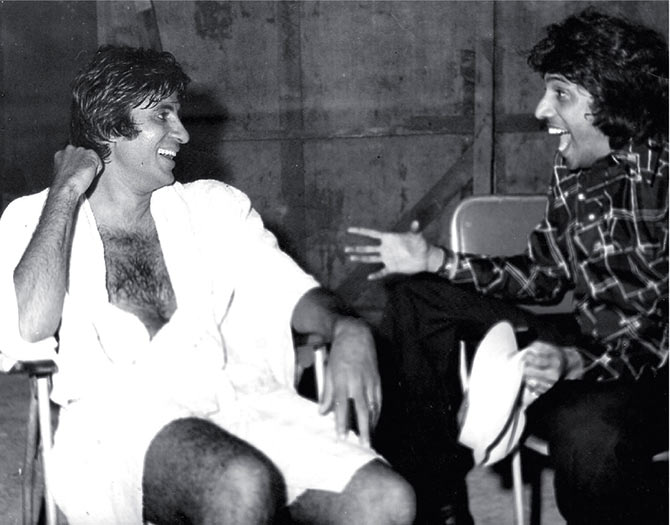 Image: Amitabh Bachchan and Chandra Barot -- this is the scene where the actor is in the sauna bath

Sharad was actually working for Air India when Don came his way.

He was recommended for the film by Chandra's brother, Pratap, who thought the young man would do well in a fleeting appearance.

The long sideburns were the result of being a huge Elvis Presley fan.

After the film, Sharad moved to Canada to seek his fortune.

He is still remembered for that cameo in Don and being the reason for the Yeh Mera Dil song.

Film lovers would recall him playing a brief role in Sholay (1975) and Joroo Ka Ghulam, a 1972 release.

Sharad also lent his voice to the Do Lafzon Ki Hai Dil Ki Kahani song from The Great Gambler.

It was large, clean and one could spend hours there. For the second half of the film, the script allowed for Amitabh to frolic in the pool with his lady.

Chandra was taken in by Horizon and knew it would be a quick sequence to wrap up.

It had the hero in the pool with Zeenat and a bit of drama then follows from Don's jilted lover who tells Macmohan (just Mac in the film) that she is convinced that there is something fishy. 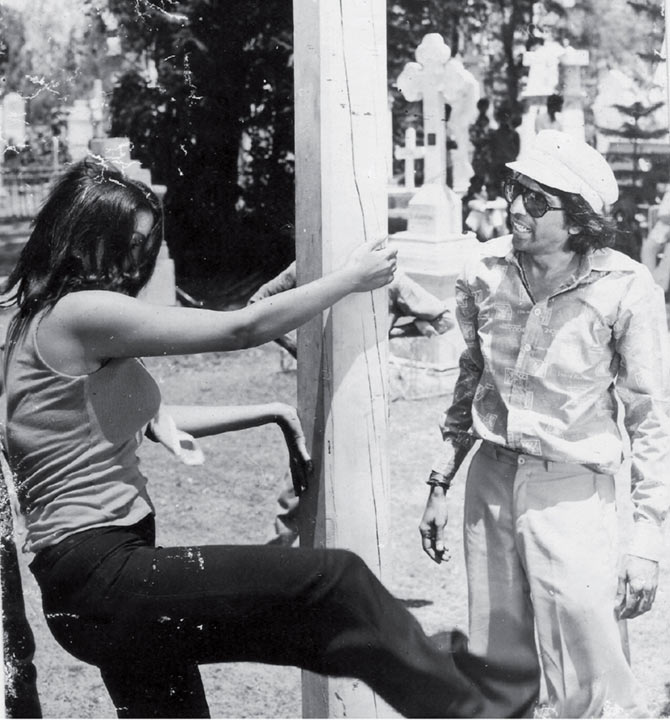 Once that shot was in the bag, Chandra and the rest of the crew were pleasantly surprised by the unexpected visit of a smart, young pilot.

Rajiv Gandhi, then with Indian Airlines, was flying on the Delhi-Mumbai route and decided to call on Amitabh.

Horizon was not terribly far from the city's domestic airport in Santacruz and Rajiv had a couple of hours to kill.

Keeping Rajiv company was his charming wife, Sonia, and their two adorable children, Rahul and Priyanka.

Lunch was served on the sets as the two kids were clearly enjoying Amit uncle's company.

Chandra had a good feeling about the film and chuckled to himself when he suddenly thought of what Nariman (Irani, producer, who passed away during the making of Don) had said to him about the need to develop his own style of direction.

He quietly watched the sea and could not take his eyes off the waves that were pounding the sand.

There was still a lot of work to be done.