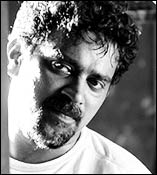 Well-known cinematographer Santosh Sivan has directed quite a few films and won several national and international awards. In fact, his film Terrorist has been described as one of the 100 best films in the world by Pulitzer-prize winning movie expert Roger Ebert. Now, for the first time, Sivan is directing a film in his mother tongue Malayalam. Anandabhadram, starring Prithviraj, Kavya Madhavan, Riya Sen, Manoj K Jayan and Kalabhavan Mani, is a fairytale.

Sivan speaks about his directorial venture, due for release this Diwali in Kerala.

You began directing Anandabhadram immediately after shooting Mistress Of Spices. Can we say that directing a film in your mother tongue is like searching for your roots?

More than searching for your roots, it is reinventing yourself or recharging. I have shot a lot of Malayalam films and two of my national awards are for Perunthachan and Kalapani. Then there was Sreekumaran Thampi's Mohiniyattam, Shaji N Karun's Vaanaprastham, etc.  I like shooting these off-beat films that are also commercial in nature. And, I always wanted to make Malayalam films.

A sneak peak into Mistress Of Spices

When I went to London to shoot Mistress of Spices, those people told me how different my style of working was. Then you realize you have in you so much of what you have learnt from Kerala, for example, watching and being a part of arts like Kathakali, Mohiniyattam, etc. All the metaphors connected with them remain in you forever. It is this background that makes you interesting to people in a place like London.

I also showed them the films I did for Kerala Tourism, and they used to ask me a lot of questions. I used to take classes for them. I used to talk about how differently light is treated in Kerala because it is always kept out. It has to always force itself in through windows and courtyards. This is totally different from how light is treated by people in London. But most people are trying to ape the west when they make films in India.

What attracted you to the story of Anandabhadram?

When I first read the story, I felt I was walking into one of the stories my grandmother used to tell me, the ones rich in tradition, folk narration and mystical elements. But this story is actually set in real times. A young man (Prithviraj) from San Francisco comes to his ancestral village for the first time in his life with his mother's ashes. He wants to light a lamp at the sacred grove, which his mother (Revathy) used to frequently light as a young girl. He slowly realises that all the stories his mother had told him were true; people of the village still believe in many things he didn't. They believe in trans-migration. I have realised that those Indians who are settled abroad are more culturally bound to India than us who live here. They want something to cling on to. There is some element of disbelief in all these things, though we have added an element of believability to the script. The film is basically about trans-migration, the good and evil.

Did you grow up listening to your own grandmother's tales?

Have you used a lot of symbols and metaphors in the film, or is it a straight narration?

Yes, I have used symbols in the film; symbols that are very local and traditional. For example, for the get-up of Digambaran played by Manoj K Jayan, a practising Tantric, I have used images from Theyyam, Kathakali, etc. All symbols used are basically from the traditional arts of Kerala. It is like revisiting old times. You see a very traditional Kerala in the film. Digambaran, the protagonist, is a very traditionally rooted character. The only difference is he is using all that for negative purposes.

You said that making this film was like reinventing yourself. Could you really do that?

I can do that whenever I go back to Kerala. I will give you an example. I used to play hockey when I was young. In the afternoons, we used to look at the sky to see if it would rain or not. At the time, I saw green becoming greener, clouds changing shapes, and light getting darker. I was not making an effort to study nature but I noticed so many things. Those images have stayed with me, intact. As I went around looking for location sites, it brought back so many memories.

Is it necessary for an artist to be nostalgic, sometimes at least, to be more creative?

For me, yes. Everything is inside you but, sometimes, you have to go back to rediscover them.

Sometimes, you enjoy this contradiction. I think that is the whole idea of filmmaking. It is good to do cinematography or make films with the basics and, sometimes, it is good to have the luxury of everything. I feel you are blessed if you can have both these worlds.

Did you enjoy making Anandabhadram more than your other films?

I enjoyed it more because I was also directing it. Directing a film in Malayalam is more in my comfort zone. Of course, every film you do, you enjoy in a certain way. Here, I would say you are working with your people and talking in your own language. I tried to bring in a kind of order, which I had picked up from English films. We could finish the film in just 44 days.