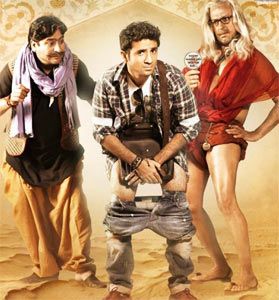 Sooper Se Ooper will not be able to make you laugh like Sidhu or Archana Puran Singh performing on their respective shows but it will make you chuckle to yourself softly at situations and the characters’ reaction to them, writes Paloma Sharma.

If adman Kitoo Ghosh’s Sooper Se Ooper were a test paper, it would be rejected out right due to the lengthy, pointless first answer -- the long-running introductory titles.

But you must absolutely not let this deter you from watching the rest of the film.

Ranvir (Vir Das) is all out of luck. He is in a tough financial situation (partly because of his greed), his shares are falling and his mother has passed away. The only way to come out of this is to sell the ancestral property in Bandra, one of Mumbai’s posh-est locations, which he inherited from his late mother. The only catch is that his mother left no will; and now the property is disputed.

Kukki Kukreja (Deepak Dobriyal), a straight-out-of-the-seventies construction contractor, who has far-reaching ambitions of being a builder, has his eye on the property which he has promised to procure for a mysterious Salim bhai.

It is then found that the property passes on to whoever is next in line in Ranvir’s mother’s generation. Hence, the only person who can solve the dispute is his mother’s brother -- his mama. Both Kukreja and Ranvir embark on a wild goose chase to find his mama, Madho Singh Rathore (Gulshan Grover), who remains untraceable.

One of the best things about Sooper Se Ooper is that it chose to bank on people with talent instead of relying on people with huge fan followings to make the film work.

Vir Das remains subtle and underplays it, but he could give the lead actors from the Rs 100 crore club a run for their money any day when it comes to screen presence.

Kirti Kulhari, who most of us known as Parminder from Khichdi: The Movie, is definitely not playing second fiddle in this venture. She commands attention and you just cannot say no. Kulhari plays a small-town girl, Gulabo (often addressed as Gul), but without all the sharam and lajja shenanigans that usually go on in more glamorous films.

Gulshan Grover stepping out of negative roles or even grey characters is a good enough reason to give Sooper Se Ooper a shot. While it would not be possible to divulge much information about Grover’s character, the elusive mamaji, it would be safe to say that he sure does break a leg.

It was wonderful to see Yashpal Sharma back on the big screen in a meatier role after a while. Technically, Sharma is a supporting actor. But if you ask me he’s a lead actor in his own right -- and I say lead actor because Sooper Se Ooper has no stars, no images built up by powerful PR machinery; it only has performers who colour that great, empty white sheet in our dark theatres with a few shades of life.

Sooper Se Ooper, despite being set in Shekhawati, rural Rajasthan, and Mumbai, does not resort or any of the stereotypical, holier-than-thou comparisons between city and countryside (which is a great relief) and instead, celebrates both life styles that have their own ups and downs.

The music remains constant throughout -- always peppy, never a boring moment. For a first-time composer, Sonu Nigam and partner Bickram Ghosh churn out funky tracks with fusion of rural and urban, of old and new, that keep your feet tapping.

But the director, Kitoo Ghosh, is the one who really runs this show. His vision for the film is strong as steel and never once does he let the story waver from its destined path.

Its beautiful how something so simple, and for a change, something so positive can turn out to be a no-brainer comedy -- as opposed to the crass, racist, misogynistic and homophobic tone found in the usual fare that appears Friday after Friday in the name of entertainment. This film has no unnecessary song sequences, suggestive dialogues, nudity or double-meaning ‘jokes’, however this does not mean that it is only for the family -- singles, couples, friends, everyone can enjoy this.

Sooper Se Ooper will not be able to make you laugh like Sidhu or Archana Puran Singh performing on their respective shows but it will make you chuckle to yourself softly at situations and the characters’ reaction to them. It will amuse you, keep you guessing and never give you a boring moment.

If you’ve liked Khosla Ka Ghosla, Challo Dilli and Do Dooni Chaar, you will love Sooper Se Ooper. This film isn’t about getting from point A to point B; it’s about enjoying the journey -- destination be damned. 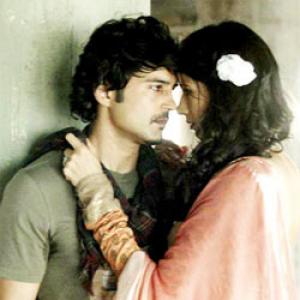