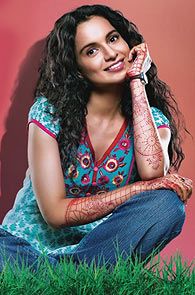 Queen is a fantastic album that delivers more than one expected, raves Joginder Tuteja.

Composer Amit Trivedi has been doing some good work over the years. His compositions for Lootera still linger in memory.

He doesn’t disappoint with the music of Kangna Ranaut-starrer Queen. He has composed eight songs (written by Anvita Dutt) for the album.

The foot tapping London Thumakda with Labh Janjua is a good start. A catchy number that is fast-paced and has a Punjabi flavour, this one has just the right mix of folk, traditional music and fusion of Indian and Western instruments.

London Thumakda is sung by the sisters Sonu and Neha Kakkar.

Amit sings Badra Bahaar. The opening notes are in the musician's trademark style, it doesn't conform to any boundaries. It's easy on the ears and can be heard in a loop.

The song that follows is a pleasant surprise. Amit belts out an eclectic mix for O Gujariya. The track could well have made it into a Dharma production, considering the kind of funky element that Karan Johar's films boast of with his set of young actors.

If Dhat Teri Ki made waves just a few weeks ago, O Gujariya is spunky enough to make it to the clubs and discotheques and rise to the top of the charts. One waits to see this Shefali Alvares and Nikhil D'Souza number promoted aggressively.

The man of the season Arijit Singh makes an appearance in the film's soundtrack with Taake Jhaake. This one isn't like Kabhi Jo Baadal or Tum Hi Ho but follows the style that Amit brings to his compositions.

The kind of build up that Amit puts together for Jugni (Queen), one is well prepared for some trademark

sound that he would bring on for rest of this four minute long piece. In fact, this rock track is interesting enough since it sets the call of liberation for the central protagonist Queen.

In fact, the song reminds one of another excellent Amit composition, Badla Nazara (English Vinglish). With Jugni, he showcases once again that one can have a title like this for a song and still not put in a single element of a Punjabi composition/lyrics.

Harjaiyaan is another example of the different, experimental, and entertaining soundtrack that has been put together for Queen. It may not be what one puts on one’s caller tune/ring tone, but it sounds just right in the totality of the soundtrack. The way Nandini Srikar sings this number it has a pahaadi feel to it and one can only applaud the choice of singer.

Mohan Kanan, who had done very well with Yaariyaan (from Love Aaj Kal) and Shikayatein (from Lootera), renders the haunting Kinare. The lyrics may have sounded heavy on paper but to his credit, Mohan renders them lightly. He brings simplicity to the narrative.

The album concludes with a two-minute piece by Rupesh Kumar Ram who makes an immediate impression with this folk outing. Raanjha is taken forward primarily on the power of vocals.

One is tempted to play Raanjha in loop for a long time before returning to the rest of the album. Expect the song to appear at multiple junctures in the film.

Queen is a fantastic album that delivers more than one expected. Different from the usual Bollywood fare, this work by Amit Trivedi and Anvita Dutt Guptan is seamless in appeal and succeeds as a total soundtrack instead of a piece or two working in isolation.