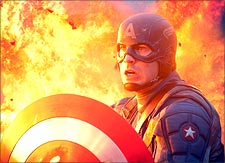 Raja Sen writes Captain America does not even try to surprise it viewer. Post YOUR review here!

If you aren't a fan of the superheroes emerging out of the Marvel Comics stables, then this might be a bad time for you, movie-goer. Because sure as Coca-Cola or Nike or Nokia, Marvel has cracked the blockbuster code.

For the next dozen years, at the very least, they are set to hammer out unspectacular but efficient summer successes, pretty much non-stop. Occasionally something special will come along, sure, and once in a while there'll be a disastrous tumble, but by and large their assembly-line should do just fine.

Captain America is merely that, sufficient and unambitious and adequate in terms of a checklist: a Marvel-by-numbers film that doesn't even try to surprise its viewer. Slavishly true to the classic comic stories, it will please fanboys dissecting morsels of loyalty, as well as audiences who want their heroes old-school.

As films go, it's a loaf of immaculately white bread accompanied by pre-sliced cheese. Devoid of peanut butter and jam, yep, but also -- more critically -- made up of squares.

It starts off interestingly enough in the early 1940s, with the tall and impressively-built Chris Evans made to look like Martin Short, the young man's face digitally shrunk onto a tiny and frail 'weakling' body. Not knowing when to back down from a fight, puny Steve Rogers keeps getting his lights punched out and his enlistment forms turned down until a German scientist called Erskine sees his pluck and is curious enough to see more.

Stanley Tucci plays Erskine perfectly, and despite wading through a monstrously exaggerated accent, shines in the film's finest performance. His scientist is a German emigre, one who has fled with his soldier-enhancing super-serum because he has seen the alarming effects it has on bullies. In Rogers the runt he finds a brave and noble fighter, albeit a pint-sized one who, in uniform, looks curiously like Sad Sack. 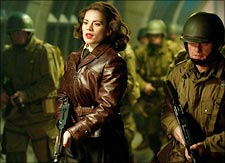 The bully he had first experimented on, on the other side of the tracks, is Johann Schmidt, a Nazi so ambitious he thinks Herr Fuhrer is a wimp. The unperfected serum melted Schmidt's face off, giving us one of the most visually striking villains of the Golden Age of comics, the Red Skull. Hugo Weaving is the right actor for the job, sinister and effective but -- as we see in the fight-scenes -- never truly intimidating or fearsome. Never enough of a threat.

The serum, is, like bhaang, an enhancer of what already lies within: it makes the good better and the bad worse, thus transforming the scrawny Rogers into the tall super-jock, made genetically bespoke to fit into the classic Captain America uniform.

Evans, so far extremely likable, loses all that makes him interesting when acting with his own body, and the rest of the film feels more drab than it should. (Also, now that we're making films about feeble men having their bodies amplified by machines, perhaps it's worth a thought casting a normal-bodied man and applying digital steroids to make him unrealistically perfect, instead of the other way around.)

Some fun is had in these portions, however, as Captain America, like Donald Duck at the time, is used to sell war bonds, dancing with star-spangled chorusgirls. In a particularly stirring aside, a soldier on the front lines is shown reading a Captain America comic book. It's the film's truest boast: Cap might not be the edgiest man on the Marvel roster, but was historically vital, a slugger who socked Hitler in the jaw. (So what if blonde, blue-eyed buffed-up Rogers looks disconcertingly like Adolf's Aryan ideal?)

The rest of Joe Johnston's uneventful film is basically a lazily written stepping-stone to set us up for next year's massive Avengers movie, one where several of Marvel's top heroes join forces. Most of their recent films have nudged and in-joked their way towards next summer's tentpole release, but so blatant is the advertorial nature of Captain America that the now-traditional, post-credits 'easteregg' scene is not a scene but an actual trailer. How fitting for the propaganda man.

As said, there's enough for true believers to smile at. We meet hotshot scientist/industrialist Howard Stark, cleverly modelled on the early, dashing Howard Hughes, but the focus is on the last name, as we know his son -- as Tony Stark, Iron Man -- will deliver us from superhero-movie malaise. Cap America's first scramble across the roofs of New York cars is a clear hat-tip to Sam Raimi's first Spider-Man film, and the obligatory Stan Lee cameo is actually funny this time, hurrah.

And while there is earnest efficiency on show, there's very little that's truly memorable. Haley Atwood, playing the feisty Peggy Carter, looks appropriately like a vintage pin-up but remains a girl who merely watches Cap cravingly from the sidelines. A strong and sassy mouth, sure, but sadly just a groupie in uniform.

A word here about the look of the film. The production design is detailed and nuanced, but constantly anachronistic. The technology and the laboratories look not just like something beyond their time, but -- especially on the Nazi side of the fence -- like something well beyond ours. It brings to mind the wonderfully loony but beautiful Sky Captain And The World Of Tomorrow, a decidedly fun film that knew what it was doing.

This film -- between Erskine speaking lovingly about Schnappes and his being shot by an assassin taking acting lessons from the weasels in Who Framed Roger Rabbit -- has no clue what kind of film it wants to be, whether it's Indiana Jones or Star Wars. The cynical but true answer, as said above, is an advertisement.

It was always going to be hard, obviously. It's impossibly difficult to make a great film about a superhero who uses a country's name as his own. And everyone ain't Shekhar Kapur.