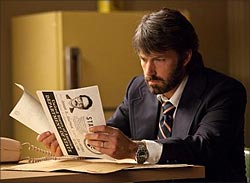 Wonderment is the cornerstone of the Hollywood we know and love (and are frequently exasperated by). The magical escape cinema allows, the willingness with which we surrender to surreality and to nonsense, the way we -- gladly, gratefully even --believe in what we choose to, regardless of plausibility or reason.

Sometimes, what we are made to buy into is pure lunacy. And sometimes it's even madder: the real thing.

Ben Affleck's Argo, set during the Iranian hostage crisis of 1979-1981, is a loosely, dramatically retold true story, one blurring the line between fact and farce which such mastery that the actual recorded facts seem nearly inconsequential.

Near the finish of this film, one character quotes Karl Marx, another asks if he meant Groucho, and, after the laugh, I left the theatre wondering that -- when all is indeed done and dusted -- which of those two namesakes mattered more, struck at genuinely weightier truths. But I digress: Argo is a masterpiece.

The Iranian revolutionaries, the Komiteh, storm the US Embassy in Teheran. The Americans are genuinely outnumbered, their marines helpless, as the revolutionist take over the building, taking nearly 50 Americans hostage.

And it is up to the CIA and its exfiltration experts to figure a way to smuggle them out before they are caught and beheaded.

The doomed ideas tossed around the table sound awful, amateurish, worthy of slapstick: one of them involves smuggling in bicycles. It is here that exfil specialist Tony Mendez (Affleck), the shaggy-haired hero of this feature, suggests what is referred to as "the best bad idea" American Intelligence has: faking a movie.

Argo, short presumably for argonaut, is a hackneyed blockbuster script that involves, among disrobed princess and attacked citadels, chases through an exotically Eastern bazaar. It fits the bill concocted by Mendez and Oscar-winning prosthetics expert John Chambers (John Goodman), and is cunningly co-opted by producer Lester Siegel (Alan Arkin), a poster is made, advertisements placed in Variety.

Despite the broken down sign, Hollywood is still the best manufacturer of falsehood in the world, and Mendez and his fake film crew go about lying to the press to help them spread the fib farther. The idea is that Mendez enter Iran, help the diplomats in hiding to pretend they are indeed a crew scouting for locations, and leave Iran before the Komiteh can piece things together -- and piecing things they are, very sinisterly indeed.

It is an urgently told film, one that recreates in macabre detail the situation as seen in file-footage and news photographs: one where bodies are hung in the town square and where gentle folk leave their wine and scurry into crawlspaces. Rodrigo Pieto's cinematography is mostly claustrophobic and occasionally expansive, and goes brilliantly with Affleck's frantic but unhurried style which takes its own time to built up to a climax of relentless breathlessness. And the timebomb ticks on with excruciating, exquisite inevitability.

It is an incredible account, and Affleck runs magnificently with it, allowing Chris Terrio's mostly restrained screenplay the breathing space it deserves for some killer dialogue -- Arkin has the film's most quotable lines, about how the Iranian revolutionaries would like CIA blood with their breakfast cereal, about the Ayatollah and the Writers Guild of America, about how he must be an unplanned part of a film -- and crafting, in the process, a film that goes from a Sorkinesque walk-and-talk to a ruthlessly rat-a-tat trot and, finally, a full blooded gallop. The dramatic escalation at the film's finale is unbelievably, spectacularly rousing, but made so only by the smaller details that precede it.

For Argo is a film of superb, fastidious nuance. The nods to diplomats out on assignment compelled to find wives among fellow staffers. The sneer with which an immigration official crosses out the word Kingdom from Iran while granting a visa. The way even a revolutionary pauses at images of Rocky Balboa and Ted Kramer in a magazine. The importance of being allowed a mid-air drink.

Affleck alternates between soft and harsh beats, starting with a historically grounded assault and then expertly flipping back and forth: deadly news reportage is spliced alongside a line-reading of the B-movie, bad dialogues of crushing gravitational fields contrasted with hostages forced into the ground. And then there's the hilarious, rallying war cry for the renegade team: one involving the film's title and one that, reassuringly enough, makes its way from reality to the script and not the other way around.

Peopled by a striking ensemble -- Bryan Cranston, Victor Garber, Philip Baker Hall, Clea DuVall, Chris Messina are all there and in fine form, especially Cranston -- Argo tells a staggeringly peculiar story, and tells it with violent tension and extreme cleverness.

Affleck's direction is emphatic, self-assured, manipulative in the most effective of ways, and crucially tinted with irony. It is as the film's music winks, midway through: it isn't enough merely to Swing for the fences, unless you back yourself to be the Sultans. The Top 10 Films at the Telluride Film Festival 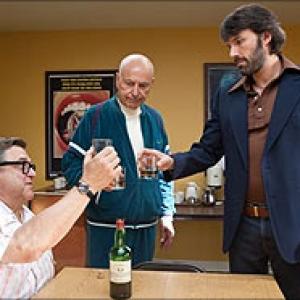 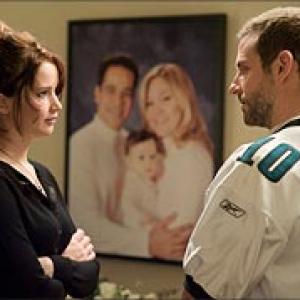