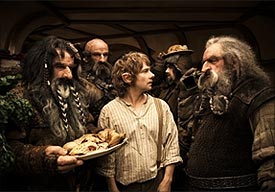 Bloated and overdrawn aptly describe the lavishly made prequel to Peter Jackson's The Lord of the Rings. Yet, The Hobbit: An Unexpected Journey could win massive audiences worldwide thanks to its terrific action scenes and a handful of performances by Lord Of The Rings veterans, especially Ian Holm and Ian McKellen.

Big stardom awaits Martin Freeman who plays the pivotal role of Bilbao. The film, with its stories flying in different directions, is a mess but a glorious mess at that.

It is opening in many parts of the world on Wednesday, December 12, and on Friday, December 14, in India and North America. In all, by Friday, it could be showing on some 10,000 screens worldwide, with at least 4,000 of them in America and Canada.

The Hobbit, An Unexpected Journey, the fantasy extravaganza based on JRR Tolkien's popular classic, which is the first of the three Lord of the Rings prequels, certainly does not equal the grandeur and pulsating drama of the three films that preceded it.

But filmmaker Peter Jackson could have yet another super hit. Despite this, Hollywood expects the film to gross $1 billion and make 2012 an unprecedented year at the box office with three films exceeding the magical $1 billion mark worldwide.

Of these, The Dark Knight and The Avengers are both available on DVD while the biggest James Bond thriller, Skyfall, which has grossed $930 million worldwide (and is yet to open in the lucrative territory of China), is expected to reach the milestone in three weeks.

Even if the film, which cost about $350 million to produce and market, were to make some $800 million worldwide, it would be a very profitable venture especially when the ancillary sales are factored in.

Bilbo (Martin Freeman, with Ian Holm reprising his Lord of the Rings role as the older Bilbo) is not keen initially to hit the road after wizard Gandalf (Ian McKellen showing up in his own Rings role) and dwarves seek to enlist him to retake a dwarf mountain kingdom from the dragon. So we meet once again Gollum (Andy Serkis, re-creating the character in The Rings)

The new film also brings in a few other Rings favourites, some who didn't appear in the Hobbit book. These include Elijah Wood as Frodo Baggins, Cate Blanchett as elf queen Galadriel, and Christopher Lee as wizard Saruman.

Before it could create any box office records The Hobbit is creating a controversy, and it has to do with shooting the film with a frame rate of 48 images per second, double the 24 that cinemagoers have experienced for the past century.

Director Peter Jackson, who is reported to have spent over $25 million of his own money to perfect this technology, says the higher frame rate is supposed to make fast action scenes look smoother. But as one tech critic pointed out, the image is so crystal clear that it can dispel the illusion of the fantasy world.

The new format is available in only 400 of the 4000 screens the film will be on in North America. Theatres in the US aren't charging extra, though the format is offered only as part of 3-D screenings, which cost a few dollars more than regular tickets. The 3-D format will cost $15-$18 in major American and European cities, depending on the hour of the shows.

While the box office success of The Hobbit is not in doubt, many wonder if it could garner major Oscar nominations given the fact that many major reviewers do not seem to be very impressed with it.

In the UK, critics were far from enthralled, though the film received two and half stars out of four from major critics.

In The Telegraph, London, Robbie Collin described it as 'so stuffed with extraneous faff and flummery that it often barely feels like Tolkien at all - more a dire, fan-written internet tribute.'

He added: 'The stuffing is required because Jackson and Warner Bros have divided Tolkien's fairly short story into three incredibly long films, which will mean vastly inflated box office revenues at the small cost of artistic worth and entertainment.'

The Guardian said that the duration of the film will test audiences. Peter Bradshaw gave it three out of five.

'So Tolkien's gentle tale is going to be a triple box-office bonanza, occupying the same amount of space as the mighty Rings epic, an effect achieved by pumping up the confrontations, opening out the back story and amplifying the ambient details, like zooming in on a Google Middle Earth,' Bradshaw wrote.

He felt the 3-D effects gave the film a 'much higher definition and smoother movement effect.'

The film's dazzling new technology has had a mixed reception. 'The result is some eye candy that truly dazzles and some that utterly distracts, at least in its test-run of 48 frames a second, double the projection rate that has been standard since silent-film days,' wrote the syndicated critic David Germain, a very hard to please writer.

'It's also overstuffed with, well, stuff. Prologues and sidestepping backstory. Long, boring councils among dwarves, wizards and elves. A shallow blood feud extrapolated from sketchy appendices to JRR Tolkien's The Lord of the Rings to give the film a bad guy.'

Audiences often reject critics when it comes to big films with epic stories and dazzling special effects. Even thrillers can be included in this category. Skyfall did not get uniformly good reviews and yet it is making nearly twice the money of the previous most successful James Bond film.

There are many wow moments in The Hobbit. Add to this the goodwill created by the massively popular Rings movies, and some solid acting, and the fascination with the theme of good vs evil, and you don't have to be a Cecil De Mille to smell a solid hit. But at the Oscars, the other Warner Bros stablemate, the big budget Dark Knight has a big advantage over The Hobbit. It was not only a box office champ but a solid favourite of major critics. 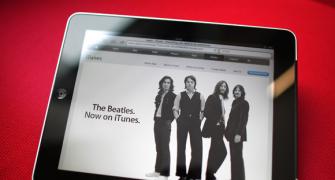 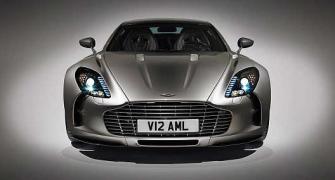 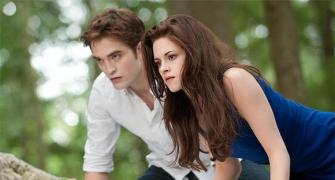 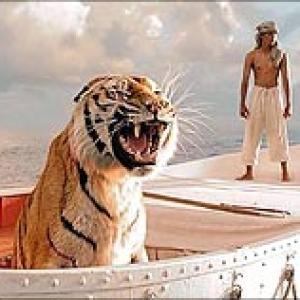