Puja Gupta gets ready for F.A.L.T.U. 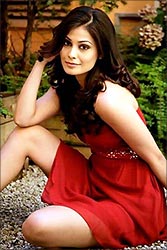 Debutante Puja Gupta is happy. Not only is her first Hindi film F.A.L.T.U. is releasing tomorrow but also because her character in the film is very much like her real self.

The F.A.L.T.U. shoot took her back to her college days, and gave her back what she had almost missed -- Puja had dropped out of college to contest in Miss India in 2007.

of Vashu Bhagnani, who is producing the film.