News
Business
Movies
Sports
Cricket
Get Ahead
Money Tips
Shopping
Sign in  |  Create a Rediffmail account
Rediff.com  » Movies » 'Karan has changed completely from the boy I grew up with'

'Karan has changed completely from the boy I grew up with'

'Today, as a film personality, he is bigger than Dharma Productions.'
'But he is still warm and loyal to his friends from school, college and work.' Karan Johar turns 50 on May 25, and film-maker Nikkhil Advani, who has known him since school, owes his career to him.

Advani assisted KJo on Kuch Kuch Hota Hai and Kabhi Khushi Kabhie Gham, and made his own directorial debut with Kal Ho Naa Ho under the Dharma Productions banner.

Nikkhil tells Rediff.Com Senior Contributor Roshmila Bhattacharya, "I'm waiting for Rocky Aur Rani Ki Prem Kahani because I know Karan will rock the world with his next directorial... He understands that after the pandemic, people want to see happiness, and he has gone back to what he does best. He owns that space and I know he will rewrite the rules and set new benchmarks in the genre." Karan and I were together in Mumbai's Green Lawns High School; he was in the batch junior to me.

We were in the same house.

Since Karan didn't play sports like us, he got bullied a lot, even though he won all the debates and elocution competitions.

I remember both Karan and Apoorva Mehta (the present CEO of Dharma Productions) were standing for head boy and Karan was busy making posters for his best friend.

After we passed out, I went to St Xavier's college, he to HR college. He would do fashion shows with some of my friends like Anaita Shroff. When he was assisting Adi (Aditya Chopra) on Dilwale Dulhania Le Jayenge, we met backstage at the Screen Awards.

On learning that I was assisting Sudhir Mishra on Iss Raat Ki Subah Nahin, Karan told me he wanted to bounce off a script he'd written.

I lived on Warden Road (south Mumbai), and went over to his place in Nepean Sea Road (also in South Mumbai) where he narrated the first half of Kuch Kuch Hota Hai to me.

Karan was looking for an associate director and I joined Dharma Productions in 1998.

We had started shooting Kuch Kuch Hota Hai and en route to Ooty for a recce, I pointed out to him that while I knew that Anjali (Kajol) was engaged to Aman (Salman Khan), but that she would meet Rahul (Shah Rukh Khan) at the summer camp, I did not know what happened post interval.

During that two-and-a-half-hour drive, through 14 hairpin bends, Karan, who knew the script by heart, narrated the entire second half, complete with everyone's dialogues, including Farida Jalal, Reema Lagoo and Johnny Lever.

I've had the good fortune of listening to narrations by Karan, Adi and Anurag Kashyap, they are the best! As I keep telling my young assistants and associate directors, we worked without laptops, I-pads, walkie talkies or even mobile phones then. So we had to be more organised and always on our toes.

Karan would tell me he wanted to shoot a scene like the one in Raj Kapoor's Prem Rog, and having seen the same films as him, I'd know instantly that he wanted to track in on a 75 lens with the foreground moving and would cue the DoPs and production designers accordingly.

I remember Kiran Deohans (director of photography, Kabhi Khushi Kabhie Gham) complaining once that I was like a wall between Karan and him.

I protested saying Karan was more comfortable communicating with his DoPs and technical team through me.

He wanted bubblegum and candyfloss in Shah Rukh, Rani and Kajol's costumes when they were on campus.

Even the summer camp was a riot of colours, like Riverdale and Little Lotto.

Back in 1998, we styled and shot the film like a comic book.

'Shah Rukh would talk to us about Hey! Ram and Devdas on our sets' By the time he did Kuch Kuch Hota Hai, Karan had worked with Shah Rukh in Duplicate and DDLJ, and done his costumes for Dil To Pagal Hai, so they understood each other well.

Shah Rukh trusted Karan blindly and let us guide him through Kuch Kuch Hota Hai because, as he admitted, he had no idea what this genre was about.

He would talk to us about Hey! Ram and Devdas, the kind of cinema he loved, on our sets.

Being an intelligent man, he knew that given his superstar status, a scene would be tailor-made for him.

But he also understood that it would fall flat if the others in the frame were not as good.

He worked closely with Karan to make newcomers like Rani and Sana Saaed (who played his daughter) comfortable. After Kuch Kuch Hota Hai, Adi asked me to assist him on Mohabbatein.

I did it on the condition that I'd go back to Dharma Productions once it was done.

But on my 30th birthday, in 2001, Adi called and said he wanted me to be the first outside director of Yash Raj Films since he'd turned producer.

And would you believe, I refused Adi and YRF because I had promised Yash (Johar) uncle that I would assist Karan on Kabhi Khushi Kabhie Gham.

I think Adi respected me for the decision and Shah Rukh told Yash uncle that I should direct the next film he did for Dharma.

'We spent our entire art budget on the song Bole Chudiya' When Kabhi Khushi Kabhie Gham started, Yash uncle told me that when his son's name comes up at the end, the audience should give him a standing ovation even if the screen had been blank for three hours.

Karan, heavily influenced by Yash Chopra, wanted to make the biggest multi-starrer ever,

Since he had access to Amitabh and Jaya Bachchan, Shah Rukh and Kajol, Hrithik (Roshan) and Kareena (Kapoor), he wrote Kabhi Khushi Kabhie Gham with them in mind.

I pointed out to Karan that if he made this film, it would have to be the biggest India had ever seen.

He knew that because when I showed him a few locations in the UK, including Waddesdon Manor in Aylesbury, owned by the National Trust and managed by the Rothschild Foundation, where no one had ever shot, telling him it would be good for Duggu and Bebo's King's College, Karan said, 'No, this is Yashvardhan Raichand's (Amitabh Bachchan's) mansion.'

Shah Rukh's introduction scene had him coming in a helicopter, a second helicopter filming the first.

Yash uncle had put the budget I had made in his pocket without comment, but on the first day, when we were shooting Bole Chudiya with the six stars at Filmistan Studio in Mumbai, he called me and said, 'You remember the art budget you had given me?'

'Well, you have spent it already on this one song. But continue making the film the way you have visualised it,' he said.

Everything about the Kabhi Khushi Kabhie Gham is iconic. After Kabhi Khushi Kabhie Gham, I got a chance to direct for Dharma Productions.

I was writing an action thriller, but Yash uncle felt Karan and I should continue in the same space as Kuch Kuch Hota Hai and Kabhi Khushi Kabhie Gham.

Karan had a script ready and called me to his office to narrate it.

I liked it and we went ahead with Kal Ho Naa Ho.

The film would have been a blockbuster with any director because it had all the ingredients of success, inherent in the script and dialogue.

Also, by then, Yash uncle had decided every Dharma film would have a certain standard, and we were the first Hindi film unit to shoot in New York when everyone was filming in Europe.

We started with a four-day schedule at the Community Centre, with Shah Rukh, Achala Sachdev and Zohra Sehgal.

After a day, Shah Rukh had to leave, to attend to his ailing back.

When he learnt that he would have to undergo surgery in February, he wanted us to replace him, even offering to speak to Aamir (Khan) or Salman (Khan).

We insisted that we would wait for our angel even after he warned that he would need around six months to recuperate.

We went back to New York only in June, with him. Karan had told me that since we were making a love story, he hoped I would get a song as good as Kuch Kuch Hota Hai.

Afterwards, Javed (Akhtar)saab came in and told us, 'I don't think you guys realise what you have done.'

He took four months to write the lyrics, narrating them to me when I was returning from New York, at JFK airport.

Earlier, I had dashed down from Pune with the music track, going directly to meet Karan.

He heard it and said, 'You have a song better than Kuch Kuch Hota Hai.'

I was with Karan till 2004, after which we went our own ways.

'Karan has gone back to what he does best' Karan has changed completely from the boy I grew up with.

Today, as a film personality, he is bigger than Dharma Productions.

When he walks into a room, all heads turn. But he is still warm and loyal to his friends from school, college and work.

I'm fortunate that despite everything we have been through, I can pick up the phone and call him, knowing he will answer. If I tell him I need him to see an edit, he will come immediately.

Even today, many people, including those who loved D Day and Batla House, ask me why I don't make another Kal Ho Naa Ho.

My answer to them is that if I could, it wouldn't be the cult film that it is.

Funnily, Karan and I talk of collaborating all the time, but given that, there will always be comparisons with Kal Ho Naa Ho.

If we come together after 18 years, the film should be something special.

Meanwhile, I'm waiting for Rocky Aur Rani Ki Prem Kahani because I know Karan will rock the world with his next directorial.

He is very perceptive.

He understands that after the pandemic, people want to see happiness, and he has gone back to what he does best.

He owns that space and I know he will rewrite the rules and set new benchmarks in the genre.

My daughter Keya is 15, and I'm glad she will see vintage Karan Johar soon. 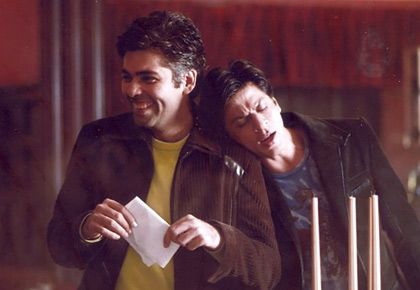 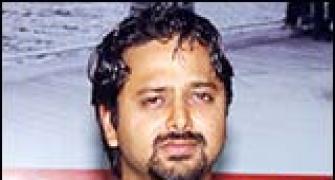 'KHNH bigger than K3G? I hope!'
The Making of K3G
Karan Johar Talks To Pritish Nandy 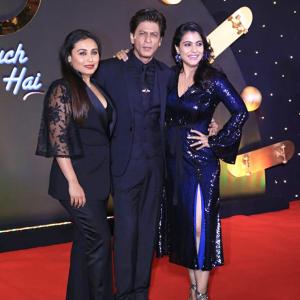