Want to know more about the Crusades? 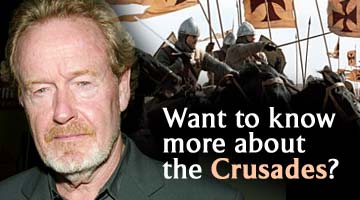 Ridley Scott is probably wondering why he didn't opt for a sequel to Gladiator.

Picking Kingdom of Heaven has, apparently, led some critics to label his work 'complete fiction', and others to accuse him of stealing the plot from a researcher.

Given this scenario, Russell Crowe in a skirt would seem a lot simpler.

Then again, maybe this is just what Scott (above) wanted.

There was no way he -- or the Hollywood executives funding him -- could not have known that a film about the Crusades wouldn't be greeted with a million smiling faces. And even if they assumed it would be welcomed, the death threats during filming must have changed that perception quickly.

Does pitching Muslims against Christians on a big screen sound like a good idea?

Does it sound like a better idea at a time when relations between the Arab world and the West aren't exactly beautiful?

Does it make a difference at all that the actual Crusades happened sometime in 1099?

The answer to these is an emphatic No.

But Scott went ahead anyway. He says he wanted to change Western attitudes.

The result: One historian says the film presents 'bin Laden's version of history,' while others accuse it of distorting history and Christian-Muslim relations. Again, picture Russell Crowe in a skirt. So much simpler.

Before you buy your ticket to Kingdom of Heaven and take a stand -- stone in hand or otherwise -- a quick look at the Crusades should sort out a few things.

What exactly were the Crusades?

To begin with, there wasn't just one 'crusade'; there were over seven! They were actually military campaigns, mostly endorsed by the Popes, from the 11th to the 13th centuries. These campaigns started out as endeavours, on the part of Roman Catholics, to take back the holy land of Jerusalem from the Muslims.

However, some -- such as the Fourth Crusade and the Albigensian Crusade -- were also directed against other Christians. They weren't exactly the most level-headed warriors, obviously.

Why do we call them the Crusades?
While we have grown accustomed to using the term to describe just about any moral cause, the people who originally participated in them weren't known as crusaders. They were referred to -- at different times and places -- as Milites Christi (the Knights of Christ) or Fideles Sancti Petri (Faithful of St Peter). They thought of themselves as pilgrims journeying to Jerusalem.

Each took a vow that was to be fulfilled on reaching the Holy Land, and a cloth cross (crux) was sewn into their clothes. The act of 'taking the cross', or crux, was eventually associated with the journey, which is how the word evolved.

The interesting thing is that connotations of the word -- righteous campaign to stamp out evil -- find an equivalent in the Arab term 'jihad'. Which also tells us why Ridley Scott is not a pin-up star in the Middle East at the moment.

The Kingdom Of Heaven is near

Why do the Crusades always sound familiar?
Blame it on popular culture, and its astonishing ability to water down history into a big puddle of kitsch. With time, the Crusades have come to be regarded as a series of heroic adventures.

Like that of Richard the Lionheart versus the lone adversary Saladin.

The campaigns, and those who took part in them, have long been romanticised. It's why a lone crusader, today, is an Ajay Devgan-like figure that women quickly fall in love with. Sigh.

What were the individual campaigns referred to?
It wasn't terribly complicated. They were called the First Crusade, Second Crusade, Third Crusade down to the Ninth .

While they raged, there were other minor crusades, such as the People's Crusade, German Crusade, Albigensian Crusade, and the Shepherds' Crusade. Whole other stories, really.

So, why did they happen?
As you may have guessed by now, this is anything but an easy question. In a nutshell: Picture a crumbling Byzantine Empire. Now, picture Muslim armies growing in strength. Cut to the Vikings, Slavs, and Magyars of Europe, all of whom had long been converted to Christianity.

there were lots of warriors, and not many enemies to fight. Warriors, being warriors, had a whole lot of pent-up energy to deal with. They promptly turned on each other.

The Church tried to control the violence, but didn't manage very well. So, when the Byzantine Emperor Alexius I asked for help in controlling Muslim attacks that were pressurising the Byzantine Empire, there was a large group of people happy to help.

Another request came from the Reconquista in Spain -- the military re-conquest of the Iberian Peninsula by Christian rulers -- for warriors to fight against the Islamic Moors. In 1063, Pope Alexander II promised an indulgence to those killed in battle. And, in that time-worn cliché, all hell broke loose.

I'm confused.
As you should be. Blame Pope Urban II.

He was asked, by Emperor Alexius I, for soldiers to help resist Muslim advances into the Byzantine Empire. The Pope, in his enthusiasm, offered a lot more help than was required. The mandate given to the warriors was this -- don't just defend the Byzantine Empire, regain control of Jerusalem.

What the Pope wanted to do was reunite Christendom, strengthen the Papacy, and control the East. A tall order. And one that, predictably, unleashed a huge wave of fury.

This is how the First Crusades began.

What were the other crusades like?
Noise. Blood. Madness.

But, let's start with the First. Armies marched to Jerusalem, took control in 1099, and promptly massacred the population.

After a short time of peace, the Second Crusade began when Bernard of Clairvaux called for help in re-taking the town of Edessa from the Turks.

By 1187, Jerusalem had been recaptured by Saladin -- also called Salah al Din, mighty warrior and founder of the Kurdish Ayyubid dynasty of Egypt and Syria.

Pope Gregory VIII wanted a crusade led by Europe's most important leaders. They tried, almost succeeded, then established a truce with Saladin.

The Fourth Crusade was initiated by Pope Innocent III in 1202, with the intention of invading the Holy Land through Egypt.

By this time, all following crusades began to be seen simply as the Papacy's struggle to divert Europe's military energies toward Syria.

By the Ninth Crusade, Antioch, Tripoli and Acre had fallen, removing all traces of the Christian occupation of Syria.

What did it all accomplish?
Apart from the devastation, you mean?

The Crusades had a massive influence on the European Middle Ages.

By the 14th century, traditional Christendom was fragmented, much Islamic thought was transferred to the West, and the Renaissance in Italy was underway.

It had a larger effect on the Muslim world.

Saladin has been venerated as a hero since, while the campaigns have been referred to as cruel attacks by Christians upon Islamic culture.

The Crusades also affected the Jewish community. Atrocities against Jews became part of anti-Semitic history, leading to centuries of ill will among both sides.

This was one long story with no happy ending.

Should we go watch the film, then?
Of course. Whether Ridley Scott manages to stick to history or not may not be the issue.

If Kingdom of Heaven works, it may do so simply by reminding us all of the folly engendered deep within the spirit of the Crusaders.

For more on the Crusades:

A History of the Crusades and Crusaders

Bibliography of Literature on the Crusades