News
Business
Movies
Sports
Cricket
Get Ahead
Money Tips
Shopping
Sign in  |  Create a Rediffmail account
Rediff.com  » Movies » 'Filmmaking is not a one man show'

'Filmmaking is not a one man show'

He is a filmmaker who doesn't need an introduction.

In his office three days before the release of his new film Guru, Mani Ratnam appeared quite relaxed.

And he spoke extensively on inspiration, song picturisation, films he liked and, of course, Guru. It's been a while since Mani gave an exhaustive interview, and here are some excerpts from his conversation with Shobha Warrier:

Let's set the record straight. Is Guru based on Dhirubhai Ambani's life?

No, it is not based on Ambani's life. It could be based on any businessman.

So should we use the word 'inspired'?

It is inspired by several people. It could be anyone who has moved from rags to riches, anyone who is ambitious, anyone who has climbed up, anyone who has broken ground and created a new path. Like any fiction, Guru is based on reality. You will be able to draw parallels, but it is not the life story of any particular individual. If it's based on any person, it becomes his biography.

Gurukant could be him (Ambani), he could be (Lakshmi Narain) Mittal; he could be anyone who has risen to the top. It is the story of the spirit of a person who is willing to reach the top, and not willing to say die. He is one person who can earnestly fight. Yes, questions are asked all the time; moral questions of what is right and what is wrong. Guru is the journey through that character.

Are you questioning that journey?

No, I am just telling a story. I am just narrating the journey. In the journey itself, there will be questions. The film and I don't take a stance. It reflects the time period. India was different in its mindset soon after independence. We were little more socialist then, sacrifices were important and individual was not important. Today it is not like that, and youngsters are not ashamed of being ambitious. I think we can be ambitious. That is how we can beat the world. They call it the killer instinct. So, we have imperceptibly changed over the years, and this change is seen through one character.

Is there a reason for not taking a stance? 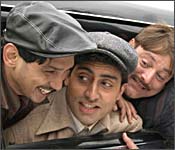 Something is happening in front of our eyes, a change from this side to that side. What I thought right then and what we all think right now are slightly different. I am taking a few steps back and looking at it. I want the audience also to travel the journey he travelled. I want them to be in his shoes and see the growth.

Where does that leave you, the filmmaker? Are you also with the audience looking at the man's growth?

As an audience, as a filmmaker, I am seeing his point of view. I am leaving 'me' and trying to get into Gurukant, hopefully along with the audience, and see why he changed, listen to the questions posed to him and the answers he gives. You can accept them, you can reject them but you have to give it a look because that is happening today. The questions are all there in today's society.

I am just an observer like a journalist, like a novelist who looks at something analytically. The biggest advantage of making films is you get into somebody's character. You have an opportunity to be somebody else, other than your rational self. You can be someone totally opposite to what you are and lead his life. You then exist, think like, write like that person and understand what and who he is.

Writers express themselves through words but a filmmaker can only use other people to express his ideas. Does that process turn out exactly as you plan?

That is the difference between writing and filmmaking. Writing can get into stream of consciousness and the characters can think through your writing. Yes, in filmmaking, the characters have to behave. What you can say in sentences, we can say in close ups.

What do you do when they cannot express what you want through expressions and silences?

Filmmaking is not a one man show. It is not like I'm thinking something and they are expressing it. I try to pull the actor in and together we try to get the expression. It is not my thinking alone, it is our thinking. The actor also becomes a part of the thought process. I make them be the character, think like the character and feel the character.

It is not generally pre-planned; it has to happen spontaneously. It can change from take to take. So, contrary to what you said, an actor can enhance what I really want to convey. That is why casting is fifty percent of my job. 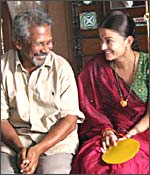 You see the film and then ask me the same question. If you think they have not performed then we will talk again. I cast them because I felt they are right for the character. I think they can deliver and we together can get something special. Being stars and popular should not go against them. It is not a negative factor. If they don't deliver, you ask me that question again.

Many filmmakers say stars are vital to get audiences to theatres. What do you say? Your films are always known and marketed as Mani Ratnam films.

Certain subjects are best done with stars. Certain subjects like Alai Payuthe are done with non-stars. In such films, stars are a burden. In a film like Kannathil Muthamittal, I can't have a Rajnikanth or a Kamal Haasan. If you have a star, the expectation of the film is different. So, you cast according to the subject of the film. Some films are best done with stars because it gives you a base on which if you can get the correct performance, you can reach higher.

When did the basic spark about this character come to you?

Most ideas remain inside you for a while. You tell somebody when there is a spark or a thought, and leave it at that. You come back later, write down a few lines. I makes note in my mind on whether it can be made into a film or not. After a while, you take it again and structure it in three or four pages and see whether it becomes a story, and whether you can define the characters a little more. Then you may do something else, and come back after 6 months or one year to see whether it still makes sense to you. Only when things fall into place do you make a film. The gestation period could be something like 3 years.

Did Abhishek Bachchan's face come to your mind when you started writing?

When I started writing the screenplay, he was the first person I thought of. Then I told him this is what I am planning and if he is interested, I want 3-4 months at a stretch because I need him to be the character.

Was it because you were impressed with his work in Yuva, or was it his personality that attracted you?

I think he looked right for me. The fact that he has done Yuva just meant we worked well together. We know that we can deliver together. That makes a working relationship easier. It was an instinct that told me he was the right person and I followed the instinct.

Is his wife meant to be a beautiful woman?

She is a realistic woman. I didn't write in the script that he is married to a beautiful woman and therefore we got Aishwarya. No, it is not that. He gets married to a strong woman and her strength helps him in his growth. So, we needed somebody who can do that.

This is a very realistic character and something different from what Aishwarya has been doing. She has to look like a village girl first, and then a middle aged housewife in a small town. Then she grows to become 45-50. So, she had to do that kind of range, and she was ready to do that. 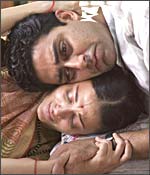 When did you decide that this will be a Hindi film?

That also comes very early on. Here was a small town guy becoming big all over India, and he is based in Bombay. If I have to do it in Tamil, I have to get all the characters around him speak Tamil. Everyone he meets has to speak in Tamil, so I had to find devices constantly as to why all of them speak in Tamil.

We have dubbed it in Tamil, and it won't look like a dubbed film as a lot of effort has been taken to make it look realistic and rooted. We are quite happy with the product. I have dubbed it in Telugu also because these languages take dubbing well.

Just a few more days for the release. Is the feeling any different from what you felt when you were waiting for your first film to get released?

I feel jittery when I have to go for the screening. So I don't go there (laughs). That is a nerve-wracking experience. It is very difficult to go through. I've stopped seeing the film during the release over the last ten years.

Don't miss Part II of our conversation with Mani Ratnam, where the filmmaker talks about shooting songs, the importance of entertainment, and what makes him angry. 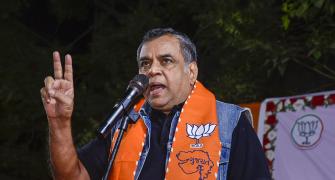 Campaigning ends in Gujarat, over to voters on Dec 1 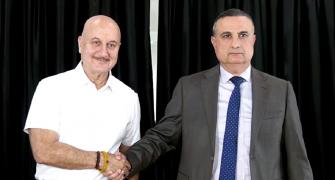 Abhishek: My biggest film yet

Your say: Ash, Vidya or Mallika?