Yet, ami tomake bhalobashi (I love you) is the only Bengali line he can say, and that too with an accent. How did he manage to read his lines in the Bengali film? "I memorised my lines," Shroff tells us.

Shroff, who plays a landlord in Ghosh's film, is all praise for the director. "The zamindar I play in the film was [loosely speaking] the director himself. Ghosh appears [like the film's pivotal character] -- calm and composed and many fail to ascertain the turmoil that goes inside," says Shroff. "If he ever lost his cool, it was like a child crying over his failure to make people around him read his mind."

The actor thanked Ghosh's professional unit for making things easy for him. "I can't thank the unit enough for its great sense of timing. It was in complete command of the situation and instilled great confidence in me."

The unit maintains an impeccable pace, informs the actor, so much so that, "on a particular day, we would do three to four scenes without feeling exhausted."

As for acting with Soha Ali Khan (Shroff plays a demanding and overbearing husband who always forces himself onto his second wife Soha so that she bears his child), the actor says, "She is the perfect heiress to the throne that once belonged to Rinkudi [Sharmila Tagore, Soha's mother]. The film had a few lovemaking scenes which could have gone awry because of our age differences but Ghosh's unit as well as Soha handled them so well that we had a smooth sailing throughout."

Roopa Ganguly, Shroff's other co-star, and the zamindar's first wife, was "an absolute delight to work with. She was always bubbling with enthusiasm, ever eager to help." Whenever Shroff fell short of grabbing the finer nuances of Bengali culture, Roopa offered to help. "With her in the unit -- though we shared only a scene -- I always had an advantage."

"Last but not least," Shroff says, "Abhishek Bachchan, with his fiery eyes and good looks, lent a special flavour to a Nawabi Biryani so well cooked by chef Rituparno Ghosh."

Will Ghosh's 'fare' strike a chord with the film gourmet? We will know when the film releases on October 28. 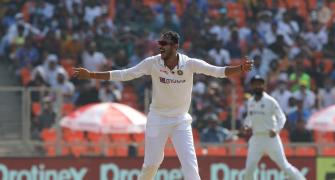 Set on fire after failed gang-rape bid: UP student 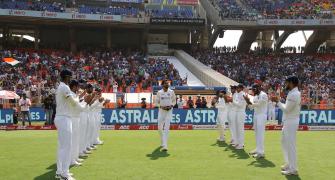